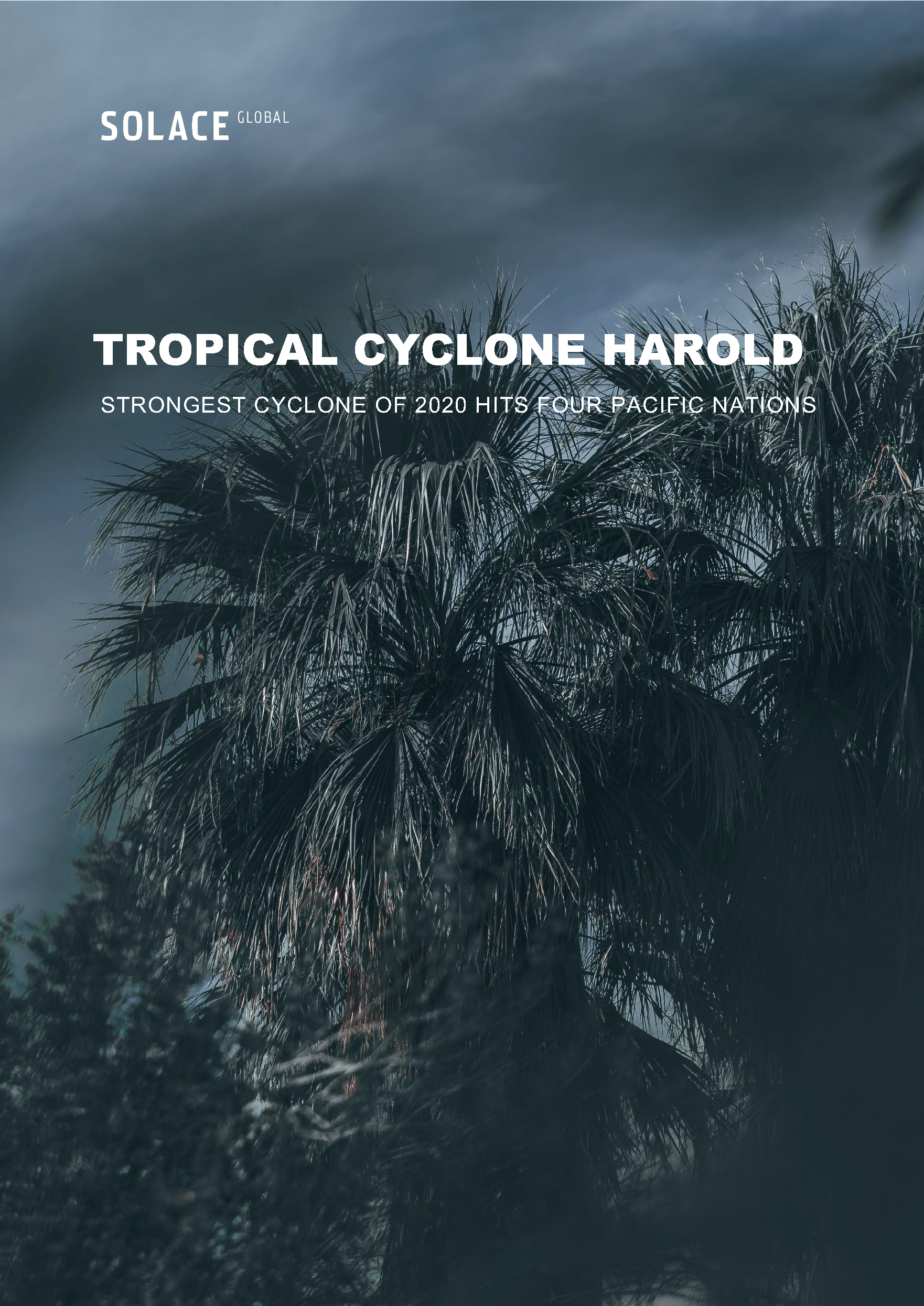 As the world is dealing with the COVID-19 pandemic, extreme weather phenomena continue to affect countries across the globe, destroying livelihoods and displacing thousands. The report takes a look at the strongest tropical cyclone of 2020 thus far, assessing the devastation it caused, as well as the relief efforts, which are complicated by the ongoing COVID-19 pandemic. 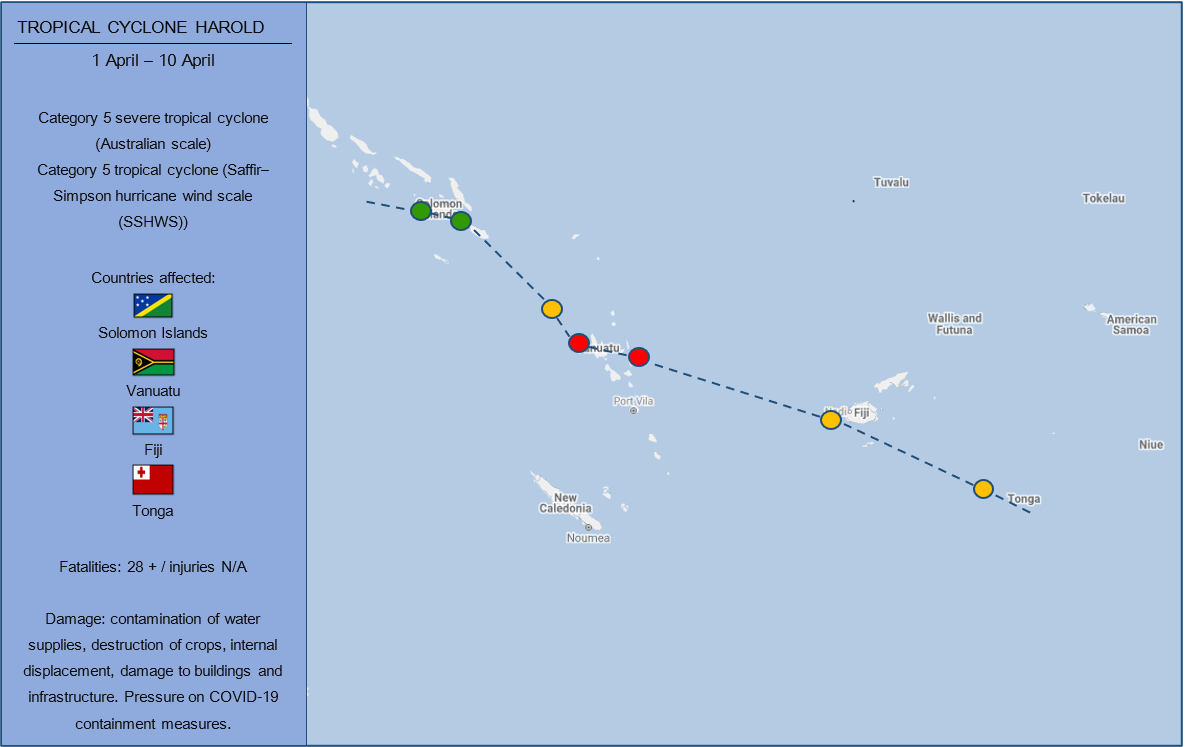 On 2 April, Solomon Islands Meteorological Services issued a cyclone warning to all provinces ahead of the landfall of Tropical Cyclone (TC) Harold. Officials urged communities living near rivers, low lying areas or coastal areas to evacuate to higher ground. Preliminary reports suggested that at least 110,000 people across the islands were affected by the torrential rains, strong winds, and sea surge, combined with several floods and landslides. The most affected provinces were Guadalcanal, Makira and Rennell Bellona, where falling trees caused power outages; major flooding was also reported.

On the same day, during the evening hours, 27 passengers on board the MV Taimareho died after being swept overboard as a result of the extreme weather conditions. The vessel was headed from the capital Honiara to Malaita province while performing a repatriation task, which was part of the government’s COVID-19 response operations. The accident is deemed one of the country’s worst maritime disasters.

After sweeping through the Solomon Islands as a Category 2 tropical cyclone (with a maximum wind speed of 145 km/h), Harold continued to track in a south-eastern direction, reaching Vanuatu the following day. At this stage, the cyclone had developed into a Category 3 storm, causing officials to issue a yellow warning for all communities in Torba and Sanma provinces. Soon after, the emergency warning was upgraded to red, with the government urging all communities living in the vicinity of riverbanks and in low-lying areas to evacuate ahead of what was expected to be a destructive landfall.

By 6 April, it was reported that Tropical Cyclone Harold had increased to Category 5 before making landfall in Espiritu Santo (Vanuatu), with registered winds blowing over 200 km/h. Hours later, the cyclone moved southeast over the Island of Pentecost and, after peaking in intensity, the system weakened again to Category 4.

Satellite imagery shows that Vanuatu’s northern provinces of Sanma, Malampa and Penama suffered the most damage. The storm destroyed large sections of crops and vegetation, whilst also causing power cuts and interrupting communication. In Luganville, Vanuatu’s second-largest city, 90 per cent of buildings were damaged. On Espiritu Santo, thousands of people were affected, with as many as 5,000 forced into evacuation shelters. Moreover, Tropical Cyclone Harold forced the suspension of social distancing and other containment measures implemented in the islands, one of the few nations without a registered infection case, to curb the spread of COVI-19. On 11 April, under the advice of the National Disaster Committee (NDC), the Vanuatu President Tallis Obed Moses declared a second state of emergency to maintain the COVID-19 measures, as well as increase the response to the disaster.

On 11 April, emergency personnel had yet to reach the worst affected communities. Moreover, emerging reports from Vanuatu’s National Disaster Management Office, indicated that more than 159,474 people were affected nationwide. Approximately 53,000 people are now in need of immediate assistance in Sanma, 32,000 in Penama and 40,000 in Malampa. At least one person was killed.

Overnight on 7-8 April, Tropical Cyclone Harold made landfall over Fiji as a Category 4 cyclone and then continued to track south-east towards southern Tonga Islands. The Kadavu and Lau Group of Islands have reportedly suffered the most damages, with major flooding and power outages. Authorities reported several injuries as a result of the storm, while thousands were forced to leave their houses and evacuate to emergency shelters. Updated reports indicate that 155 evacuation shelters are currently active in the country. Damages to crops, buildings and powerlines were reported across the country. On 8 April, Tonga’s Prime Minister Pohiva Tu’i’onetoa declared a state of emergency and relaxed the social distancing measures and curfew that were in place due to the COVID-19 outbreak. Storm warnings were also issued for ‘Eua and Ha’apai.

Initial Damage Assessments and recovery efforts are underway in all the affected areas to assess the full extent of TC Harold’s impact and establish priority recovery requirements. In Vanuatu, the worst-hit country, cargo restrictions due to the COVID-19 have been eased to allow aid into the country. National and international partners are collaborating to address the immediate needs of the communities and provide basic necessities, such as water, sanitation, food and shelter.

For example, sources reported that New Zealand and Australia will deploy helicopters to assist in relief operations. Responders part of the Gender and Protection Cluster (GPC) have deployed to Ambrym, Malakula, Ambae, Pentecost and Santo to provide essential response services such as survivor support, psychological first aid and ensure the protection of the most vulnerable groups. With communications lines starting to be slowly restored, the death toll is likely to increase.

The tropical cyclone season officially starts in November and lasts until the end of April. Whilst tropical cyclones pose a threat of torrential rain and strong winds, most of the damage to life and property is caused by secondary hazards, such as flooding, sea surges and landslides. Tropical Cyclone Harold has been described as the most intense weather event of 2020 and the second strongest storm on record to hit Vanuatu. The tropical cyclone was the first to reach Category 5 this year, with recorded winds of up to 215 km/h and a provisional death toll of 27 people.

The Pacific Islands are in a region that is subject to a number of natural hazards that are becoming increasingly frequent due to climate change.  Scientists observed that warming ocean temperatures and sea-rise levels also contribute to more intense weather events including storms and cyclones. The Pacific Ocean is also experiencing sea rise much quicker than any other body of water across the world; due to their remote geographic location and limited resources, countries in this region are some on the most vulnerable globally. According to the World Risk Index (2019), Oceania is a disaster risk hotspot with Vanuatu, Tonga, Solomon Islands and Fiji ranked respectively, first, second, fourth and tenth most exposed countries to severe natural disasters in the world.

Vanuatu, which suffered most of the damages from TC Harold, has been in the path of strong cyclones in the past. In 2015, Tropical Storm Pam was one of the worst natural disasters in the country’s history, causing 449.4 million USD worth of damage, the equivalent to 64% of the country’s GDP that year. Dozens of people were killed and at least 65,000 were displaced.

While a comprehensive assessment of the impact of Tropical Cyclone Harold is not yet available, the property damage and economic loss are forecasted to be similar to 2015. In addition to the damaged produced by the impact of the cyclone, there are also growing concerns over the impact of the ongoing COVID-19 pandemic on the disaster management and relief efforts. The shelters that have been put in place for the displaced population, where implementing social distancing is impossible, could act as an incubator for COVID-19.

With only limited resources available to handle a large-scale outbreak, preventing contamination in countries and islands with no cases is a central priority to mitigate the severity of the damage. In the past, there have been cases of international relief workers playing a role in spreading diseases among vulnerable populations. For instance, in 2010, peacekeepers played a role in introducing cholera to Haiti after a magnitude 7.0 earthquake struck the nation. The outbreak, which is believed to have started in a UN camp hosting relief workers, killed at least 9,200 people. Thus, as travel restrictions will be eased to allow access to foreign humanitarian aid, comprehensive screening needs to be put in place for relief workers that enter the country and may carry the virus.

Intense weather events affect a number of regions across the world and present a particular challenge to people’s safety. By following critical security measures and advice, their impact can be mitigated.