Protests which began on 19 December following government announced price hikes have continued into their third week and are demanding the resignation of current President Omar Hassan al-Bashir. International monitoring group Human Rights Watch have stated that over 40 people have been killed following the use of live ammunition and excessive force by Sudanese security forces as they attempt to disperse protesters. While travel can continue in the capital Khartoum, travellers should take additional precaution. All demonstrations should be avoided, and a trusted local driver should be utilised for all intracity travel, minimising the time travellers spend on foot. 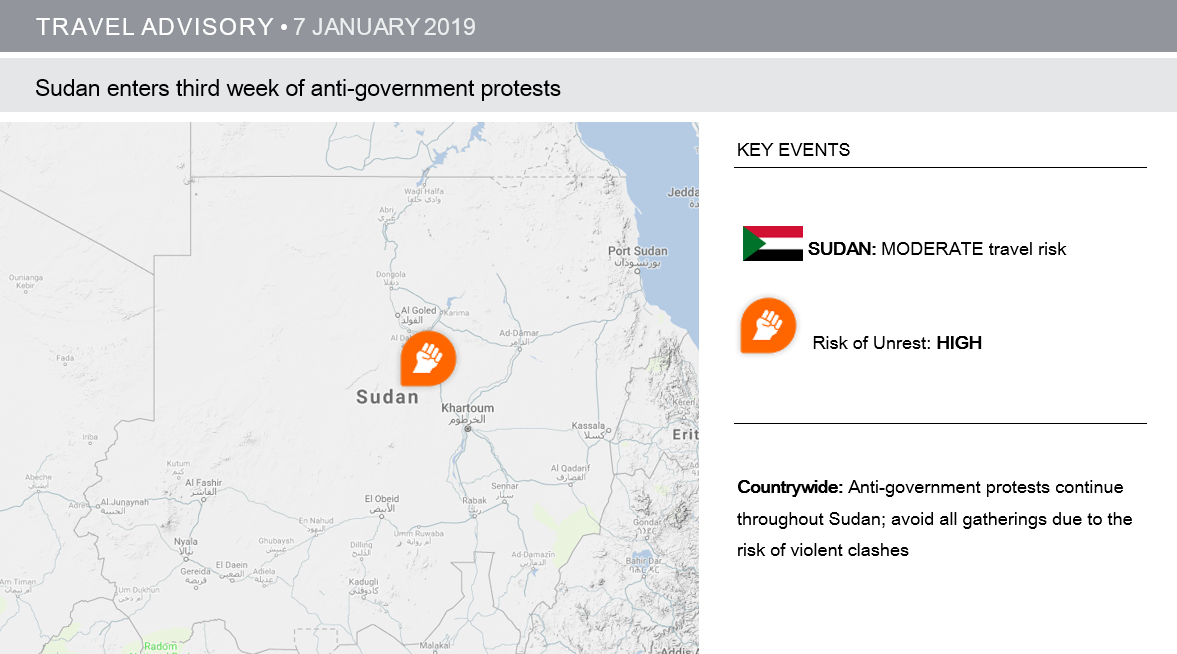 Widespread demonstrations broke out in numerous cities in Sudan on 19 December following weeks of commodity shortages caused by surging inflation. Protesters were initially demanding greater transparency from the government over measures being implemented to combat the economic crisis. Unrest started in Atbarar (West Nile State), where protesters set fire to buildings and offices of the ruling National Congress Party (NCP), unrest then quickly spread to other major cities in the country including Al-Qadarif, Kassala, Omdurman, Port Sudan and the capital Khartoum. On 21 December, the government deployed military personnel to the main flashpoints in an effort the quell the movement. Despite the forceful response from the Sudanese government, large groups have continued to protest on a near-daily basis and are now demanding that Omar Hassan al-Bashir resign as President.

In response to the unrest, local reports state that military and police personnel have used tear gas, stun grenades and live ammunition to disperse protesters. On 25 December, hundreds of protesters attempted march on the Presidential Palace in Khartoum; however, security forces employed live ammunition to disperse the crowds before they reached the palace. Curfews have been implemented in at least eight cities in response to the unrest and social media sites have been blocked by the government to try and disrupt the organisation of protest movements. Additionally, at least 850 people have been arrested since the protests began including opposition politicians, university staff, journalists, activists and doctors. Further protests are scheduled on 9 January in Khartoum and Omdurman.

Travellers in Sudan should take enhanced security precautions for the duration of their trip, minimising time spent near potential protest flashpoints including government buildings, central parks/squares and outside Mosques. Anticipate further telecommunication disruption and monitor developments over the coming days.

Food, fuel and cash shortages were the spark that led to a wave of unrest engulfing Sudan in recent weeks. Protesters are now calling for the resignation of long-term President Omar Al-Bashir. While commodity shortages have been the immediate cause of protests, the recent unrest and anti-government sentiment highlights deeply rooted challenges within Sudan and the potential for a further deterioration in the travel security environment in the coming months.

Sudan is no stranger to countrywide protests that have led to popular uprisings. Civil action has twice unseated authoritarian regimes in the country, once in 1964 and a second time in 1985. However, Omar Al-Bashir, who has ruled for 30 years, will likely prove resilient to any forced regime change.

Protests have periodically occurred in Sudan over the last 36 months following stringent International Monetary Fund (IMF) regulations coupled by Western sanctions and the drop in the price of oil, crippling the national economy. Last January rallies broke out in Khartoum and other urban centres when wheat subsidies were removed, doubling the price of bread overnight. The government overcame the demonstrations through aggressive policing, multiple arrests and the eventual guarantee that bread subsidies would be restored. However, they did not tackle to root cause of the protests.

What marks the last month of protests as different from other previous bouts of unrest is the coverage, audience and persistence. Protests in 2013, that were met with a forceful response by security forces and the death of over 200 demonstrators, were confined to Khartoum and did not spread to other cities, making it far easier for Al-Bashir to manage, employing a ruthless response and diminishing the desire of civilians to protest. This year’s protests are occurring in multiple towns and cities throughout the country, making it much more difficult for the Sudanese government to manage the situation through an aggressive determent policy. The protests also include a new demographic, the middle class. Hyper inflation has not only increased the price of basic commodities, it has also wiped out the value of savings of the Sudanese many who have high levels of education and work high-skilled jobs. Doctors, engineers, teachers and even civil servants have added both numbers and to the validity of the anti-government movement. Further, a coalition of 22 political parties have backed the movement and are also calling for the resignation of the President. Workers unions have come together to form the Sudanese Association of Professionals and are now coordinating the previously leaderless movement, arranging daily protests all over the country. Such factors have increased the resolve and determination of the protesters, uniting the movement.

Al-Bashir has responded by increasing the salaries of public sector workers and has announced that he will improve their health insurance and pension benefits. This has been done in the hope of excluding the middle-income element from the protests. The increasing campaign to arrest high profile civilians involved with the unrest has led to over 850 arrests including doctors, teachers, politicians, journalists and leaders of the workers union. While the arrests had hoped to deter the middle income, at present, it has only increased the resolve of those working to organise protests.

In both the 1964 and 1985 uprising the military intervened in support of the people-led movements, proving a crucial factor in both regime changes. The armed forces again remain the key player in the current unrest but remain on the side of the government. Learning from previous administrations Al-Bashir has installed a hugely influential National Intelligence Security Services (NISS) as well as numerous security actors and militias who are used in the capital Khartoum instead of the Sudanese Armed Forces. The complex network of powerful sub-actors loyal to the President, alongside the fear of some military commander of being held to account for war crimes if the current administration falls, will mean that army intervention against Al-Bashir remains increasingly unlikely.

In consideration of the current situation, it is likely that protests will continue for the short term before they start to burn out. This said, countrywide unrest is likely to become a more permanent fixture of the travel security environment as the socio-economic root causes that led to the wave of protests continue to be unmet. Further short-term measures to appease protesters are likely to be introduced in the coming weeks but none of these will deal with the wider issues at play.

Travellers should carefully consider whether travel to Khartoum is business critical at the current time and consider postponing their trip until protests end. For those in country, it is important to stay up to date with local developments and planned protests through the media, local contacts and Solace Global Alerts. If you find yourself in the vicinity of a protest immediately leave the area and return to a safe location