According to the latest intelligence, on 12 May, four ships were targeted, two Saudi vessels and two others, off the coast of Fujairah, United Arab Emirates. Speculation remains rife regarding who was behind the attack, with US Intelligence blaming Iranian backed proxies. Despite continued social media chatter stating that the attack happened in the port of Fujairah, it appears the vessels were targeted off the Emirati coast. Regardless, operations at the port of Fujairah continue to function normally and have suffered no interruptions. At this time, there is no clear evidence to suggest that Iran or any other actor was behind the incidents; however, Iranian backed proxies are believed to be the main suspect. There have also been no official claims of responsibility. 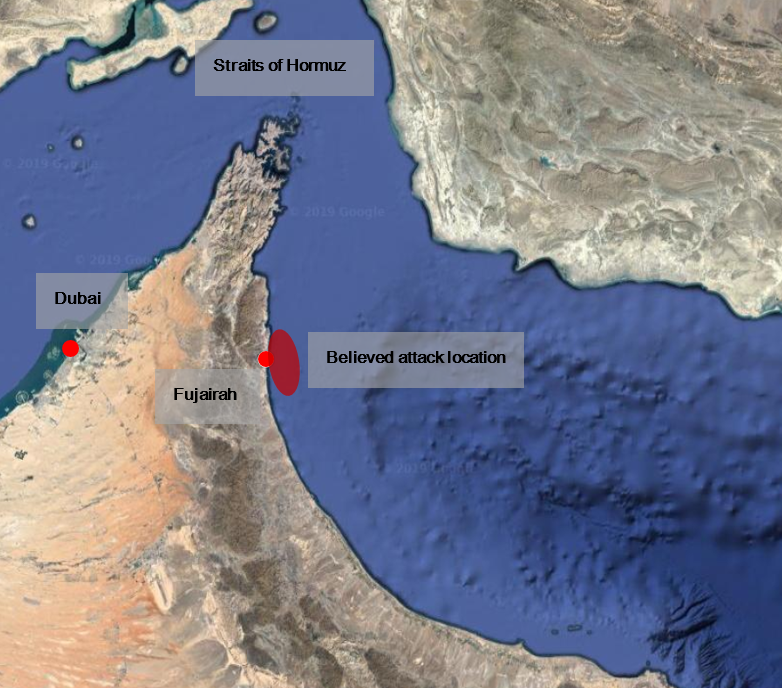 The precise nature of the incident still remains unclear at this time. There continues to be a large amount of misinformation on social media stating that an attack occurred in Fujairah port. Indeed, any attack on the port has been denied by the port authorities, and both locals and port workers that have been contacted by Solace Global have stated that it does not appear that any major attack occurred in the port.

Instead, at this time, it appears that four tankers were attacked off the coast of Fujairah. It appears that these vessels, all oil tankers, were subject to some sort of “sabotage” attack whilst anchored near Fujairah; and not in the port.

At the time of writing, there have been no reports of injuries or fatalities on board the vessels and one photo appears to show a light spill of some kind; however, the authenticity of the image could not be verified. The UAE foreign ministry has declared that all acts of sabotage on civilian vessels which threatens the safety of those on board “is a serious development”. Investigations into the incident remain ongoing and, at this time, no group or actor has been blamed for the attack and no suspects have been identified; likewise, no group has claimed the attacks. Though US officials are speculating that Iran-backed proxies have some responsibility in the attacks.

The Iranian Foreign Minister has stated that the incident was “alarming and regrettable”. A senior Iranian MP has also stated that the saboteurs appear from “a third country” and has urged a probe into the incident. The UAE Ministry of Energy has stressed the need for increased cooperation within the international community, who are responsible to ensure the safety and security of oil tankers in the region, due to the possible serious impacts on the world economy should navigation in the area be disrupted.

An important note in the incident is that the UAE was flooded with media reports linked to Russia and Iranian servers and social media accounts that claimed the attack occurred on land at Fujairah’s port. While it remains unclear if these fake reports were part of the attack, they included that “seven to ten tankers were in flames”. There were also claims of the US or other aircraft flying over the port at the time. These claims were immediately refuted by the UAE government and the Fujairah port authorities. The Iranian state-funded broadcaster Press TV used the incident as an opportunity to link the “attacks” with the ongoing war in Yemen. Regardless, the incident appears to show a concentrated effort to spread misinformation during and after the incidents.

The incident comes at a time of heightened tension in the region. The US has deployed a carrier battle group, B-52 strategic bombers and patriot defence missile systems to the Persian Gulf. The deployment by the US is understood to be in response to a possible threat to US forces in the region by Iran in response to the increasing tensions over the collapse of the Iran deal.

The deployment of the forces increases the risk of a “miscalculation” by military forces in the Gulf. It is feared that an incident between the two countries’ navies could result in an escalation in the region, including a possible military confrontation. It has also increased the rhetoric from both sides with Iran describing the deployment as a potential “target” and not a threat. Indeed, a former US defence official warned on 12 May that the threat of a miscalculation by either side was now a very “real risk”.

The Threat to Vessels in the Region

Attacks on oil tankers in the Gulf have been a rare occurrence since 1991. Saudi Arabia did not halt shipping through the Strait of Hormuz in the 1981-88 conflict between Iraq and Iran when both sides attacked vessels in the Gulf; in what was known as the “tanker war”. Additionally, oil exports continued during the first Gulf War in 1990-91. The risk to tankers in the Straits of Hormuz region remains LOW for the time being. However, additional incidents or attacks will alter the security environment greatly, likely leading to the deployment of additional maritime assets by numerous countries, which, in turn, raises the risk of an international incident.

The most notable recent incident was in 2010, when a Japanese tanker, the M. Star, was damaged in an explosive attack whilst docked around 14 miles (22 kilometres) off the coast of Fujairah, UAE. This attack was claimed by the Brigades of Abdullah Azzam, a militant jihadist group. More recently, in September 2018, the Saudi military reportedly foiled attacks by Houthi militants at Jizan’s port. According to reports, the military foiled an attack by two explosives-laden remote-controlled boats at the port. The attacks were reportedly in response to Saudi air raids in Yemen. Additionally, in July 2018 a UAE navy vessel was reportedly attacked off the coast of Yemen by Houthi rebels. The vessel is understood to have caught fire and was close to sinking following the attack. Finally, in 2016, Houthi rebels attempted to hit a US destroyer that was launching cruise missiles on rebel positions.

The nearby Straits of Hormuz is bordered by Iran, Oman and the UAE and is the single most important waterway for global oil shipments; making it an attractive target for sabotage or other forms of attack on oil shipments. However, due to the waterway’s strategic importance, it is also one of the most heavily patrolled regions in the world; with significant American naval assets already in the area, not to mention the deployment of a new carrier group.