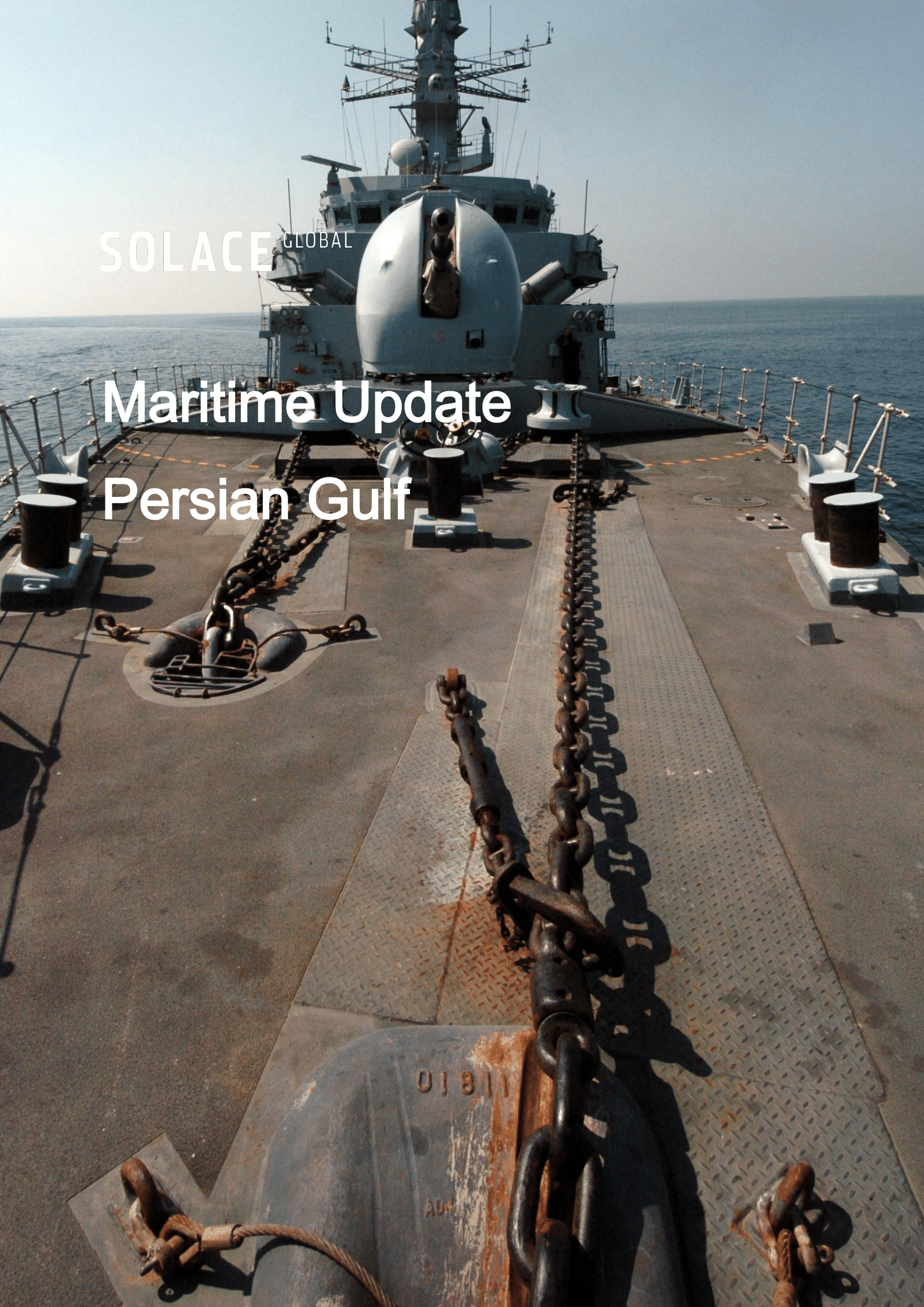 Tensions remain high in the Gulf, the seizure of Grace 1 near Gibraltar, the approaching of a British Tanker and the continued collapsing of the Iran Nuclear deal are heightening the risk for ships entering the region.

With the continued rhetoric between Iran and the United States, the attacks in May and June, the recent seizure of Grace 1 and the alleged targeting of the British tanker British Heritage, the threat to merchant vessels entering the Gulf is high. While it remains unclear who the perpetrator(s) of the two attacks in the Gulf of Oman are, the incidents, coupled with the recent rhetoric by Tehran threatening oil tankers in the Gulf, demonstrates the vulnerability that large merchant vessels are in whilst caught in the middle of the ongoing geopolitical standoff.

It is important to remember that despite the specific threat to British flagged vessels by Tehran since the Grace 1 seizure, multiple different flagged vessels have been targeted and, in the case of the Fujairah and Gulf of Oman incidents, attacked. Regardless of the flag that the ship is flying, the nationality of the vessel’s owner, or even who was behind previous incidents and attacks, there is a heightened risk whilst operating in the region and the risks are not going to deescalate in the near future.

As such, whilst it is highly unlikely that, given the number of vessels transiting the area, that a vessel will be attacked or even targeted, extreme caution is highly advised. This is why war risk underwriters are charging additional premiums for calls to the Arabian Gulf/Gulf of Oman, with some of the prices being quoted six times higher than before the incidents in May and June.

Why the further tensions increase?

The latest update and the further ramping up of tensions has been triggered by two key events. firstly, while European countries are continuing to attempt to save the Joint Comprehensive Plan of Action (JCPOA; or Iran Nuclear Deal). Tehran has been slowly breaking the terms of the treaty and, over the weekend of the 7-8 July, Iran broke the uranium enrichment limit set by the deal. Second, on 4 July, the tanker Grace 1, was detained by Gibraltarian police after being boarded by Royal Marines. The vessel was suspected of transporting oil to Syria in violation of the EU sanctions on Damascus. Tehran has since acknowledged its ties to the vessel but denied it was en route to Syria.

The detention of the Grace 1 resulted in an escalation of tensions between London and Tehran. With the latter stating that they would deliberately target British flagged vessels in the Persian Gulf. Advisor to Iranian supreme leader Ayatollah Khamanei tweeted (in Persian) “If Britain does not release the Iranian oil tanker, it is the authorities’ duty to seize a British oil tanker.” Iran also accused the British of acting to the orders of Washington in the seizure of the vessel.

Police have since arrested the captain, chief officer and two other officers of the Grace 1 and are understood to be interviewing them. It has been stressed that none of them has been charged at the time of writing.

The UK had been, and still is, one of the leading voices in trying to rescue the 2015 deal after U.S. President Donald Trump pulled out and Iran stepped up uranium enrichment in defiance of the extended sanctions. To read more regarding the Iran Nuclear Deal please read our recent report on the subject: https://www.solaceglobal.com/report/iran-deal-collapsing-comes-next/

As a result of the Grace 1 incident, and away from the Iran Nuclear Deal, a confrontation between a British warship and three Iranian vessels has created, yet another, incident in the Persian Gulf. This has added to the two previous attacks and the wider instability in the region. Creating an insecure trading environment, especially for British vessels, and resulting in the aforementioned increase in insurance premiums on vessels entering the Gulf.

The incident has, like many of the recent incidents and attacks in the region, garnered different narratives depending on whether Washington, London or Tehran are talking. According to the reports that are coming out via news sites and social media, a British flagged tanker, the British Heritage, was “confronted” by a number of Iranian military vessels whilst in the Persian Gulf. These vessels eventually left the vessel alone after being warned off by the Royal Navy Type-23 Duke class frigate, HMS Montrose. The frigate was escorting the tanker to avoid it being targeted in response to last week’s seizure by British special forces of Grace 1.

According to the reports, The HMS Montrose “was forced to position herself between the Iranian vessels and British Heritage and issue verbal warnings to the Iranian vessels, which then turned away.” It is also understood that the naval vessel deployed a wildcat helicopter which circled the Iranian boats. It is important to be aware that the Iranian Revolutionary Guards have denied trying to stop the vessel.

The UK Department for Transport has issued new guidance to all British-flagged commercial ships to go to a heightened state of security in the Strait of Hormuz. British-flagged ships have been advised to keep alert for Iranian patrol boats “being aggressive towards them”. 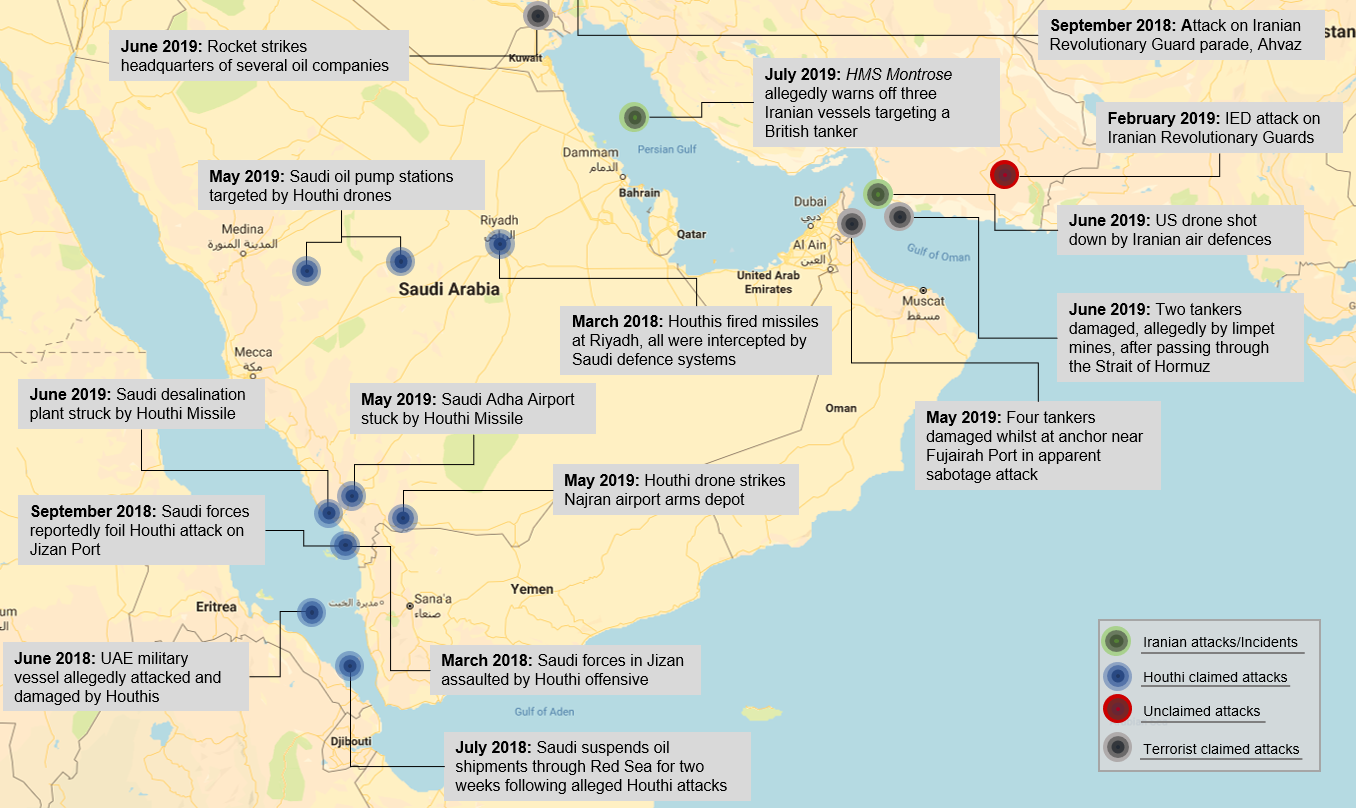 This incident is just the latest in a now growing list of events surrounding the strategic important gulf and on the Arabian Peninsula (see map above). Most notably, on 13 June, explosions occurred on two underway tankers in the Gulf of Oman; the Front Altair and the Kokuka Courageous. The attacks on the vessels were almost certainly carried out using some sort of limpet mines placed above the waterline on the side of both vessels; with photos depicting one unexploded mine on the side of one of the vessels. Investigations are continuing. The explosions on the Front Altair resulted in quite extensive damage from the resulting fire; however, the fire did not appear to result in any significant damage to the ship’s cargo or fuel load.

Video footage released by the United States depicts what they allege are Iranian Revolutionary Guards removing the unexploded limpet mine on the vessel. The US has stated that Iran was behind the attack, while Iran has blamed the US and stated that it was a false flag operation. The incident followed an attack in May, where four vessels were struck, this time below the waterline, whilst at anchor at Fujairah in the United Arab Emirates.

The attacks and the targeting of tankers by Iranian vessels has resulted in insurance rates to transit the Strait of Hormuz to increase substantially.

What remains unclear is what next steps major international powers will take. It is likely that there will be some sort of military deployment, especially from the Americans and the British. Indeed, Britain has already stated that HMS Duncan, a Type-45 Daring-class destroyer, will sail for the Gulf in the coming days. The vessel has recently finished NATO-related exercises in the Black Sea. The vessel will operate alongside the frigate, HMS Montrose, as well as American vessels deployed in the Gulf. However, at this time, it is not expected that the destroyer will be part of any maritime coalition.

Indeed, US General Mark Milley, nominated to become chairman of the US Joint Chiefs of Staff, has stated that Washington was working to put together a coalition that would provide a “military escort, naval escort” to commercial shipping in the Persian Gulf. However, the exact composition of this coalition remains unclear. According to Milley, the initiative would be developed over the next couple of weeks and will likely involve the US, Britain and a number of non-regional countries.

Both Britain and the US maintain a constant presence in the Persian Gulf. The Royal Navy’s HMS Montrose has been deployed to the region since 2018 and has been keeping in close contact with British vessels transiting the area since the Grace 1 seizure. However, until HMS Duncan arrives, the frigate is the only British warship capable of conducting escorting duties in the area. There is the HMS Brocklesby, a British minesweeper, currently in Bahraini waters; however, the ship carries out a very different role and would be ill-suited to escorting tankers.

The American navy, on the other hand, has the USS Abraham Lincoln and Carrier Strike Group 12 in the region. The fleet was deployed at the beginning of the rise in tensions between America and Iran and consists of the Nimitz-class carrier, at least five destroyers, the USS Leyte Gulf, a Ticonderoga-class cruiser. Several American warships are also understood to be operating inside the Persian Gulf and in the wider area; including a Wasp-class amphibious assault ship.

In addition to this, there are a few other navies deployed carrying out exercises off the coast of India as well as the ongoing anti-piracy deployments off the coast of Arabia and Somalia, which could have ships diverted from.

As such, it is expected that some sort of escorting practice will be set up. In the short term, British warships will likely escort British tankers and freight vessels through the Gulf. Indeed, it appears that HMS Montrose is already completing this task on an ad-hoc basis. HMS Duncan is likely to start supporting the frigate when it arrives. In the medium to long term, a coalition including International (US, French and other European) and local (Saudi and UAE) vessels will begin a type of escorting practice. The longer term will largely depend on how relations develop between Tehran and Washington and the rest of the world.

Currently, it is hard to envision the closure of the strait or a restriction to shipping in the region. However, should further incidents occur, if a country makes a miscalculation in the region or if a shot is fired, even by accident, we may see the risk in the region spiral even further. As such, those operating in the Gulf should ensure they employ caution, limit the time they spend in the region, and strictly adhere to all instructions issued by military forces, regardless of their nationality.