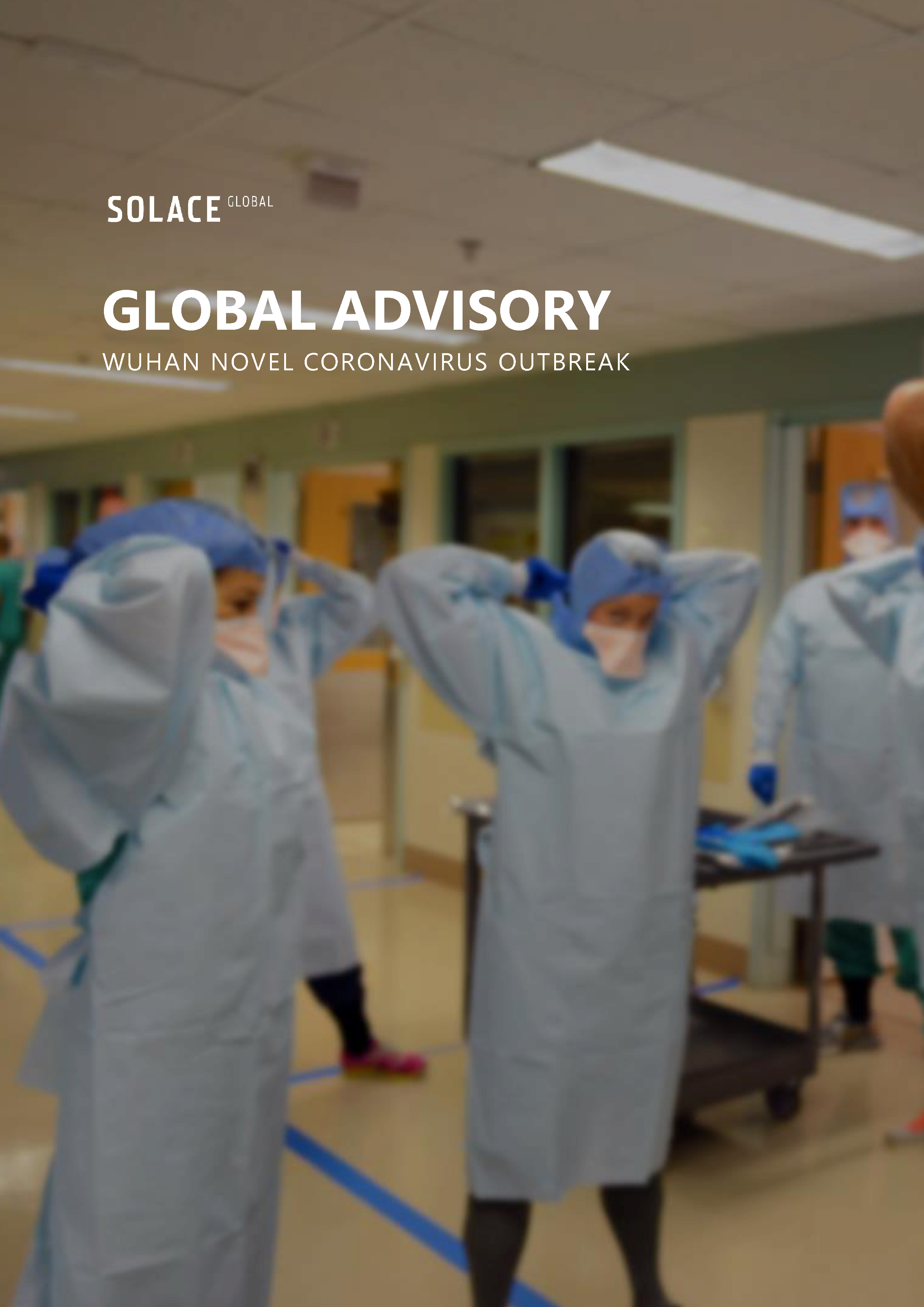 Concerns are growing as almost 500 confirmed cases of the Wuhan novel coronavirus (2019-nCoV) have been registered globally. Countries, airlines and airports across the world are working to limit the spread of the virus, which has also claimed 17 lives.

Please note that we are currently releasing updated Coronavirus reports on our Linkedin Page. To receive daily Coronavirus Reports as well as other free intelligence reports email ‘subscribe’ to risk@solaceglobal.com from your company email address.

At the time of writing, there have been almost 500 confirmed cases of novel coronavirus, which has been denoted as 2019-nCoV by the World Health Organisation but is also known as Wuhan coronavirus, due to its initial identification in the city of Wuhan, China. As of 22 January, 17 deaths have occurred, all in mainland China, with evidence of human-to-human transmission. Many of the almost 500 cases being reported are healthcare workers, who were likely in direct contact with the virus. Confirmed cases have also been reported in Thailand, South Korea, Japan, Taiwan, Macau, Hong Kong and the United States.

A similar outbreak of the SARS virus (SARS-CoV) in 2002 resulted in more than 8,000 infections and 800 fatalities. Similarly, MERS, first identified in 2013 in Saudi Arabia resulted in about 850 deaths worldwide according to the WHO.

Coronaviruses (CoV) are a large family of viruses mainly associated with the common cold and flu. Many strains circulate in animals and do not infect humans. Initial information indicated a number of similar pneumonia cases were being reported in Wuhan, the Chinese authorities reported that a coronavirus as a possible pathogen causing this cluster. Laboratory tests quickly ruled out SARS-CoV, MERS-CoV, influenza, avian influenza, adenovirus, and other common infectious agents.

Initial observations around the virus have compared it to SARS. However, experts have been quick to point out that the virus does not, at this time, look to be nearly as infectious as SARS. At this stage, it does not appear that the virus transmits through the air easily.

The first case of the virus was reported on 31 December 2019, with initial symptoms appearing just over three weeks earlier, on 8 December. The first death from the virus occurred on 9 January. The Chinese authorities have been quick to begin research into a specific diagnostic and screening for the virus. As a result of these screenings, it is believed that the Wuhan coronavirus originated from the Huanan Seafood market in the city.

How the Virus Spreads

Investigations are ongoing regarding the exact source of the virus and for clarity in how it spreads.

It is currently believed that the virus is transmitted from animals to humans, with the initial cluster of cases occurring at the seafood and animal market in Wuhan. However, with further cases being reported in recent days and weeks, it is now believed that human-to-human transmission is likely. Authorities in China have reported that the virus has been transmitted between people including healthcare workers.

The Wuhan coronavirus appears to be spread in a similar fashion to that of the cold or flu, through coughing, sneezing and even talking. However, research has argued that the virus cannot transmit through the air easily instead, close contact and the sharing of bodily fluids is a likely possibility.

It is important to stress that the situation is currently developing at a fast rate, no government warnings against travel have been issued to China. However, several governmental authorities have advised against all but essential travel to Wuhan city, including the Chinese Health Authorities. At this time, only eight cases have been reported outside of China. Some large-scale corporations and business have also advised their employees against travel to China. Those who have the confirmed virus are reported to have had a history of travel to Wuhan. Across mainland China, there are just over 440 cases, with 270 of these being reported in Hubei Province (of which Wuhan is the capital).

Chinese authorities are advising against travel back to Wuhan for Chinese New Year with celebrations cancelled in the city. The recent surge in virus cases has put the city on high alert, resulting in shopping centres, streets and transport hubs being empty. Those who do venture outside don face masks and only leave their homes to collect the essentials. Wuhan has also banned all food markets selling live animals as a reaction to the outbreak.

The World Health Organization hosted an emergency meeting in Geneva on 22 January to decide on whether to declare an international emergency regarding the outbreak. Fears are high due to the Wuhan coronavirus belonging to the same family as the SARS virus of 2002-2003. This has resulted in countries in the region taking pre-emptive precautions, South Korea’s T’Way Air has postponed the launch of flights to and from Korea. Additionally, North Korea has temporarily suspended foreign tourism and Hong Kong has initiated a public health plan.

Many airports globally have already begun screening travellers at arrivals. In Europe, the UK has begun “enhanced monitoring” of the three direct flights from Wuhan to London, with a separate arrival area for these flights and additional screening and support. Public Health England has also upgraded the risk from the virus from “very low” to “low”. With case numbers rising it is likely that these additional measures will be issued to many other countries, including across Europe and especially to countries with direct flights from China.

Whilst the rapid spread of the Wuhan virus has sparked worldwide concern over the emergence of a SARS-like epidemic, it is important to stress that both the severity and contagion speed of the current outbreak remains limited at this time. The warnings and enhanced security measures implemented by governments and transport authorities are intended primarily to increase awareness and monitor the situation. The official WHO statement expected imminently is likely to clarify the gravity of the situation. The organisation, alongside the Chinese authorities, have identified more than 2,000 close contacts, of which 1,394 are currently under observation.

Efforts by China to stop the virus spreading are being hampered however by Chinese New Year. The national holiday is accompanied by the Chunyan period, which is currently in full swing, usually starting 15 days prior to Chinese New Year (25 January this year) and sees almost three billion passenger journeys. China’s railways and roads are currently experiencing their busiest time of the year. While less affected, air travel also increases both inside and out of the country.

The outbreak of the virus has forced many people to reconsider plans to travel to their hometowns. Those actually from Wuhan have officially been asked to cancel their plans to travel back to the region. Others have avoided travelling by land through Wuhan or Hubei, instead opting for longer routes around the province. Those still travelling home, or who are already in the city, are being urged to work from their homes or extend their stay by at least two weeks, before returning.

If you are concerned about your health and/or show signs of symptoms you should:

Fill in your details below to subscribe to our free intelligence reports mailing list. Reports for the Coronavirus outbreak are currently being produced and distributed daily, 7 days a week with the aim of keeping businesses and travellers up to date with the global situation. You can unsubscribe at any time.