A merchant vessel was attacked by a skiff at 00°49’N, 050°53’E on 16 October 2018. Shots were fired at the merchant vessel, to which the onboard armed security team returned fire resulting in the skiff moving away, out of visual range. The vessel’s master has confirmed that the vessel is safe. Vessels transiting the area are advised to exercise extreme caution. 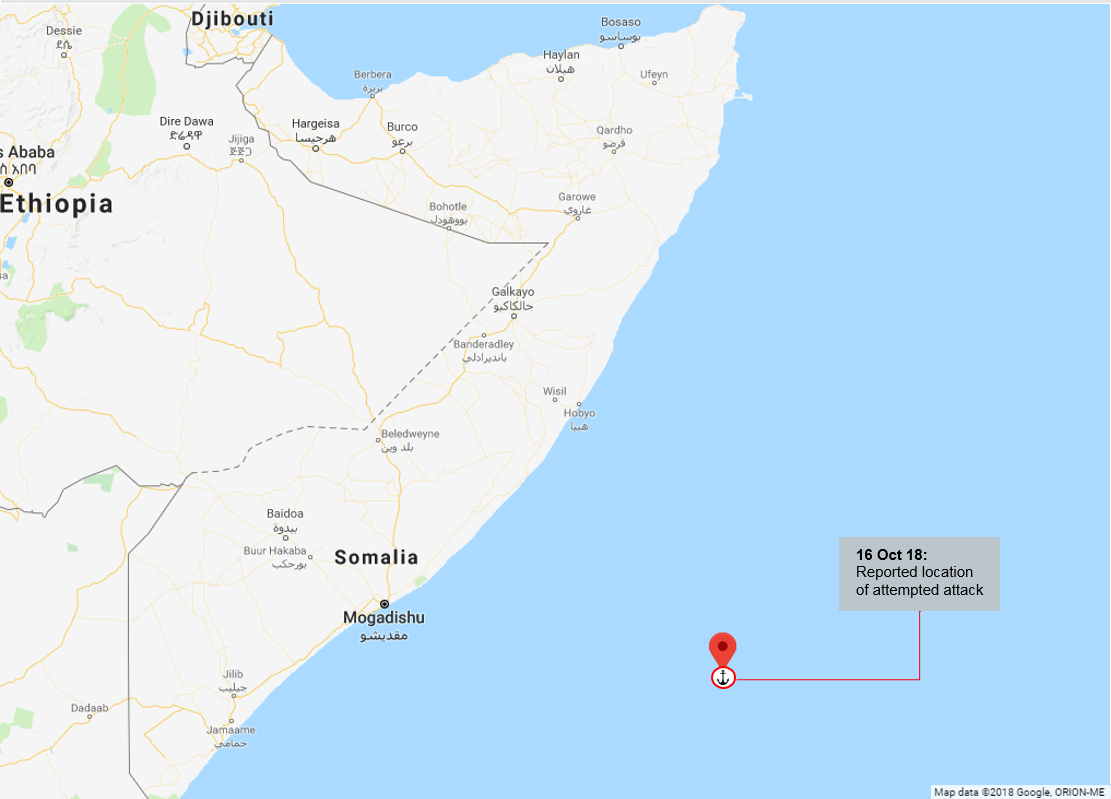 Maritime: A merchant vessel was attacked off the coast of Somalia at 1234 UTC on 16 October. The attack occurred at 00°49’N, 050°53’E. A single skiff with four occupants reportedly fired on the vessel with automatic rifles. The ship’s onboard armed security team (AST) then returned fire. Following which, the skiff aborted the attack and moved out of visual range. The master confirmed that the vessel and all its crew are safe. Further details including the condition of the crew and the ships name and owner have not been confirmed.

Considering the proximity of the attack to Somalia, it is almost certain that the skiff was operating out of Somalia. However, the attack occurred around 520km (280 nautical miles) from the Somali coast; therefore, it is unlikely that the skiff was operating without a supporting vessel or mother ship. As such, there is a risk of additional attacks in the area and any vessels transiting the area are advised to exercise caution.

Though attacks in the region have diminished greatly since the height of piracy in the region in 2009; this attack constitutes the first significant attack on a vessel in the area since the MT Leopard Sun was fired upon by two skiffs 300km (160 nautical miles) off the coast of Somali in February. The majority of attacks and suspicious approaches now focus on the Gulf of Aden and the Bab El Mandeb Strait; due to the ongoing conflict in Yemen and attacks by Houthi rebels. This incident demonstrates the continued threat that pirates operating out of Somalia pose to vessels in the Indian Ocean High Risk Area (HRA). The adherence to BMP5 measures, in addition to the presence of the ASTs, prevented the pirates from boarding the vessels, allowing both vessels to continue on their onward journeys with little disruption.

Vessels transiting the Indian Ocean HRA should maintain a heightened level of surveillance. Vessels passing in proximity to the reported attack location are advised to proceed with extreme caution. The location of the recent piracy attacks in the southern Somali basin occurs with less frequency than the frequent suspicious approaches reported in the Gulf of Aden and the Bab El Mandeb Strait. However, the recent attack highlights the continued necessity of BMP5 measures for vessels transiting the region. A thorough risk assessment is advised prior to each voyage through the HRA with vessels ensuring that all BMP5 measures are in place; such as the use of hardening vessel measures and embarked armed security.