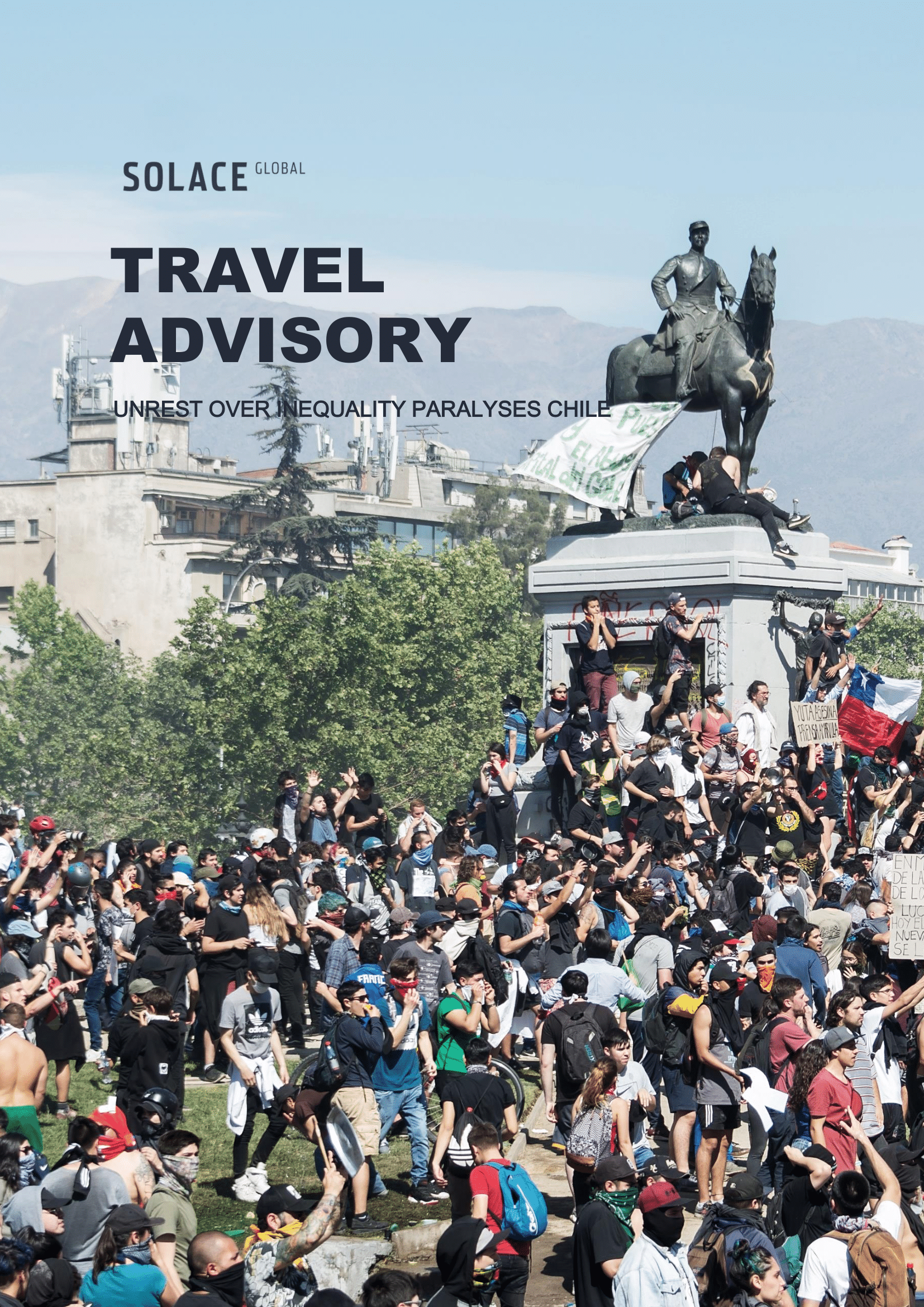 Chile has seen a series of violent protests in recent days that have resulted in a deterioration of the security environment. The military and police have used tear gas against protesters in an effort to disperse the demonstrations. Additionally, while curfews have been imposed in major cities the unrest continues. At least 18 people have died in the unrest thus far.

Chile has seen a series of violent protests in recent days that have resulted in a deterioration of the security environment. The military and police have used tear gas against protesters in an effort to disperse the demonstrations. Additionally, while curfews have been imposed in major cities the unrest continues. At least 18 people have died in the unrest thus far.

While the unrest started with only small protests against the rise in public transportation fares, which has since been rescinded, these small protests quickly grew into large scale demonstrations by the end of last week. They also turned violent, with riots and clashes between police and protesters occurring frequently.

President Sebastian Pinera, who was only elected last year, has responded by deploying more than 10,000 troops in the largest operation since the dictatorship of Augusto Pinochet more than three decades ago. A state of emergency has also been put in place in multiple locations since 18 October and is expected to last at least 15 days.

Demonstrators have targeted public transportation in the unrest, with approximately 16 buses and eight metro stations being torched, causing services to shutdown throughout the capital. Additionally, at least 90 flights were cancelled at Santiago International Airport over the weekend, where more than 5,000 people were forced to sleep at the airport on Saturday night. Power outages have also been reported, with more than 20,000 homes in Santiago being affected on Sunday. The unrest has reportedly cost the country “much more” than 200 million USD.

Ahead of the unrest on Monday, Pinera said the country was “at war” with a violent enemy. The remark resulted in an immediate backlash amongst the population with even his own head of national security, Gen Javier Iturriaga, playing down the comment.

On Tuesday evening, 22 October, President Pinera broadcasted a televised address, taking responsibility for the failure to recognise and address the deep societal divisions and growing inequality, and promising the introduction of a new welfare package to appease the demonstrators.

Much of the unrest has occurred in the capital Santiago; however, other cities have also been affected, chief among which are the cities of Valparaiso and Concepcion. While more peaceful but large protests have occurred at the coastal cities of Talcahuano, La Serena and Puerto Montt, among others.

Please download the report for a map of the protest locations

Drivers Behind the Unrest

Chile almost stands out amongst its regional neighbours, as the country tops South America across virtually all tables: per capita GDP, the U.N. Human Development Index, and multiple freedom rankings. Steady expansion over the past two decades has given the country one of the biggest middle classes and one of the lowest rates of poverty in the region. This has largely helped paper over the cracks of high inequality that has remained in the country despite these positives.

The initial trigger for the unrest was a 4 percent increase in metro fares that sparked small student demonstrations a week ago. However, the underlying driver behind its escalation into an almost nation-wide wave of unrest is the extreme social inequality in the country; half of Chile’s workers earn $550 per month or less, according to the national statistics institute, making public transportation a significant expenditure for many who live and work in the capital.

In addition to this, expensive private education and health care, the rising cost of public service and shrinking pensions have all fuelled the unrest. Indeed, in June, the price of electricity rose by 10 percent. This caused the protests to quickly morph into anti-government demonstrations, with protesters calling President Pinera, a Harvard-educated millionaire, out of touch with the people.

Monday evening, 21 October, was relatively more peaceful than previous days. There were only reports of minor isolated incidents following a military lockdown that began at 20:00 local time. However, the protests are continuing, and reports of violence are being reported nightly.

As such, it remains to be seen if the unrest does calm or if f violent protests persist do occur in the coming days. The protests had continued despite the rescinding of the metro price increase. As a result, these protests have now morphed into a more anti-government movement over the inequality on the country; these tensions are unlikely to dissipate in the coming days or weeks, regardless of the measures that the president and his government implements.

Indeed, while the majority of the protesters are young university students, Chileans of all ages, workers and professionals, have joined. Vitally, opposition politicians have also taken part. As such, it is possible that protesters may now focus on weekend rallies, in order to balance work and studying with prolonged activism. This is especially true given the marginal nature of many people’s incomes.

The country’s middle class have especially swung behind the protests, which is likely to fuel the continued tensions. While the Pinera government has been focusing on poverty as well as a number of policies that have helped the richest in society, the middle class have felt abandoned with a slowing economy and rising expenditures.

Protests are a rare occurrence in Chile; however, past instances have seen episodes of violence. In 2010, protests over educations saw injuries and widespread arrests with various levels of protests lasting until 2013. The government at the time, also functioning under President Pinera, combated the unrest with a series of reforms.