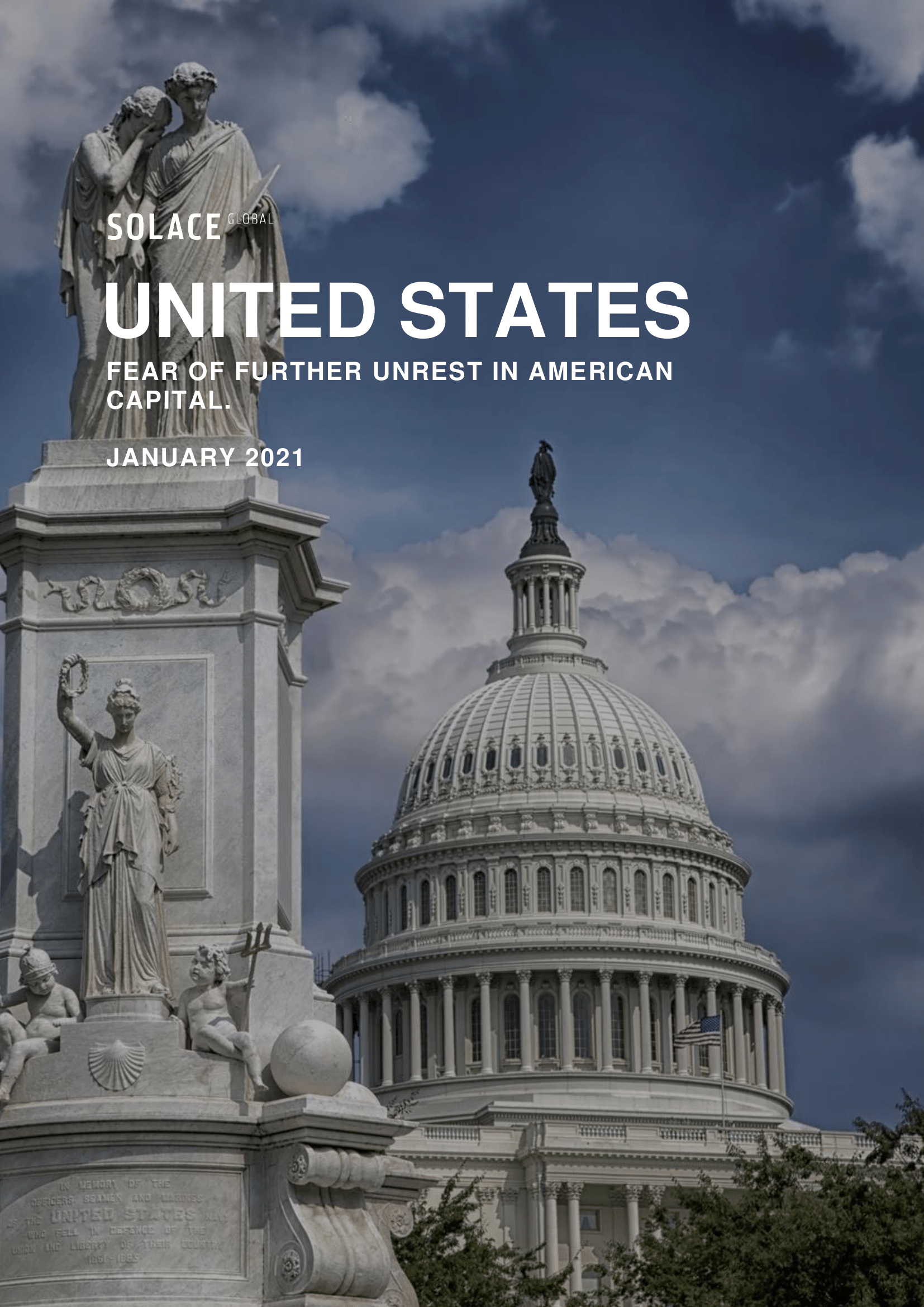 On 6 January, there was widespread shock as protesters, angry over President Trump’s defeat in the 2020 US election, stormed the Capitol building while both houses of Congress were in session.

On 6 January, there was widespread shock as protesters, angry over President Trump’s defeat in the 2020 US election, stormed the Capitol building while both houses of Congress were in session. The incident was extraordinary and resulted in President Trump acknowledging that events had gone too far, conceding for the first time. The president then issued a State of Emergency and the National Guard have been deployed. The FBI has warned of potential further unrest and violence across the city and the country in the build-up to, and during, Inauguration Day on 20 January.

Those in country should expect a heavy security presence in the country over the next few days, especially in Washington DC. While incidents on the inauguration are unlikely given the heavy security presence, they cannot be ruled out. As such, employ caution and avoid non-essential travel on Inauguration Day due to the possibility of unrest as well as the potential for violence.

On 6 January 2021, the US Capitol was stormed by a mob intent on disrupting the democratic process that was underway inside. As a result of the unrest, five people have been confirmed as dead, including a woman who was shot on camera while trying to climb through a window inside the Capitol building. Such scenes are not unusual in young or fragile democracies throughout the globe, but they are unprecedented in the United States. This has led to alarm amongst Americans and globally.

The episode started with President Trump addressing those out in support of the president’s efforts to overturn the election which he, and his supporters, believe was fraudulent, despite an apparent lack of evidence. In his address to the crowd, he called on those present to march on the Capitol, and that he would accompany them. About 30 minutes later, members of the crowd were reported to have marched down Pennsylvania Avenue and overwhelmed police stationed at the perimeter. At a little after 13:00 local time, as news about Vice President Pence’s refusal to overturn the election filtered through the crowd, individuals broke into the building resulting in an evacuation and a shelter in place order being issued to members of Congress. After a number of hours, rioters accessed numerous offices and the Senate chambers. It was not until 17:50 local time that the Congress building was declared “secure”. The House reconvened to certify Biden’s election victory at 20:00 local time.

Among those in the crowd were supporters of the baseless conspiracy theory by QAnon. Indeed, many of those who ended up entering the Capitol building were identified as well-known supporters of QAnon, including Jake Angeli, who entered the building dressed as a shaman, his images were widely circulated on social media.

In addition to the conspiracy theorists, among those who stormed the Capitol were members of the far-right group Proud Boys. The organisation, which was founded in 2016 with anti-immigrant beliefs and consists of only males, is a strong supporter of the outgoing president. There were also a number of more moderate Trump supporters reported to have entered the building, including influencer Tim Gionet AKA “Baked Alaska” who live-streamed the event to followers on social media. Right-wing groups have also alleged that the left-wing group Antifa was also involved, though there remains little evidence of this. There were also photos of an individual carrying a Confederate flag.

Two improvised explosive devices were also found in proximity to the Capitol. Both devices were of a similar design and are believed to have been planted (next to the Republican National Committee offices and Democratic National Committee headquarters) before the riot. The FBI is currently searching for the suspect they believe planted the device. The FBI has also stated that it has begun and expects to make hundreds of arrests on the charges of sedition and conspiracy towards those who took part in the unrest.

Numerous reports have been published describing the events and the chaos of the incident. According to some, those storming the building came within 100 meters of Vice President Pence, while there were also reports of demonstrators calling for his hanging. The potential exposure of the sitting vice president demonstrates how quickly the situation escalated as Capitol Police lost control of the situation.

Washington DC and the Capitol were taken by surprise on 6 January, with many not imagining that the incident was possible. However, the authorities have since implemented a State of Emergency, which authorises federal assistance to DC police and officials. As a result, the FBI and National Guard have been deployed to the city for the inauguration. The FBI has also warned of plans for armed protests at all 50 state capitals and in Washington DC in the days leading up to President-elect Joe Biden’s inauguration. As a result, there has been an increase in security across the country. Thus far, this has seen police and other security mostly outnumber protesters.

This increased security will be especially visible on Inauguration Day. All access to the event has been limited, partially due to the security concerns, but also due to the already in-place COVID-19 restrictions. Law enforcement officials have stated that there is a credible threat to the lives of the president-elect and vice president-elect. As such, the event is now heavily fortified with Washington DC becoming a practical fortress with over 25,000 National Guard soldiers deployed.

These measures, which have never been seen before, already appear justified, however, after a man was arrested at a DC checkpoint with fake inauguration credentials, a firearm and a number of magazines of ammunition. The FBI has also stated that it fears an “inside attack” and is currently pushing to vet the deployed National Guard soldiers. Despite this fear, however, officials have stated there is no intelligence supporting a potential insider attack.

Away from the capital, protests have already taken place in a number of US states, with most being marshalled by deployed National Guard troops. There was also an incident in South Carolina, where the Charleston County Democratic Party headquarters was vandalized over the weekend. Despite this, many of the protests across the country have been small, with media and law enforcement officers outnumbering those protesting. This does not mean that further unrest can be ruled out but has given observers hope that there will be no further unrest or violence during the inauguration on Wednesday, 20 January.

For those in the United States in the coming days: