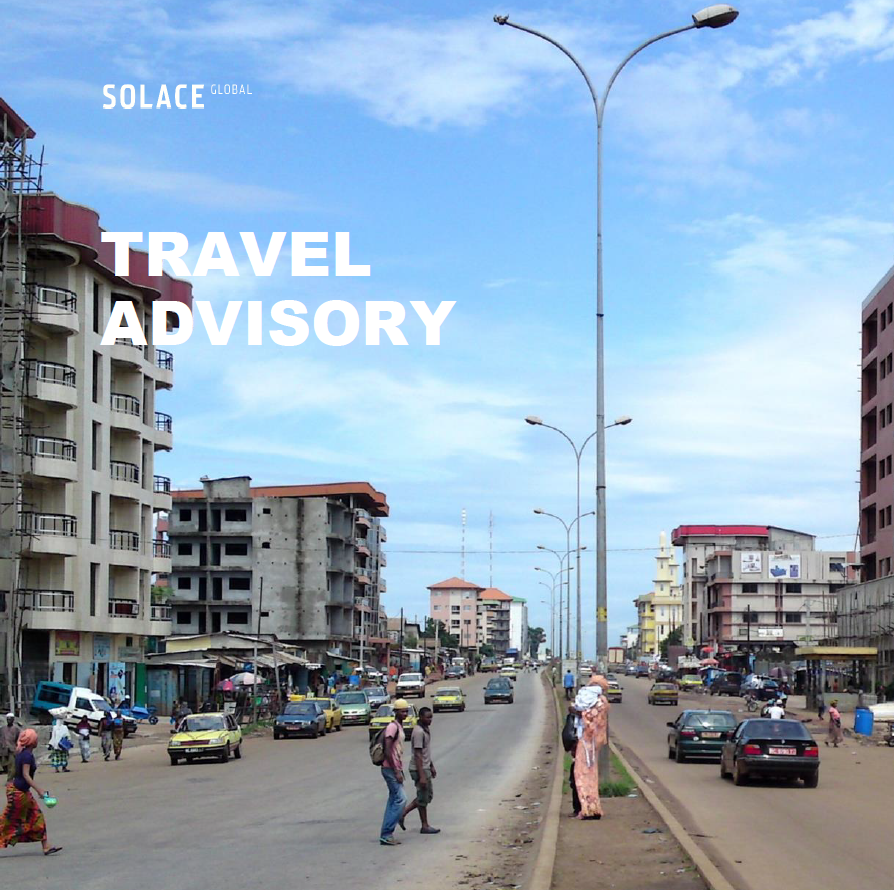 Periods of unrest continue to impact on the security environment in Guinea following the local elections in February 2018. The most recent demonstrations in the capital, Conakry, on 16 October led to clashes between protesters and security forces. One protester was killed following the security forces use of live ammunition, further aggravating the situation. Protests often target key business interests in the country including the export of aluminium ore bauxite; leaving boats stranded waiting to be loaded in the country.

Civil Unrest: Following accusations of electoral fraud during the Guinea February elections, opposition groups have launched a series of protests nationwide, targeting the government and leading to widespread clashes between security forces and demonstrations. On 15 and 16 October, hundreds of protesters participated in the ‘dead city protest’ in Conakry which led to the death of one protester after security forces fired live ammunition in an attempt to disperse crowds. In response to the incident opposition groups have organised a further planned march along the N1 Fidel Castro Highway to the Stade du 28 Septembre on 23 October to protest aggressive tactics by security forces towards political opposition groups and political rallies.

The protest is likely to cause disruption to the N1 which is the main route from Conakry city to Conakry International Airport. A funeral march is also taking place on 19 October in the Bambeto neighbourhood for the protester who died. Further demonstrations are likely in the coming weeks and there is a high likelihood of further clashes between protesters and the security forces. Travellers should avoid all planned protests due to the risk posed by violence and liaise with local contact regarding the feasibility of routes.

Civil unrest remains a persistent threat to all travellers in the West African country, often causing significant travel disruption in major urban centres. In 2008, military unrest occurred when the army demanded an increase in wages. This was followed by protests in 2009 against the military junta that had come to power in a coup at the end of 2008. In 2013, there were protests after allegations of vote rigging in parliamentary elections surfaced. More recently, in 2018, about 10 people were killed in February and March when riots erupted in the capital Conakry and other cities following local elections, again following allegations of fraud. Then in July strikes and protests erupted again; this time due to rising fuel prices. The most recent protests in October have occurred in reaction to the government’s failure to implement reforms that were laid out in an agreement in 2015 as well as the simmering tensions from the February 2018 election.

Opposition supporters often erect barricades during protests in the capital Conakry and the mining towns of Boke and Kamsar. In March, these demonstrations managed to disrupt some shipments of aluminium ore bauxite. Other protests see “Villes Morte” (dead cities) protests where shops stay closed while buses and shared taxis in the capital did not work, with some blocking a number of main routes. In the majority of cases, violence results from unrest; with security forces often employing heavy-handed tactics. In all cases, significant disruption to both road travel and to mineral shipments occur; impacting on business travel and on business interests.

For the past 10 months, protest action has occurred on a regular basis with spikes of violence occurring regularly. Civil society groups blame President Conde and his Rally of the Guinean People (RPG) party for failing to address the country’s poor economic performance. Demonstrations are also regularly sparked in protest to corruption, the high cost of living and public health issues. The current spat impacting the country continues a period unrest every few months since the February elections. In February/March and July, protests resulted in unrest and violence. This accompanied violence is often the result of police forcefully dispersing the demonstrations. In March, two protesters were shot and killed following a period of unrest. In the majority of cases, police will respond to unrest with tear gas and while firing live rounds is less common; it does occur.

Additionally, Conakry has been especially affected by unrest since February as, with the vote-rigging allegations aside, while President Conde’s RPG party dominated the vote nationwide; the party performed badly in the city and lost control of the municipal government of Conakry. Popularity for the ruling party is therefore low in the capital; further fuelling unrest and discontent.

The unrest also presents an acute risk for mining companies operating in the country. Protesters have targeted the producers of country’s largest export product, aluminium ore bauxite as part of anti-government unrest. Disruption to both mines and to major roads has seen boats left stranded waiting to be loaded; resulting in financial losses for companies. The western town of Boke, and the nearby port city of Kamsar, which are the centre of the country’s mining operations, have been the epicentre of much of the recent violence and protests. After Conakry, the majority of protests occur in these cities. While much of the country’s income is generated in the area, much of the country’s poor and unemployed are also housed in the area.

As a result of this, strike action in May resulted in bauxite production being completely stopped for more than 10 days resulting in a loss of between 1 and 1.2 million tonnes of scheduled production. Many of, unemployed and poor lay the blame at the door of the government and the mining companies; especially when these firms ship around 45 million metric tons of bauxite ore each year to overseas buyers and little of that income trickles down to the shanty towns near the mines. Often there is also a lack of local employment at the mines as well as recurring electrical outages that protesters believe is related to the power being deliberately cut in favour of mining operations.

It is likely that unrest of a similar scale will continue in the coming months. However, in the more medium to long-term, the decision by President Conde on whether to stand for a third term, which is not permissible under the Guinea constitution, will determine whether the unrest significantly escalates. Additionally, the country is vulnerable to wider political and economic developments in both the region and international. For example, a hike in oil prices may force the Guinea government to raise fuel prices again; resulting in further strikes and protests – leading to violence.

Despite the high civil unrest risk, travel to Guinea can continue as long as adequate precautions are in place: