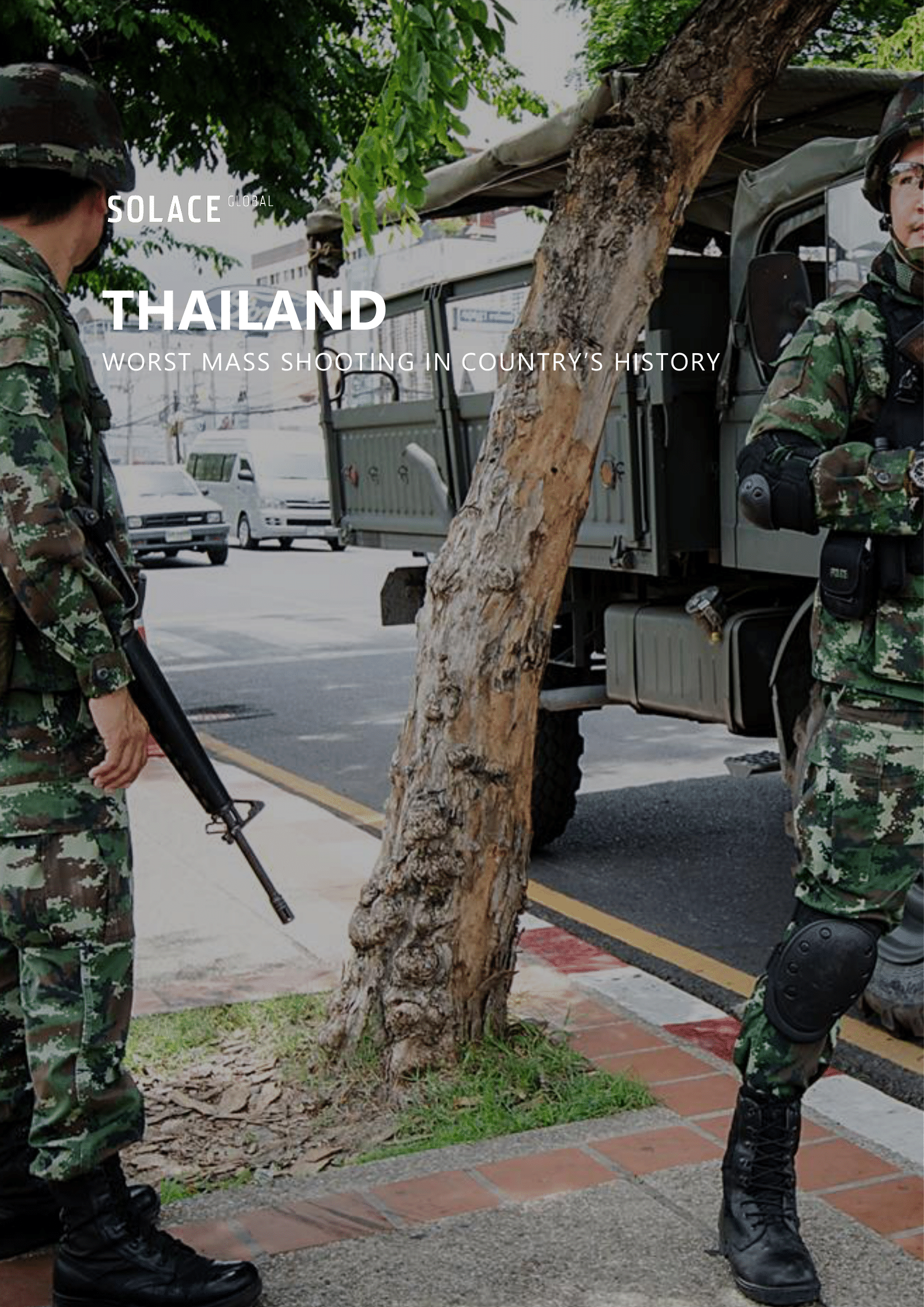 At approximately 15:30 local time on 8 February, a Thai soldier opened fire at a number of different locations in Nakhon Ratchasima. In total, 30 people were killed, including the attacker, and at least 50 others were injured.

At approximately 15:30 local time on 8 February, a Thai soldier opened fire at a number of different locations in Nakhon Ratchasima, also known as Korat. The attack is understood to have begun at the Suratham Phithak military camp, where the assailant, angry over a financial dispute, killed two people and stole firearms and ammunition before fleeing the scene in a military vehicle. He then continued the attack in the town centre. In total, 30 people were killed, including the attacker, and at least 50 others were injured.

At the time of writing, the incident has not been classed as a terrorist attack by the Thai government or the security forces, with the Army Chief General describing the shooter as a “criminal”. The financial dispute is understood to have involved the former soldier’s commanding officer, shedding light upon an underlying issue that faces Thailand’s powerful military.

According to Thai officials, the attack commenced with Sgt. Maj. Jakrapanth Thomma fatally shooting his commanding officer, Col. Anantarote Krasae, at his residence. Jakrapanth then headed to his army camp, where he reportedly took a number of firearms, including an HK33 assault rifle, and ammunition while also wounding several soldiers. He then stole a vehicle and escaped, injuring several other soldiers and two police officers.

Jakrapanth then began a shooting spree, documented by videos posted on social media that showed the gunman exiting the vehicle and discharging his weapon. Eyewitnesses stated that Jakrapanth was shooting with accuracy and aiming for the head or chest with each shot. The event took time to target those who stopped to help the injured, with a motorcyclist being shot on camera while stopping to help a person lying on the ground.

Jakrapanth Thomma was based at the Suatham Phithak military camp base, located some 250 kilometres from Bangkok. He was a Sergeant Major in the 22nd Ammunition Battalion. He was a sharpshooter and had taken various special courses on attacking and ambushing. The exact motives for the spree remain unclear. There have been reports that the culprit was involved in a dispute with his commanding officer over a property. According to media reports, those who knew Jakrapanth have spoken about a deep-seated grudge against his superior officer.

At approximately 18:00 local time, he entered the Terminal 21 shopping centre and took an unknown number of people hostage on the fourth floor of the building. The Royal Thai Police, together with the deployed military units, evacuated the scene and established a 2-kilometre-wide cordon closing multiple roads in the area.

Overnight, Jakrapanth escaped to the mall’s basement as soldiers surrounded the mall. The standoff lasted the whole night, with multiple bursts of gunfire reported while the security forces hunted for the shooter. At 09:30 local time on Sunday 9 February, Thai Special Forces cleared the mall and rescued a number of hostages before killing the attacker. Shortly after, army officials released the death toll of 30 dead, including the assailant, and 58 injured.

Nakhon Ratchasima’s shooting has been described as the deadliest in Thailand’s modern history. Outside of Thailand’s restive south, violent incidents of this nature are sporadic and rare. The majority of such attacks occur in the capital, Bangkok, the most recent high-profile attack being a bombing that occurred during the 2019 ASEAN summit in Bangkok, which resulted in seven injuries and was later linked to the southern insurgency. In addition to the capital, attacks targeting tourist destinations and resorts, such as the most recent small-scale bombing in Phuket and the 2016 Hua Hin bombing, which killed one person and injured 23, do also occur sporadically.

While the nature of these attacks remains varied and fundamentally unpredictable, they generally target government buildings, military outposts, as well as tourist destinations and public transport hubs, often resulting in only in a few injuries and occasional fatalities. Even though the violence in the country as a whole has not been as deadly as in the south, there are some concerns that resorts could be increasingly targeted by separatists in the future due to their higher profile and potential visibility from such attacks.

In Thailand’s three southernmost provinces, Pattani, Narathiwat and Yala, have been fighting a violent separatist insurgency for decades and, as a result, the region sees the vast majority of the country’s attacks. The deadliest episode in recent years took place on 5 November 2019, when at least 15 people were gunned down at a security checkpoint in Yala province.

The central government, as well as the Thai security forces and the wider Buddhist population, have been the main targets of the insurgency. However, 60 percent of the casualties in the conflict have been the local Muslim population, with the vast majority killed at the hands of the insurgents. It is believed that over 7,000 people have been killed since the resurgence of the militant campaign in 2004, with more than 15,000 “insurgency-related” incidents in the conflict between the nationalist and militant groups. Most of the attacks involved improvised explosive devices (IEDs) and grenades, though shootings and arson attacks are also frequent. Many of these attacks go unreported or unnoticed outside of Thailand, though foreign governments do advise against all but essential travel to the region.

While the shooting has been largely treated as a criminal, rather than terrorist, act, it has also highlighted some of the underlying issues within the Thai military establishment, including common practices by officers and its security protocols.

Jakrapanth had risen through the ranks in the army, having achieved sergeant major first-class, the highest possible for a non-commissioned officer. He had also managed to easily take a number of firearms, including an HK33 assault rifle, an M60 machine gun and ample ammunition that allowed him to perpetrate the deadly shooting spree. Thailand’s Prime Minister, former General Prayuth Chan-o-cha, was forced to publicly defend the security at the military base following the shooting.

The Army Chief, General Apirat Kongsompong, confirmed that the mass shooting was initially triggered by a disagreement over a business dealing with a superior officer, whose company handled house purchases and loans for soldiers. The General also admitted that the incident reflected a problem of inadequate support and the poor treatment of soldiers by their commanding officers and launched a formal investigation. The superior officer, a colonel, was amongst the first to be killed by Jakrapanth, together with his mother-in-law and a property agent. While the officer’s family has denied any sort of business with Jakrapanth, the practice is rife in Thailand.

It is relatively common for commanding officers to operate businesses outside of the military. It is also common for officers to conduct business dealings with their subordinates; however, any disputes that arise normally favour officers, leaving soldiers with little say. Friends of Jakrapanth have stated that the sergeant major was expecting to receive some 13,000USD from the colonel.

The Thai military is one of the country’s most powerful institutions. A military coup d’état conducted in 2014 installed the current Prime Minister, Former General Prayuth Chan-o-cha. Moreover, in 2017, the military won a vote that gives it a dominant role in the country’s government. As such, joining the military is, for many, a means to power and wealth, especially if serving as a commissioned officer.

The tragedy sheds a light upon these practices and the subsequent potential problems that can arise within Thailand’s military establishment. Though it is unlikely to weaken its hold on governance and decision making, the Army Chief has pledged to take action and investigate the possible involvement of other senior members of the military.

It is unlikely that officers will want to see their lucrative side businesses taken away. Any potential reform, in a country that has seen more military coup d’états and attempted coups in modern history than any other country, presents potential problems for the government and army officials. Thai military generals and officers are not afraid to challenge the government, or each other, to maintain their leading role in politics. However, a failure to tackle such issues could present a problem for the Thai military going forward, with a clear gap between officers and rank-and-file soldiers, further disputes, low morale and, especially in Thailand’s case, a coup, all possible.