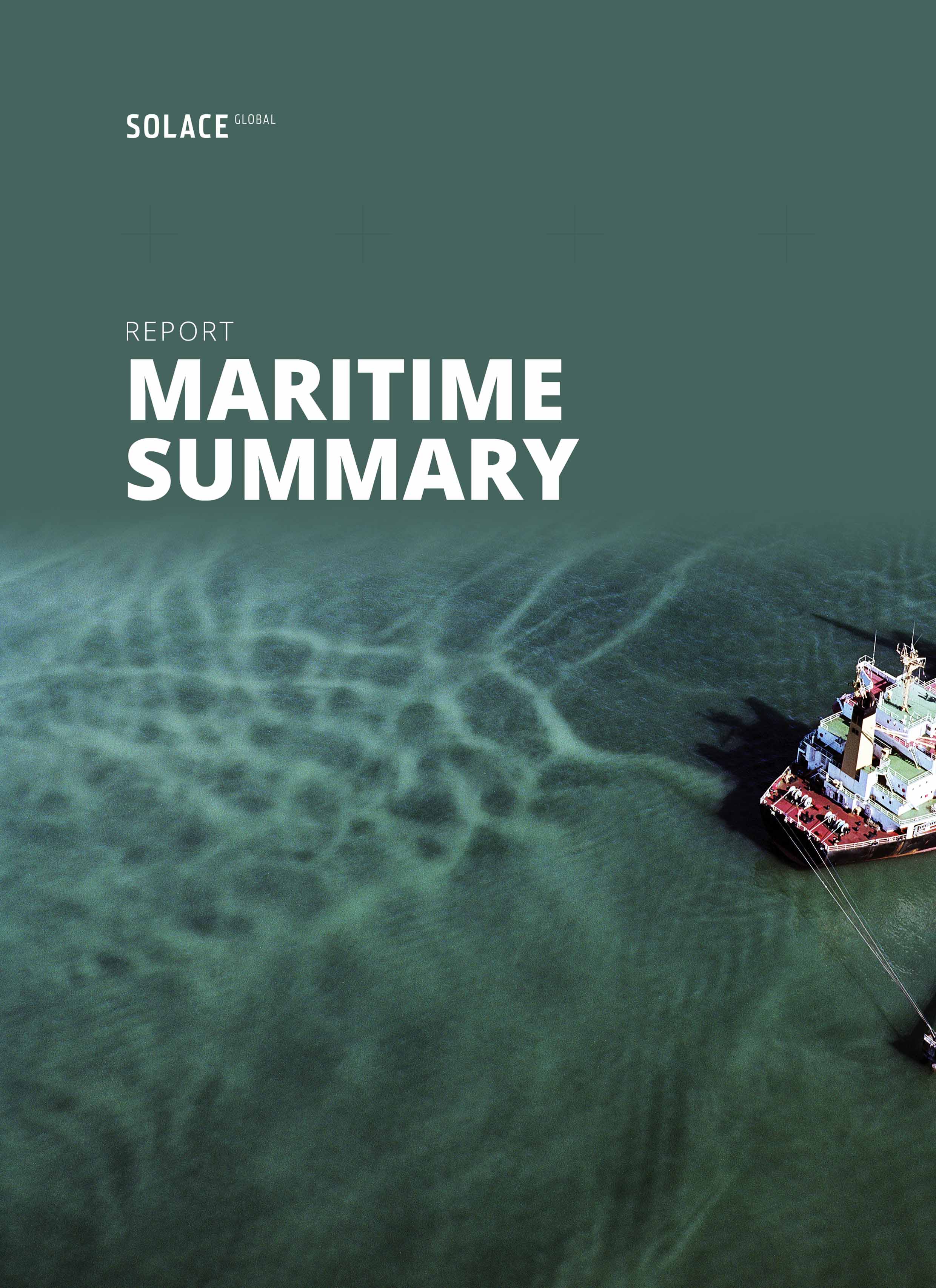 Solace Global Maritime Security compile a monthly report, summarising maritime incidents in areas of high risk piracy and other security threats.
The report is researched and collated by the Solace Global in-house intelligence team. The report covering the month of May looks at the following three areas: 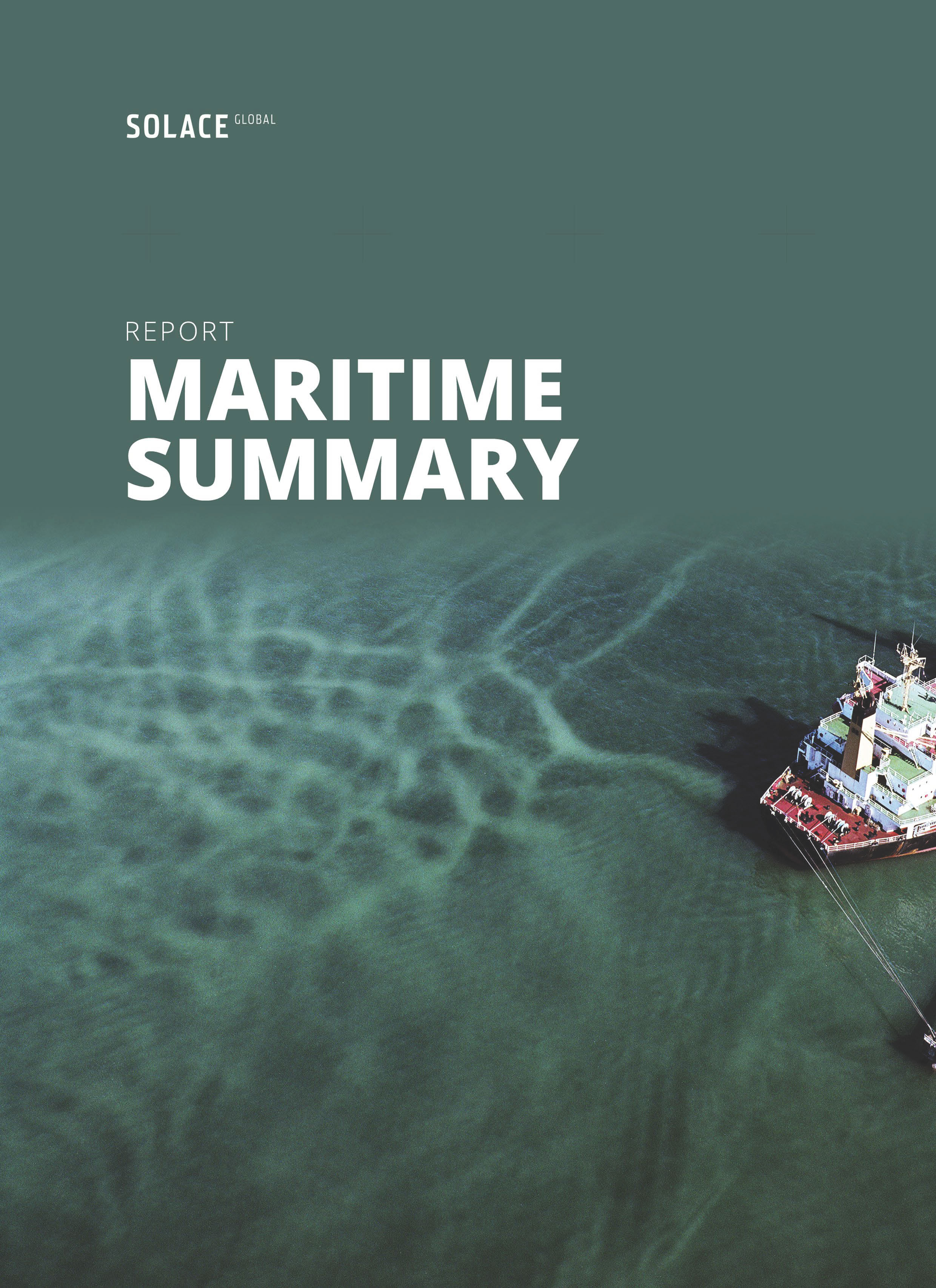 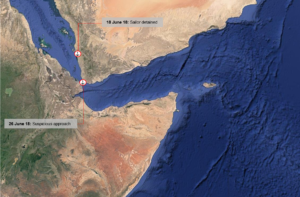 27-29 June 18 Joint India-Bangladesh Naval Exercises. India and Bangladesh conducted their first joint naval exercise in the Bay of Bengal. The aim of the exercises were to enhance cooperation and interoperability against maritime crime and militancy in the region.

June 2018 saw relatively little activity toward merchant shipping within the Indian Ocean High Risk Area, with the main point to note being a triple suspicious approach by two speedboats in the Bab-el-Mandeb on 23 June. In this case, no attack followed, and the vessels continued their voyage safely.

The International Maritime Bureau released a statement indicating that the impeding monsoon season may drive pirate attacks in the more sheltered waters of the Gulf of Aden and Red Sea. Storm conditions are likely to force IUU fishermen from elsewhere into this region, and the increase in competition may lead to an increase in ad-hoc piracy. Whilst no significant attacks to demonstrate this have yet occurred, the prospect of attacks remain highly likely. Mariners should also remain aware that groups of IUU fishermen often contain a similar configuration of vessels as pirate groups, carry weapons, and may manoeuvre aggressively in an effort to protect their nets.

The Yemen civil war has, again, had notable spill over into the maritime domain, in this case related to offensive operations to retake Al Hudaydah from the Houthi group. Offensive operations did not begin smoothly, as the Houthi reportedly sunk at least one Saudi-coalition landing craft on approach to the port, and tenuous humanitarian ceasefire has since been imposed. The UN and other non-governmental organisations heavily involved in seeking to stave off the worsening famine via food shipments into the port. Fighting is likely to resume in early July unless a negotiated settlement can be reached; the UN has offered to take control of the port as a neutral party in order to effectively guarantee the supply of aid to all parties, regardless of the conflict.

Additionally, the change in the threat picture, driven by the war in Yemen, has been a contributing factor resulting in the issue of BMP5. This is a revised series of anti-piracy and maritime security best management practices intended to replace BMP4 and provide advice and mitigation against the wider spectrum of threats as demonstrated by the conflict. 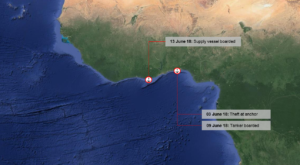 09 June 18 Tanker Boarded in Lagos. At least one robber was reported to have boarded a tanker in position 6°27’00N, 003°22’18E. A hose was inserted into a cargo tank. After being seen, the robber escaped the vessel and into a nearby speedboat.

12 June 18 Naval Operations in Delta. The Nigerian naval officer in command of forces in the Delta region reported that amphibious operations to clear out illegal oil refineries in the region would push ahead. Operations in the preceding month have been deemed successful, despite widespread reports of pollution from destroyed facilities.

18 June 18 Militant Groups Threaten to Attack Oil Facilities in Niger Delta. Niger Delta Activists Forum have warned of planned attacks on oil facilities belonging to Agip. These threats were made in response to the group’s claim that previous agreements have not been implemented, as well as pollution of the area.

Activity in the Gulf of Guinea has remained within broader trends, with a significant focus on Nigerian waters, and one boarding in Takoradi, Ghana. Reports of an attempt to steal cargo from a tanker in Lagos indicates a potential return to form for blackmarket oil theives, following a period where attacks seemed to shift focus from preying on cargo, to targetting the crews. Taken more broadly, these continued efforts to steal and then resell oil demonstrate the relatively limited impact of the Nigerian governments operations against illegal oil infrastructure in the region. If these experienced siginificant success, it would be expected that the lack of storage infrastructure would remove the incentive for groups to target the cargo.

Additionally, activist-militant groups in the Niger Delta have threatened attacks against oil producers, particularly the company Agip. Their primary issues appear to remain consistent with previous demands, i.e. seeking a better standard of life for the local populations of oil-producing areas, and staunch opposition to the pollution caused by oil extraction. Agreements between activists and oil firms had previously been agreed, however Agip are alleged to have failed to uphold the deal, provoking this statement of intent.

The vessel boarded in Takoradi appears to fit within the wider trend of opportunistic efforts to steal stores or crew’s possessions from anchored vessels throughout the region. It is likely that significantly more attacks of this nature occur than are reported due to the relatively low value of stolen goods compared to the cost of vessel delays. It remains imperative that a robust watch is maintained at all times when alongside or at anchor. 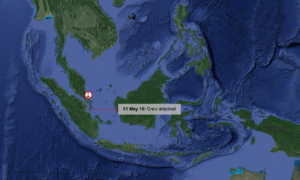 27-29 June 18 Joint India-Bangladesh Naval Exercises. India and Bangladesh conducted their first joint naval exercise in the Bay of Bengal. The aim of the exercises were to enhance cooperation and interoperability against maritime crime and militancy in the region.

No attacks or robberies against vessels have been reported through the month of June, however the period did see a series of late reports relating to events throughout May, the most significant being an attack on a tanker by up to 14 men armed with bladed weapons on 31 May. This attack, at 02°25’N, 104°25’E near Mersing, resulted in the robbers injuring two crew members, before escaping with ship’s stores. Malaysian naval forces then intercepted and detained the group. This attack occurred in an area north of other boarding incidents this year, but south of two reported hijackings during 2017. Whilst it not possible to confirm whether these incidents are the result of the same group, and therefore has been mitigated following their detentions, taken together they demonstrate a continuation of the trend of more violent or serious attacks to the north-east of the hotspots in the Malacca and Singapore straits.

The series of maritime security conferences throughout Asia during June highlights the continuation of perceived threats by regional governments. The ReCAAP conference is particularly of note, an increased effort toward proactive intelligence collection and a focus on encouraging crime-reporting by Chinese vessels appears to underscore the chronic issue of under-reporting in the region. Masters should remain aware that crimes against seafarers remain frequent, and measures should be taken to safeguard the vessel and crew, particularly when transiting natural choke-points or at anchor.