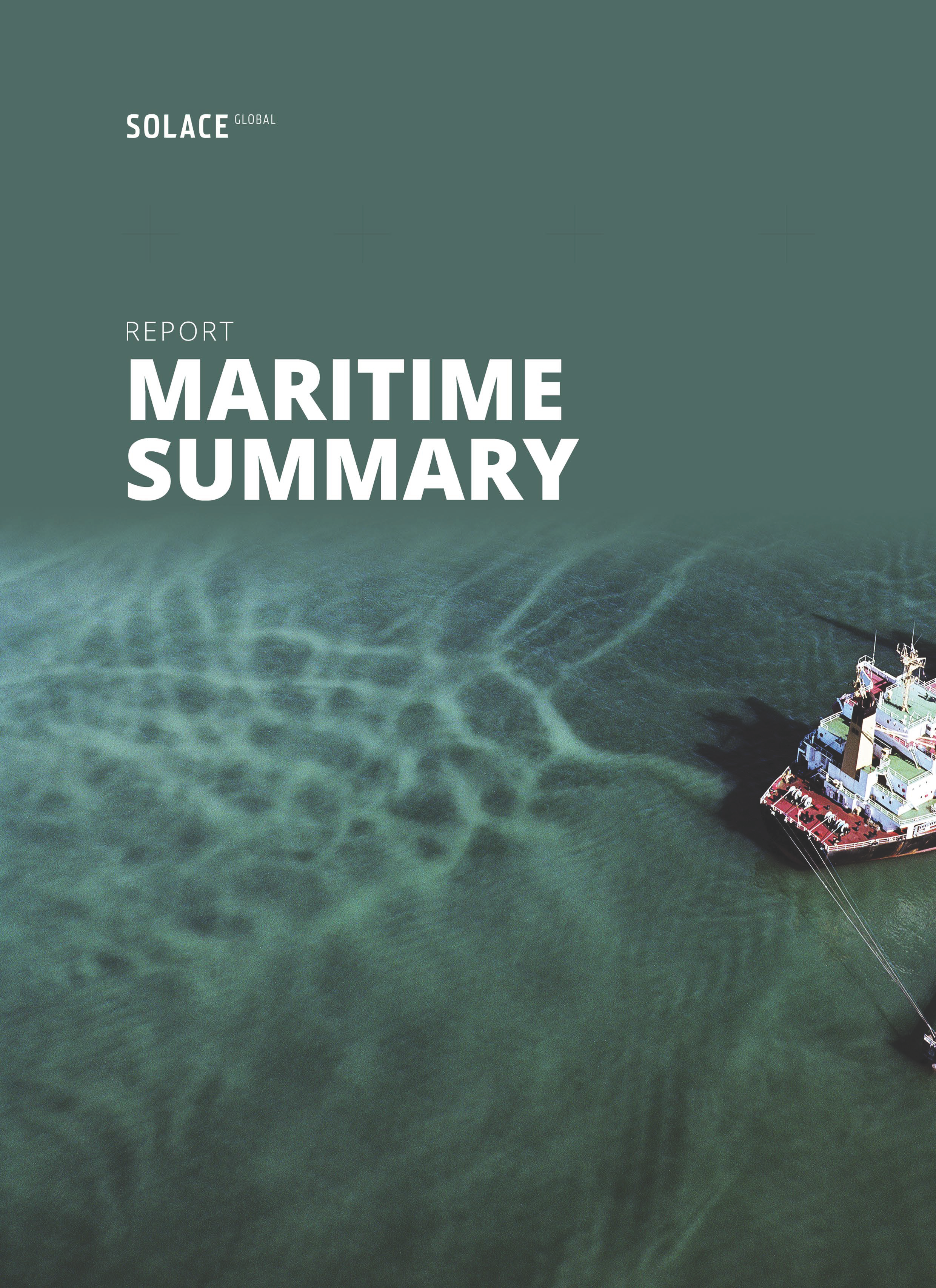 Solace Global Maritime Security compile a monthly report, summarising maritime incidents in areas of high risk piracy and other security threats.
The report is researched and collated by the Solace Global in-house intelligence team. The report covering the month of August looks at the following three areas: 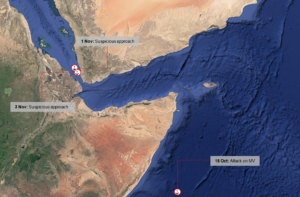 There have been several notable incidents in the past month in the Indian Ocean. On 16 October, a vessel was attacked off the coast of Somalia, east of Mogadishu. Onboard Armed Security Team (AST)  returned fire, resulting in the assailants aborting their attack. The incident was the first in the area since February. Further to the north, there were two suspicious approaches in the Bab el Mandeb Strait. In the first instance the crew came within 1 cable, under 200 metres, and in the second instance, onboard ASTs fired flares to ward off the approach.

Following the attack on 16 October, EU NAVFOR commander Rear Adm. Alfonso Perez de Nanclares ordered additional units to the area for an investigation. Spanish maritime reconnaissance aircraft flew over the area to gain as much information on suspected pirate activity as they could. Their patrols found that pirate launches were still active in the area and could be used to launch further attacks on shipping vessels. A suspicious boat identified by the patrol aircraft was later tracked down by the crew of the Spanish Galicia-class LPD ESPS Castilla to a small bay just off the Somali coast. Rear Adm. Perez ordered it to be seized, towed out to sea and destroyed.

To the east, on 10 October, in an LGP Tanker was boarded while at anchor at Deendayal Anchorage near Gujarat, India. The robbers stole ship stores before escaping. Then to the south, on 29 October, at the Nacala Outer Anchorage in Mozambique, a robber tried to board a tanker via its anchor chain. Nothing was reported stolen.

Additionally, between 6 October and 15 October, Cyclone Luban Impacted the north-western Indian Ocean into the Gulf of Aden. The storm passed north-east of Socotra and made landfall in south-east Yemen and southern Oman. The strong winds and high seas impacted maritime shipping in the region.

On 9 October, the Pakistan Navy left the Anti-Piracy Combined Task Force. The decision to leave was made after the US-led operation refused to pay for fuel for the patrolling warships as part of a previous agreement. Participating in the task force is voluntary. By distancing themselves, Pakistan will be able to conduct independent patrols from the Gulf of Oman to the Gulf of Aden. Pakistan’s warming relations with Iran’s military, combined with security agreements with China, may be a growing cause of concern for the United States and her allies in the region.

Numerous media sources reported on 22 October that the British Type 45 Destroyer HMS Dragon was approached by three Iranian Fast Attack Craft from the port side whilst travelling through the Strait of Hormuz. The Iranian vessels threatened to get between the destroyer and the trio of British vessels that were being escorted by the warship through the strait. It is understood that HMS Dragon gave five warning blasts from the ship’s horn. The Iranian vessels eventually moved aside without further confrontation. Additionally, during a visit to Oman by British defence secretary, it was announced that Britain would open a joint military base in Duqm.

The conflict in Yemen is continuing and Saudi, Emirate and Yemeni forces continue to pressure the Houthi city and port of Hodeidah. Coalition Forces Intercept Missile Fired Towards Aden, Yemen. Local media reported the target of the attack was believed to be the coalition’s headquarters in the district of Buraigh in Aden. No casualties were reported. Coalition Forces Intercept Rigged Speedboats Targeting Jazan Port, Saudi Arabia. Local media have reported two rigged speedboats were destroyed by naval coalition forces. Houthi militias are attributed with the attempted attack. Houthis also reportedly seized fuel and food cargo that was entering Hodeidah. Regional media reported Houthi forces have prevented ships from unloading cargo, such as fuel and food supplies. Some ships have been held in port for up to 6 months. Aid agencies have called for the UN to push for the release of the cargo and vessels.

There have been several incidents in the Gulf of Guinea over the past month. Including attacks on vessels underway and the boarding of ships at anchor. On 28 October, 11 crewmembers were also seized from a vessel near Onne in the Delta region of Nigeria. The vessel, Pomerenia Sky, managed to escape with the remaining nine crew members onboard. The incident follows a similar kidnapping nearby off Bonny Island, Nigeria in September.

The International Chamber of Commerce (ICC) have reported that the number of hijackings is at a record low in the Gulf of Guinea; however, the statistics also show that the risk in the region persists. Indeed, statistics show an increasing number of incidents compared with last year; in the first nine months of the year, there have been 156 incidents of piracy compared with 121 for the same period of 2017. Amongst the statistics, there are 13 cases of vessels being fired upon and 32 attempted attacks; as well as, 107 vessels reportedly being boarded and four hijackings earlier in the year.

The boarding of vessels at anchor fit within the wider trend of opportunistic efforts to steal stores or crew’s possessions from vessels throughout the region. It is highly unlikely that this trend will reverse in the short-term. Additionally, many more incidents of this nature, or attempts, occur than are reported; due to the relatively low value of stolen goods compared to the cost of vessel delays. In most cases, the thieves efforts appear to be directed mostly at crew possessions and man-portable ship’s stores, rather than targeting the vessels’ cargo.

Notable robberies have occurred in Sekondi Port, Ghana, which was only discovered after crew reviewed CCTV. Additionally, a robbery was thwarted at Takoradi Anchorage, also in Ghana. In Ponte Noire, the Republic of Congo, armed robbers stole roping; the assailants escaped when the alarm was raised. Possibly the same assailants were involved in an almost identical incident on a different vessel at the same port two days later. A similar incident occurred in Lagos with two robbers escaping after the alarm was raised by the ships watchkeeper. 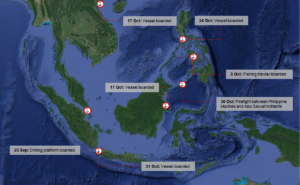 Like in September, through October and in the first week of November, the primary threat to commercial traffic in South East Asia remained theft from vessels. Ships at anchor continued to be boarded throughout the region. In most cases, the assailants relied on stealth to close in on vessels, then board and steal goods (normally ship stores or cargo) before departing without alerting the crew. One of the notable incidents this month occurred in Campha Anchorage, Vietnam, when a bulk carrier was boarded and had its stores stolen. A bulk carrier was also boarded whilst anchored at Muara Berau Anchorage, Samarinda; the robbers were reportedly armed with bladed weapons and escaped with some of the ship’s stores when the alarm was raised. An offshore drilling rig was also robbed at the end of September; the on-duty security guards were tied up during the incident.

Armed robbers also reportedly boarded a fishing vessel West of Negroes Island in the Philippines. The assailants stole the fishing catch and valuables before escaping. The local authorities were notified following the incident and the Coast Guard has warned all fishing boats in the area to be cautious. Also in the Philippines, a number of robbers on a bamboo boat approached a berthed LPG tanker whilst cargo operations were ongoing. One of the robbers managed to board the ship but was quickly spotted and the alarm raised.

Elsewhere, there have been reports by Regional Cooperation Agreement on Combating Piracy and Armed Robbery (ReCAAP) that the Abu Sayyaf Group is preparing to launch another round of pirate attacks in the waters off Sabah, Malaysia. The Philippine Coast Guard believes that about ten Abu Sayyaf members are planning to conduct kidnappings in and around Eastern Sabah. It is believed that the militants will target business people or crew aboard foreign vessels passing through the area. The intelligence released by the ReCAAP stated that the suspects are using unmarked, blue and white motorised “jungkong” launches of local (Malay) design. It is believed that the militants are heavily armed with rifles and at least one grenade launcher. As a result of this threat, vessels transiting the region are strongly urged to exercise extra vigilance when transiting the waters off Eastern Sabah and the Sulu-Celebes Seas; if possible it is advisable to avoid the areas altogether.

Linked to this threat, fighting between the Abu Sayyaf Group and the Philippine military continues near the port Zamboanga. The Philippine Navy has deployed additional security teams in an effort to prevent the “entry of lawless elements”. The fighting is significant due to the importance of Zamboanga for travel to and from the Sulu archipelago; which is the home of the Abu Sayyaf Group. On  30 October, two suspected Abu Sayyaf members were killed in the archipelago following a firefight with Philippine Marines. It is believed that around 40 militant fighters were involved in the engagement.

#InternationalDayofViolenceAgainstWomen Travelling female employees often are seen as vulnerable and could be seen… https://t.co/YhPtycDa72

WE ARE HIRING! Solace Global Risk are recruiting for Response Operations Managers to join our team in Poole, Dorse… https://t.co/slFNt8gmWO

2020 continues to be a turbulent year, with a second spike in the #pandemic, #environmental disasters & #terrorism… https://t.co/FuFaXDqdpo

RT @itijonline: Tonight is the night! We can't wait to celebrate with you all and see the winners of the 2020 #ITIJAwards revealed. Tune in…

Tensions are high as the #UnitedStates prepares to elect their next #President. In an unusual year, the campaign ha… https://t.co/o9YKHxlHaz

Several gunmen have opened fire in a number of locations in central #Vienna in an apparent #terrorattack that has l… https://t.co/0qwIoUBAvU