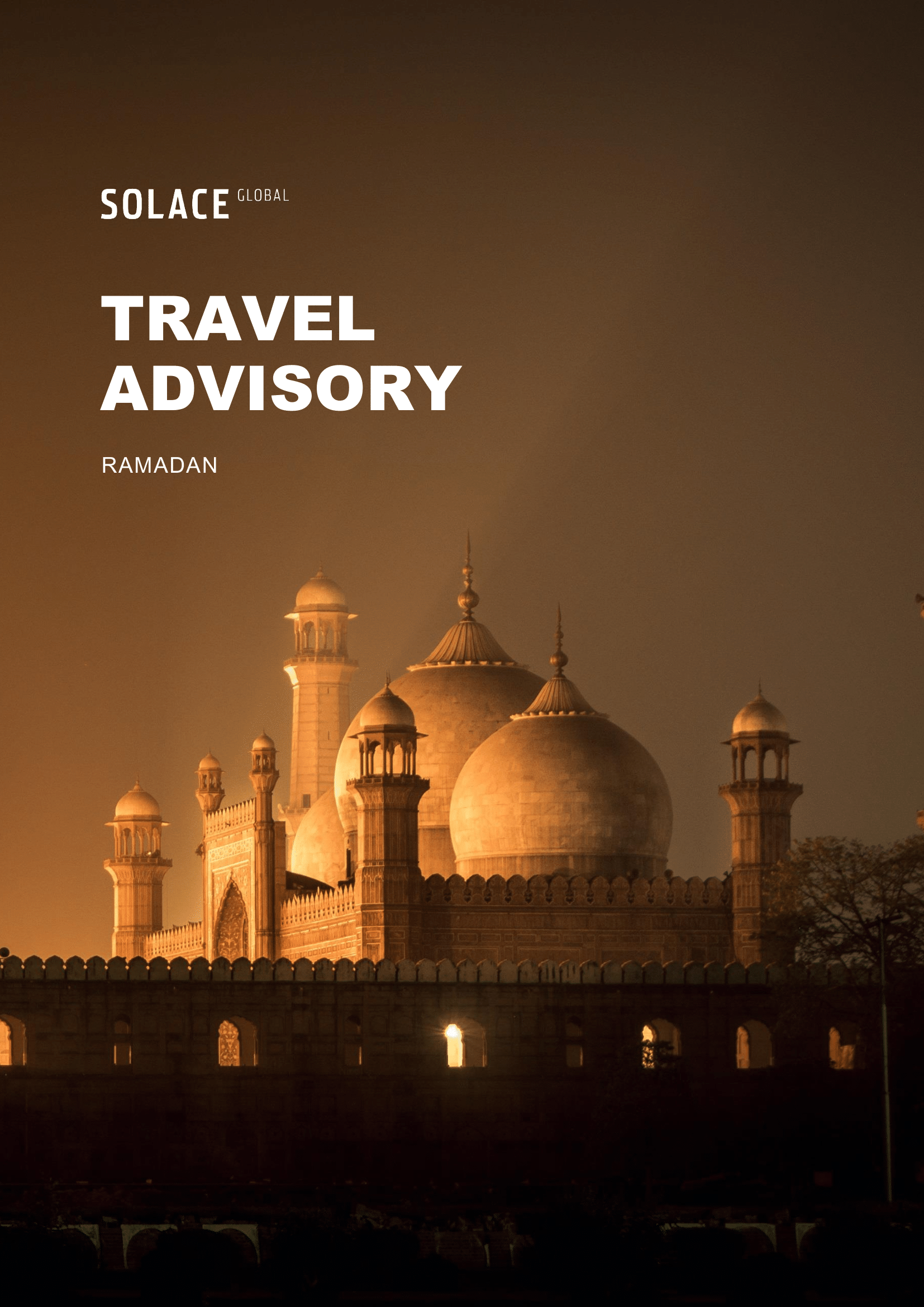 The Islamic month of Ramadan is expected to begin on 6 May and end on the evening of 4 June 2019; during the month the Muslim population worldwide is expected to fast during the daylight hours as well act in a charitable manner.

The Islamic holy month of Ramadan is due to begin on 6 May; depending on the sighting of the new moon. During Ramadan, Muslims will fast during the daylight hours; being not allowed to eat, drink, smoke or chew gum. Every able-bodied Muslim is expected to participate in Ramadan; however, exceptions are made for children, military personnel in combat, and those who are ill, elderly or pregnant.

Following sunset, Muslims take part in a celebratory meal called Iftar, when the fast is broken and a meal is shared with family and friends. During this time, there usually is an exceptionally high demand in taxis and other public transportation, while traffic congestion in cities like Dubai can result in long delays. During night hours there is a significant peak in road accidents and travel is advised against during the rush hours just prior to sunset. Additionally, towards the end of Ramadan, it is traditional for people to visit families to celebrate Eid al-Fitr, the three-day festival marking the end of the fast. Like with Iftar, individuals and businesses should plan travel around the event as business activities are likely to be impacted and transport links also see increased demands.

There is no need for individuals or businesses to cancel travel arrangements; however, they should be aware of Ramadan as it can have an impact on both travel and business. It is important to be conscious that many businesses in Muslim countries close early and operate with reduced staff for the entire month of Ramadan. Countries, such as Saudi Arabia, Qatar, the UAE and Iraq are known to reduce their business working hours during Ramadan. In the UAE, for example, the work day is reduced by two hours, and there is a country-wide ban on outdoor labour between 1200hrs and 1500hrs. The change in working hours can limit business operations in such countries while many government institutions postpone major business meetings until after Ramadan.

It is therefore important to plan ahead more than normal when travelling to the same locations during other times of the year, or even if you have travelled to other Muslim countries during Ramadan, as access to restaurants and other facilities can vary greatly. In Muslim countries that see a lot of tourists, such as Morocco and Turkey, many facilities will remain open to some extent and will serve non-Muslims. Indeed, it is possible that travellers will hardly notice much change to the normal routine in the country. However, if travelling to countries that see fewer western tourists, such as Pakistan, Iran and especially Saudi Arabia, Ramadan will be strictly observed and enforced with the majority of restaurants closed during the daylight hours.

Additionally, non-Muslim visitors are also expected not to eat or drink in public areas; this includes smoking and chewing gum. Countries which heavily uphold this tradition include Algeria, Libya, Saudi Arabia and the UAE. Indeed, in Saudi Arabia especially, it is illegal to break the fast during daylight hours in public. In some countries, such as the UAE, certain restaurants and coffee shops catering to tourists may remain open discretely.

Driving in Muslim-majority countries during Ramadan may be more erratic than usual and there is a recorded trend of an increase in traffic accidents around the time of Iftar – the time of day at which the fast is broken. Many drivers are likely to be dehydrated and hungry, while taxi drivers, who have also been fasting, may have been driving longer than is safe. This is coupled with the previously stated heightened congestion and can result in a sharp increase in traffic accidents.

While Ramadan is viewed as a time of peace for the vast majority of Muslims; extremists do use the month as a reason to carry out acts of terror. Jihadist militant groups will launch attacks to coincide with Ramadan, in a similar fashion to attacks during other significant holidays and religious festivals; as demonstrated by the Easter Sunday bombings in Sri Lanka. These groups have also launched major offensives in Afghanistan and Yemen during the holy month as well. Indeed, the leaders of the so-called Islamic State (IS) and Al-Qaeda have openly called for violence during Ramadan. In 2017, IS linked media encouraged supporters to carry out attacks on members of the public using knives, guns and vehicles, promising that the participants will receive greater rewards in paradise compared to attacks conducted in ordinary months.

The risk of further attacks on holy sites, like mosques and churches, as well as more low-level attacks is high in the coming month. In the wake of the Christchurch, New Zealand, and Sri Lanka attacks, further targeting of both Muslim and non-Muslim religious sites should be expected. This is also coupled with the recent release of a video showing Abu Bakr al-Baghdadi, the self-proclaimed Caliph of the so-called Islamic State. Al-Baghdadi’s re-appearance and rallying call increases the chance of attacks both in the Middle East and by radicalised individuals in western countries. These acts of terror can range from suicide attacks on Coptic churches in Egypt, vehicle ramming attacks in western countries, to low level targeted knife attacks.

In 2015, attacks during Ramadan occurred on 26 June in France, Kuwait, Syria, Somalia, and Tunisia, one day following a deadly massacre in Syria, in what was termed as “Vendredi Noir” (Black Friday). In 2017, there were numerous incidents globally, with attacks against a convoy of Coptic Christians in Egypt, clashes between the Philippines security forces and militants in the city of Marawi, an Islamic State truck bombing in Kabul killed 150 people as well as the London Bridge attack in the UK.

Due to the higher risk of terror attacks, increased security personnel are likely to be deployed in Muslim-majority countries; which does mitigate the risk. This will be particularly noticeable in countries such as Afghanistan and Nigeria; which have ongoing jihadist insurgencies. Western countries may also see an uptick in security around places of worship (especially mosques, which are likely to see a heightened security presence), tourist areas and busy restaurants.

Finally, there is a risk of attacks on Mosques by far-right militants or other extremist and Islamophobic groups. While attacks in a similar vein to the Christchurch assault are unlikely, they cannot be ruled out. However, incidents of graffiti, smashed windows and, possibly, offensive symbols (such as smearing pig’s blood on mosque doors) are more likely, as well as low sophistication attacks using knives and vehicles at gathering worshipers.