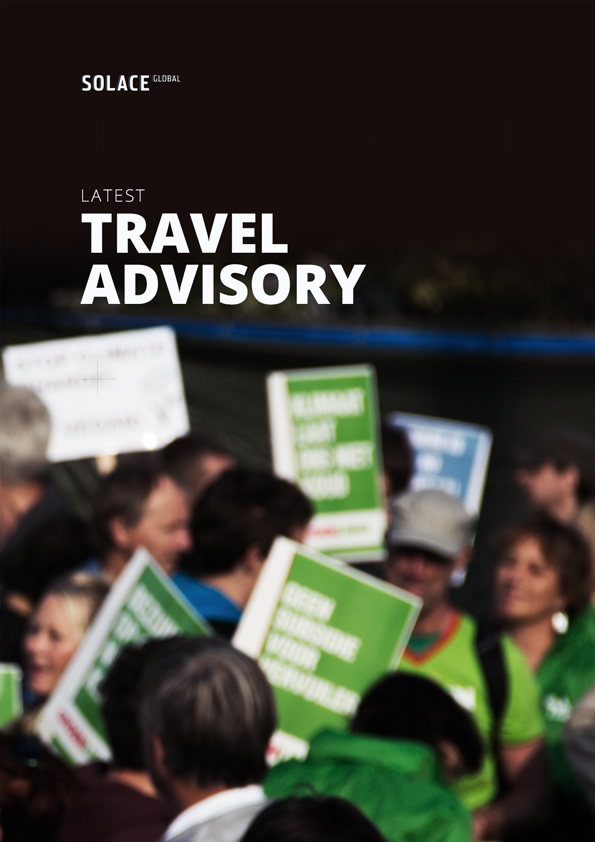 Supporters of Abdul Rashid Dostum, Afghanistan’s Vice President, have held rallies throughout northern Afghanistan to express support for his return to the country, and opposition to the arrest of Nizamuddin Qaisari, a key lieutenant in Dostum’s ethnically Uzbek militia. Dostum went into self-imposed exile in 2017 following accusations of sexual assault and torture against political opponents, in addition to his continued role in outlawed unofficial armed militias.

Civil Unrest: Supporters of Abdul Rashid Dostum, Afghanistan’s Vice President, have held rallies throughout northern Afghanistan to express support for his return to the country, and opposition to the arrest of Nizamuddin Qaisari, a key lieutenant in Dostum’s ethnically Uzbek militia. Dostum went into self-imposed exile in 2017 following accusations of sexual assault and torture against political opponents, in addition to his continued role in outlawed unofficial armed militias.

Those demonstrating in support of Dostum, predominantly drawn from the Uzbek minority population, blockaded government offices throughout Faryab, Balkh, Jawzjan, and Sar-e Pul provinces, as well as preventing travel along the primary highway linking Afghanistan with Uzbekistan from 02 July. The highway has since been conditionally re-opened. Additional protests occurred within the capital, Kabul.

On 16 July, a suicide bomber was shot and killed whilst attempting to attack the protests in Kabul. No group has claimed responsibility, however previous recent attacks against civilian rallies and political events have been attributed to Islamic State’s Khorsan Province, known as ISIS-K.

Dostum, Vice President to Ashraf Ghani, is a highly prominent member of Afghan’s Uzbek minority, a position earned by over 40 years of participation in Afghanistan’s frequently violent politics, and leadership of the militias which have often proved to be critical factions. Throughout this career, he has played roles on multiple sides of the intricate web of conflicts within Afghanistan, against both domestic and international forces. In common with many other major warlords, he has also had numerous allegations of human rights abuses and other accusations laid before him. Specific claims of sexual abuse against a rival made in 2016 were the driving factor behind his self-exile in Turkey.

The protests by his supporters appear to have been triggered by the arrest of his key lieutenant, Nizamuddin Qaisari, by Afghan security forces, which was briefly resisted by Qaisari’s retinue. A statement by government personnel indicated that the arrest was part of a wider operation to reduce the influence of militias throughout the country by detaining senior leaders, including those with ties to the government who refused to renounce their militia affiliation. That these protests then became affiliated with Dostum is a firm indicator of his continued role in regional politics in spite of his absence. There has also been limited reporting to suggest that the protests have taken on other local issues; the group obstructing the highway around Mazar-e-Shariff removed their roadblocks following assurances from the regional government that heavily damaged areas of the road would be resurfaced.

Dostum’s intended return is highly likely to be due to the general election due to be held across Afghanistan in October 2018; Dostum likely wishes to shore-up his power base in order to seek re-election. President Ghani issued a statement on 15 July 18 suggesting that Dostum’s return may be approved, although it remains to be seen whether he will be held accountable for the accusations against him. His potential return raises the spectre of tensions between the Afghan government and its international backers. These states, including the US, openly wish for the Afghan state to prevent and punish offences committed by office holders as a significant step on the way to reducing the country’s endemic corruption and use of violence within the political sphere. If Dostum is permitted to return uninhibited, this may significantly undermine the purpose of detaining Qaisari and the wider efforts to impose the effective rule of law upon the country. It would, however, be in line with the parallel effort to draw the Taliban into the political fold with the implementation of amnesties.

Aside from disputed reports of violence at the time of Qaisari’s arrest, the protests have so far been notable for their relative absence of violence. Afghanistan’s decades of violence have been regularly marked by militias acting with extreme violence to resist the imposition of state control, and the absence of this following the Qaisari arrest and pro-Dostum protests is noteworthy. Whether this peace continues when Dostum returns to Afghanistan, and in the face of his potential arrest, remains to be seen.

Aside from the Uzbek militias tied to Dostum and Qaisari, numerous armed groups continue to operate within the country. Most notably, these groups operate under the loose umbrella of the Taliban, or ISIS-K. The attempted attack in Kabul on 16 July demonstrates that these protests are attractive targets to some of these groups, and further efforts, particularly by ISIS-K are likely. The Taliban are less likely to conduct attacks directly against protesters, due to their greater reliance on the support of the local population. It is a realistic possibility, however, that Taliban cells throughout the country may seek to capitalise on any opportunities granted to them by the diversion of security forces in response to the unrest.

Travellers required to travel to northern Afghanistan should take all reasonable efforts to monitor the progress of the protests and make all appropriate efforts to avoid them. Although the protests have remained relatively peaceful at this stage, the prevalence of weapons throughout the country means that any event leading to high public tensions may escalate to lethal violence. It is also likely that other insurgent groups will seek to conduct mass casualty attacks against the protesters. There also remains a realistic probability that protesters imposing roadblocks may seek to leverage the opportunity to extract payment from travellers.

Solace Global would advise clients to employ enhanced security measures when visiting Afghanistan.  – an armed security detail and the use of either low profile soft skin or B6 armoured vehicles should be considered the minimum security standard for all travel throughout the country. For certain visitors, itineraries, or locations, this level of security may need to be heightened further. Travellers should consider the use of safe houses or other secure accommodation. A travel tracking app with an intelligence feed will permit employers to exercise an additional duty of care and allow travellers to be kept aware of the relevant changes in the security environment.