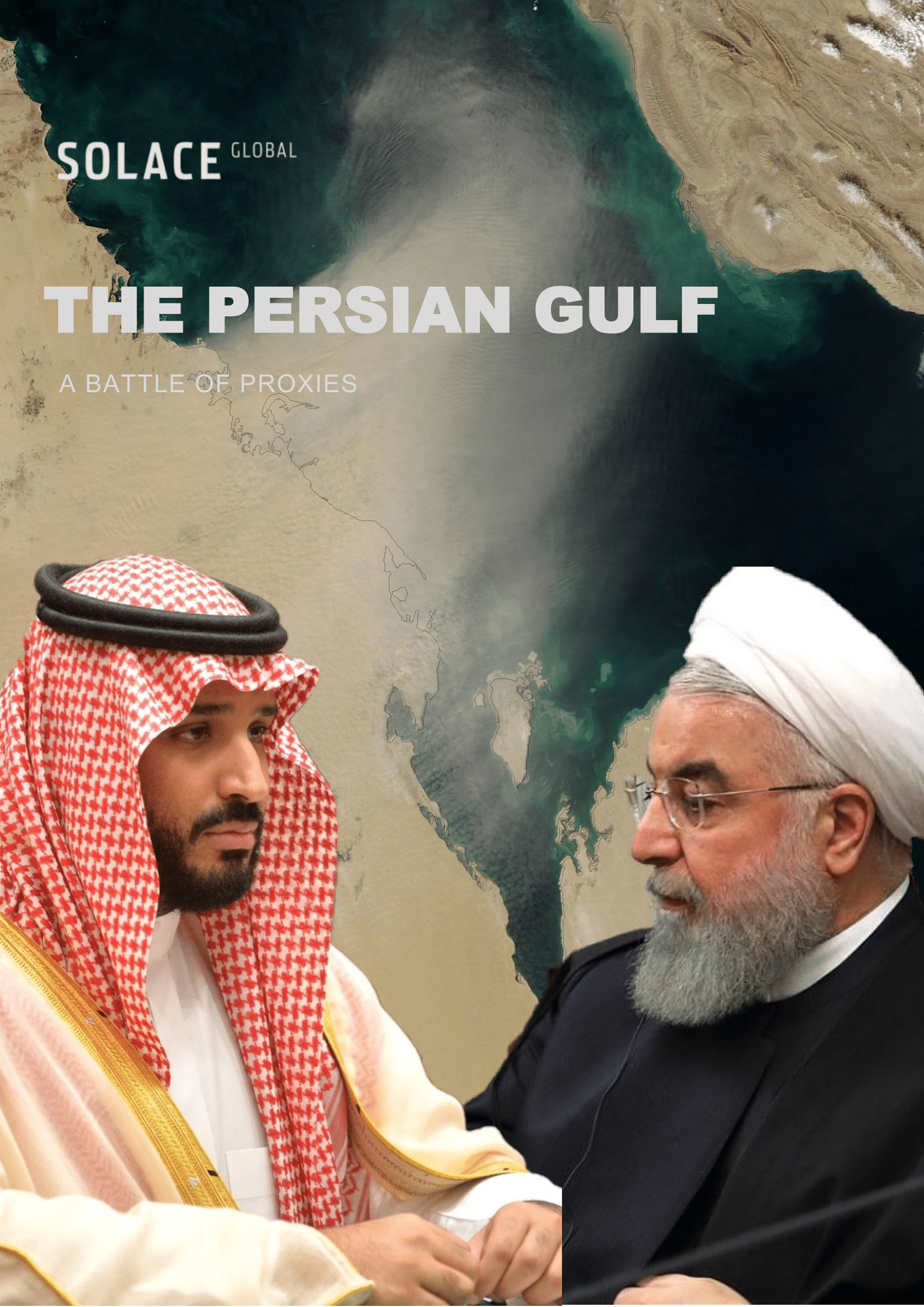 The Persian Gulf – A Battle of Proxies

United States officials immediately accused Iran, Saudi Arabia’s longstanding ideological, geopolitical and economic rival, of perpetrating the attack, due to its vested interest in disrupting the oil production and trade in the region, and in retaliation to the American embargo on its oil exports. Iran denied any responsibility, accusing Washington of running a disinformation campaign in order to justify its militarisation of the region, while also hinting at its own ballistic capabilities, which would be able to strike several key targets, including American bases and military vessels.

A declassified set of satellite images was later released by Washington, suggesting that the damage was consistent with drone and missile strikes coming from the north-north-west rather than Saudi’s southern border with Yemen. Saudi forensic analysts have displayed the remnants of the cruise missiles and drones used in the strike, which seem to indicate an Iranian origin. However, their programmed trajectory remains unknown. While evidence of an Iranian-manufactured weapons does not necessarily equate to the country’s direct involvement is the strike, Tehran is known for supplying military assets to its proxy allies. Thus, identifying the missile’s trajectory could confirm the American suspicions of a launch from a southern Iranian base that crossed over Iraqi and Kuwaiti airspace before reaching the oil production facilities. This could also explain the failure of the US-mad Patriot missile defence system to detect and neutralise the attack.

A direct attack from Tehran indeed represent a significant escalation in Iranian regional aggressiveness, so far mostly manifesting in hostile rhetoric, episodes of maritime instability, and low-level retaliatory actions, such as the shooting down of an American drone allegedly flying in Iranian airspace. However, it would also put Washington in a strategic impasse in deciding how to respond to such a bold act of hostility: maintaining stability in the Persian Gulf and avoiding disruptions in its oil production is paramount for both the US and the international community, while a failure to demonstrate its support to its oldest strategic ally in the Middle East would likely lead the Saudi to question the terms of their entente.

This is reflected in President Trump’s initial combative remarks of the US being “locked and loaded”, ready to retaliate against what it believed to be Iranian direct attack against Saudi critical infrastructure, quickly followed by more moderate remarks reiterating his aversion to initiating another Middle Eastern war. In this sense, it seems likely that the US would choose to exploit existing warfare theatres to pursue a more aggressive retaliatory strategy against Iran, such as the conflict in Yemen and Syria, as well as counter-insurgency operations in Iraq.

All About That Persian Oil

The extensive damage to the two sites, amounting to the most catastrophic attack against Saudi territory since the establishment of its coalition in Yemen four years ago, represents a significant escalation in the asymmetric warfare campaign against the country’s critical infrastructure. Since the beginning of 2019, the range and precision of the Houthi strikes against Riyadh’s facilities have expanded significantly: together with routine offensives against airports and military bases, the Houthis have increasingly targeted key oil production facilities, including the East-West pipeline used by Saudi Arabia to reduce its reliance on shipping through the Strait of Hormuz.

While the origin of the pipeline attack has also been disputed, as the main strategic beneficiary of any disruption in Riyadh’s oil production remains Iran, which both Saudi Arabia and the US consider responsible for all advances in Yemeni power projection capability. 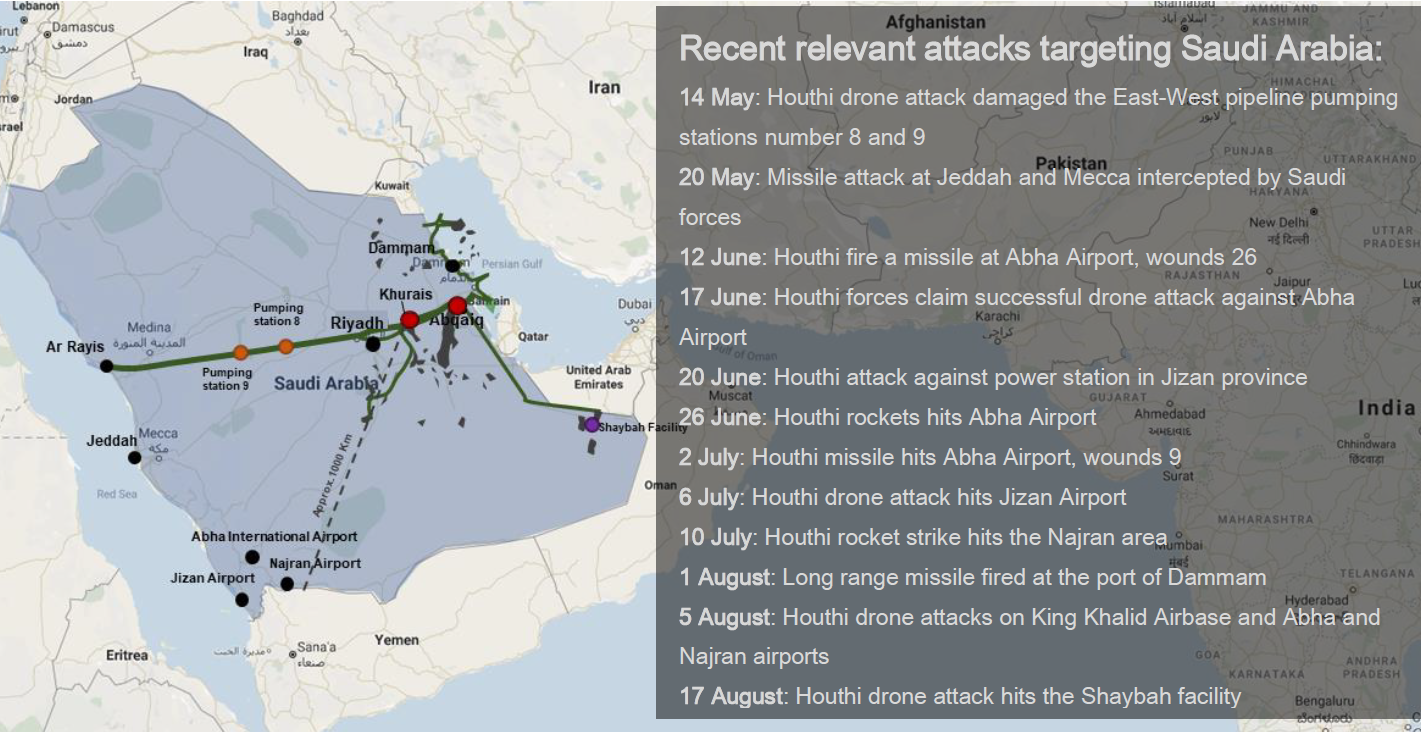 The recent series of attacks showed a more deliberate, although calibrated, attempt to damage the Saudi oil production infrastructure, indicating a clear intention to cause a longer-term disruption in Saudi’s oil output. As such, the 2018 UN reports indicating an extended range of Houthi drones and missiles, which can reach up to 1,500 km, has sparked widespread concerns in Saudi Arabia, whose critical infrastructure is now within range of both Iranian missiles, as well as those of its proxy allies.

While Saudi Aramco has made some significant investments in securing its infrastructure both from conventional and cyber offensives, the success of these latest strikes has highlighted a persisting vulnerability in the country’s oil production facilities. Moreover, the timing of the offensive just after the announcement by the oil giant Saudi Aramco that they were ready to for their first stock market launch with an historical IPO worth 1.7, would further indicate an attempt to fuel insecurity in the Persian oil market.

This would, in turn, be consistent with Iran’s strategic objective of preventing the other Gulf states from solidifying their foothold on what was previously the Iranian market share, as well as signalling its objective of fuelling regional instability in retaliation to the gradual collapse of the JCPOA (or Iran Nuclear deal).

On 4 September, Iran also announced its intention to further reduce its compliance with the JCPOA, allowing nuclear activities related to R&D to resume. As first announced in May, Iran has committed to a gradual disengagement from the deal’s restrictions at a 60-day rate unless a feasible strategy is agreed upon. However, despite the dialogue with European stakeholders continuing, no permanent has been found yet and the latest attack on Saudi Arabia is likely to further decrease the chances of any multilateral effort or bilateral talks between Washington and Tehran, despite no clear evidence of Iran being the primary perpetrator.

Regardless of the actual culprit of the attacks, their consistency with Iran’s strategic objectives of fuelling regional instability while maintaining a plausible degree of deniability is clear. The escalation of the offensive campaign against Saudi’s critical infrastructure is also proportional with the heightened intensity of President Trump’s “maximum pressure” policy towards Tehran, as well as the collapse of the Nuclear Deal. In this context and despite the declarations by Iranian officials of having no knowledge of the attacks, it is likely that the Tehran did expect to be held accountable for at least supplying its proxy allies with the technology necessary to effectively reach and strike the facilities. The ability of both Houthi and Iraqi militias to independently manufacture and maintain such power projection technology has been repeatedly questioned, particularly in the context of prolonged warfare and blockades.

In order to respond to the increased pressure by both the US and the Gulf countries, Iran continues to pursue a strategy of strengthening its proxy allies in Yemen, Iraq, Syria and Lebanon, increasing its overall leverage and responding to what it perceives as an attempt to force its leadership to the negotiation table, or even entice regime change. 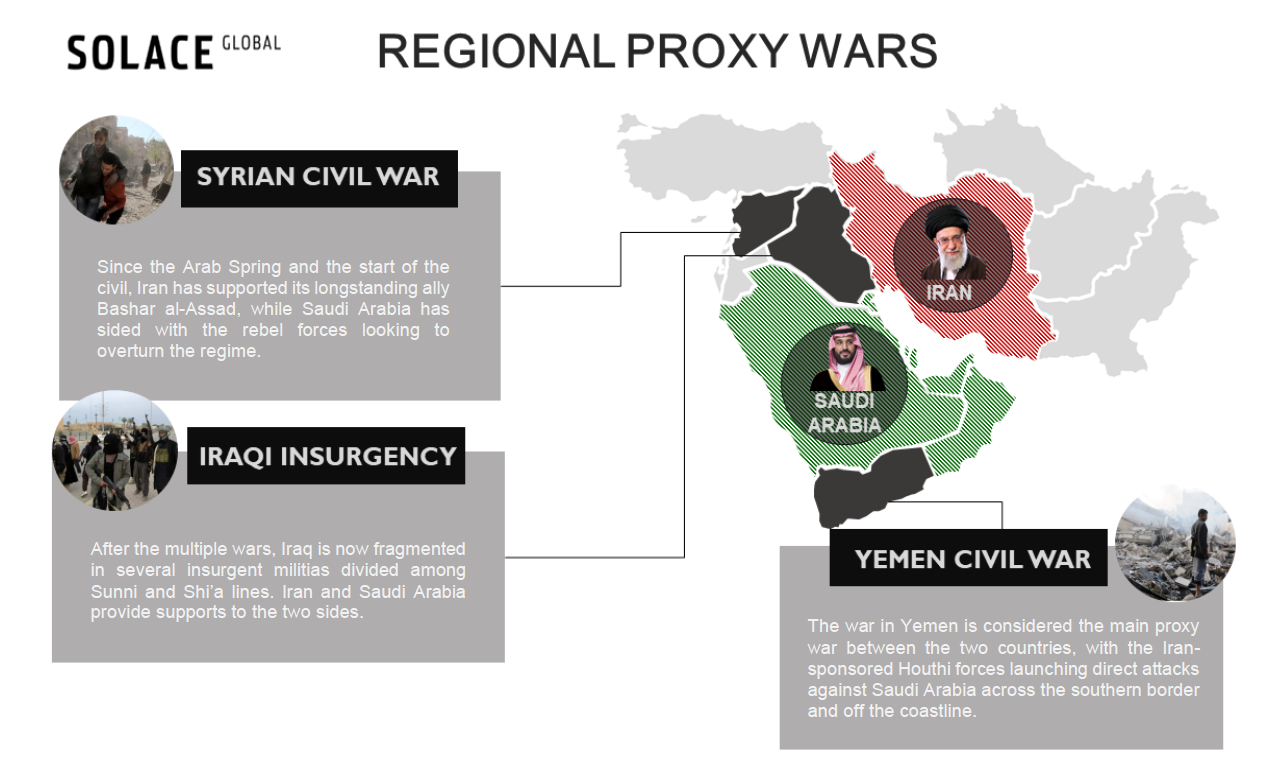 Moreover, the economic strain caused by increasing US sanctions has likely played a role in emboldening the Islamic Revolutionary Guard (IRG) and the more belligerent parts of the Iranian leadership to pursue asymmetric strategies to damage Saudi’s infrastructure and worsen the overall geopolitical stability of the Persian region. Iran is keenly aware of Saudi Arabia’s macroeconomic dependencies and its ballistic and cruise missile force, the largest in the Middle East, represents a credible threat to Saudi Arabia. This is coupled with an understanding that the stability of the Persian Gulf and its oil production represents a key priority at a global level, with the main recipients of gulf oil exports being overwhelmingly Asian countries and, in particular, China.

Thus, Iran remains cognisant of the strong international deterrence to any retaliatory strategy by the US and Saudi Arabia involving direct military conflict, particularly as President Donald Trump has repeatedly demonstrated his aversion to another act of military adventurism in the Middle East.

The US has now announced its intention to form a coalition to deter Iranian aggression. While no clarification regarding its potential members or role in the region has been given, this might result in the build-up of American military resources in the Saudi territories and their vicinity. Washington is already leading a maritime protection coalition, aimed at guaranteeing freedom of navigation in the Strait of Hormuz, which is gaining moderate support, as shown by the UAE recent decision to join. While this new more aggressive initiative is highly likely to escalate the already high tensions between the Gulf countries and Iran, it is unlikely for regional stakeholders to support a provocative strategy that might heighten the potential for conflict in the Persian Gulf.

The strategic impasse is evident: while the US-Saudi faction must respond to such show of force to avoid its normalisation through impunity, its options are extremely limited outside the realm of economic and political pressure. Together with the increased sanctions, which have been already announced by the Trump administration, a response is likely to come through the same proxy theatres, particularly as Iran currently has troops in Syria.

While tensions have escalated considerably in the aftermath of the attack, which has led to increasingly aggressive and accusatory exchanges on the international stage, the potential for another regional conflict remains low. However, the strategic targeting of critical infrastructures, which often host foreign workers, is likely to continue. Additionally, the majority of the strikes against oil and gas sites have shown the intention to avoid resulting in civilian casualties. It remains unlikely that urban centres will be targeted at this time.

Given that the security situation in Saudi Arabia and the wider Gulf remains volatile, any escalation is likely to be rapid. As such, businesses and travellers in the region, especially those linked to the oil and gas industry, should keep up to date with the latest media reports. Companies should consider putting in place and reviewing evacuation protocols to minimise risk should the situation deteriorate further and confirm they know which employees are in-country and where.

At this time, travel can continue as normal although all staff based in-country or travelling through should be made aware of the situation and know the company’s protocols for security. Businesses should have pre-defined triggers in place so that should the security situation change, and tensions escalate, staff move through a process of readiness which could culminate in them evacuating the country. In line with these triggers, businesses should have robust business continuity and evacuation plans in place and all staff either based in-country or travelling to the destination should be aware of the plans and know what to do in the event a trigger is met.