At least 300 people have been killed in two bomb attacks in Mogadishu on 14 October. The first attack reportedly saw a lorry packed with explosives ram through the barrier at a security checkpoint, before detonating near the entrance to the Safari Hotel. The attack targeted a busy street close to several important ministries in Somalia’s capital. Hundreds are known to have been injured and the death toll is expected to rise. 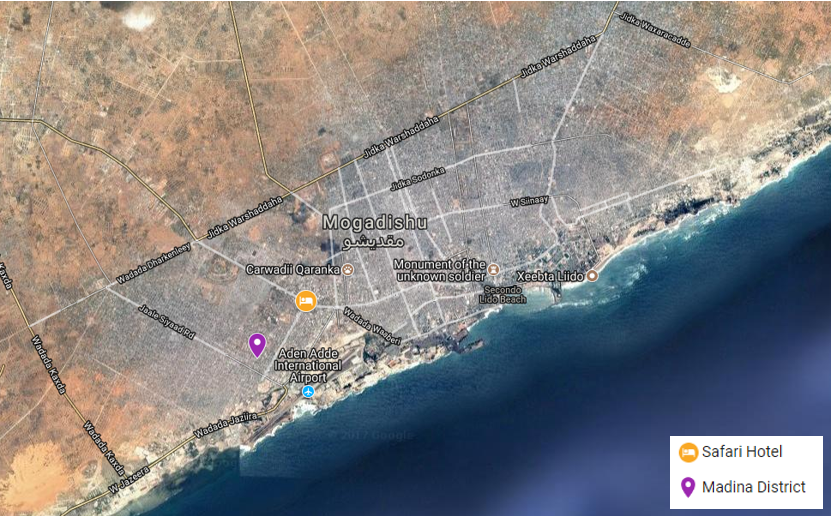 Terrorism: At least 300 people have been killed in two bomb attacks in Mogadishu on 14 October. The first attack reportedly saw a lorry packed with explosives ram through the barrier at a security checkpoint, before detonating near the entrance to the Safari Hotel. The attack targeted a busy street close to several important ministries in Somalia’s capital. Hundreds are known to have been injured and the death toll is expected to rise.

Shortly after the first blast, a second vehicle bomb was detonated in the nearby Madina district, killing two instantly and injuring several more. The Somali government has blamed the attack on Al Shabab, the Islamist terror group, who are engaged in an ongoing insurgency against the Somali government. Al Shabab have yet to claim responsibility.

Numerous buildings and vehicles were destroyed in the blast; recovery operations are ongoing. Medical evacuations to Turkey have begun for many of those who are too severely injured for treatment in Mogadishu, with at least 30 critically injured people already airlifted out to Turkey. Somali President Mohamed Abdullahi Mohamed declared three days of mourning. The death toll is expected to increase over the coming days with rescue workers stating that the true number of deaths may be impossible to establish. Protests against the killings have already occurred.

Al Shabab was forced out of Somalia’s capital Mogadishu in 2011 following an African Union-led offensive and has recently suffered a series of territorial losses to AMISOM (African Union Mission in Somalia) and Somali Government troops, supported by US drone strikes and aid. After losing Port Kismayo in September 2012, the group’s finances plummeted; this can be seen as a contributing factor to the attacks which have been conducted in Mogadishu. In January 2017, the group killed 28 in a double car bomb outside a hotel near the Somali parliament and in June 2017 it killed 31 in an attack on a pizza restaurant. The group has been reported to have formed links not only with Al Qaeda but other militant groups in Africa, such as Boko Haram. Al Shabab retains the capacity to mount large, complex bomb attacks; over the past three years, the number of civilians killed by insurgent bombings has steadily climbed.

This attack is the deadliest terror attack in Somalia since the Islamist Al Shabab group launched its insurgency in 2007, and the deadliest single attack in the world in the last few years. Although Al Shabab has not yet claimed responsibility for the attack, it is unlikely that it will do so. The group often avoid claiming responsibility for attacks when they feel it could inhibit its desired image. It is probable that they did not expect the attack to cause this level of damage or loss of civilian life, particularly if the intended target was the foreign ministry. The bomb explosion caused the knock-on explosion of an oil tanker, multiplying the damage. Moreover, with reports suggesting an attack at the foreign ministry was the aim, it seems clear that civilians were not the primary target. It should also be noted that a primary reason the death toll is expected to increase is the poor medical and transport infrastructure in Mogadishu.

Mogadishu has endured high levels of violence from Al Shabab for several years. The group is known for carrying out deadly car bomb attacks in the city as well as using grenades and guns in its ongoing effort to undermine the UN-backed government; government ministers are routinely targeted in assassination attempts. Al Shabab are not solely engaged in a terror campaign against the state in Mogadishu, they are also actively involved in an insurgency against Somali and African Union troops, actively supplanting the government within the territory it occupies. The terror group vowed to increase its terror and insurgent activities after US President Donald Trump and Somalia President Mohamed Abdullahi Mohamed vowed new military efforts to defeat it.

The bombing in Mogadishu may now intensify a growing US commitment to pursuing a more active role in Somalia. The US president, Donald Trump, designated Somalia a “zone of active hostilities”, allowing commanders greater autonomy when conducting operations. The effect of this is to broaden the range of possible targets and relaxing restrictions designed to prevent civilian casualties. President Trump has also authorised the deployment of regular US forces to Somalia for the first time since 1994. A one-star general was assigned to coordinate operations from a compound within Mogadishu’s airport. U.S. Special Operations forces in Somalia have been augmented with conventional US troops who provide a variety of training for the Somali forces. Further involvement by the US in Somalia is likely to increase the challenges faced from counter-insurgency. This attack has seen a call for greater input from international governments to assist Somalia.

Travellers should note that protests have already been reported in Mogadishu and elsewhere against Al Shabab and the poor security situation in the country. These protests are set to continue. It is unclear what impact they may have on government stability. Travellers should avoid all large gatherings. Protests regularly turn violent with clashes between police and protestors are often reported. Large crowds are also a prime target for militant bomb and gun attacks.

Security levels are likely to be increased further in Mogadishu, while the conflict may escalate. US, Somali, and AMISON forces are also likely to further increase their attempts to root out militants across the country. This may lead to further retaliatory attacks by Al Shabab insurgents, with the potential to increase the threat of terrorism in the country. In the longer term, the Somali government and international partners will need to ensure that not only physical security is improved in Somalia but also food security, education, and economic opportunities.

If caught in a terror situation, travellers are advised to RUN – HIDE – TELL – FIGHT. RUN – If in a location where gunfire or explosions are heard, leave the area or building by any safe and available exit immediately. HIDE – If unable to run away, find suitable cover or barricade yourself in a room. Remember to silence your phone and turn vibrate off. TELL – Inform emergency services or alert someone who is able to do it for you. Once police arrive, comply with their instructions and do not make any sudden movements.  FIGHT – As a last resort, if confronted with a gunman, it is recommended to fight back by using the element of surprise by shouting, screaming and running fast at the attacker. If sheltered with others, convince them to do the same and rush the attacker all at once. Ensure the person entering the shelter is the attacker and not law enforcement.

Solace Global would strongly advise clients to only travel to Somalia with pre-arranged security in place. The minimum level of security in the country involves an armoured vehicle, close protection teams, and a secondary convoy vehicle in case of an attack or vehicle breakdown. It is also advisable that travellers use a safe house or compound with 24-hour security. Visitors to Somalia may wish to receive Somalia-specific hostile environment training. Travellers are also advised to use travel-tracking technology with an intelligence feed as well as regularly scheduled check-ins with a 24-hour operations centre. This should enable a traveller to be aware of any security updates within their vicinity, and to update others of their movements in case of an emergency.