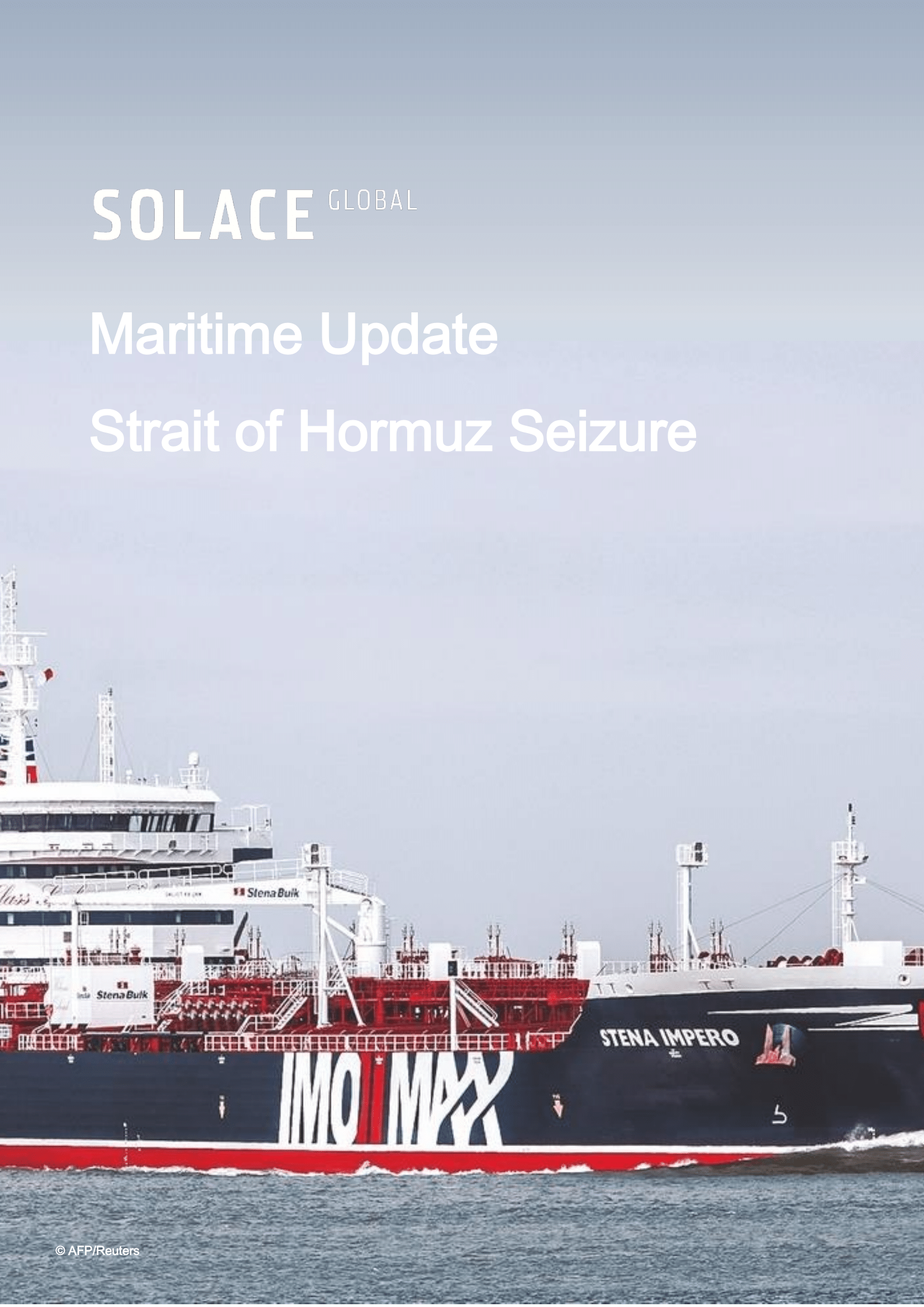 On 20 July, the Islamic Revolutionary Guard Corps seized a Bitish-flagged tanker, the Stena Impero. The vessel took a sharp unplanned turn towards Iran late on Friday evening/early Saturday morning while a second vessel, the Liberian flagged, but British owned, MV Mesdar, was also boarded. The Mesdar was then allowed to continue its journey following a brief boarding. The British warship, HMS Montrose was reportedly within 10 minutes away from intercepting the vessel before it entered Iranian territorial waters. The tanker is now reportedly anchored off Bandar Abbas, where the Revolutionary Guards have a military base. The situation remains tense with Britain and allies warning of severe consequences but also calling for a de-escalation.

The latest, and possibly the most significant from a political context, incident involving Iran occurred on 20 July when marines from the Islamic Revolutionary Guards Corps seized a British-flagged tanker, the Stena Impero. The vessel took a sharp unplanned turn towards Iran late on Friday evening/early Saturday morning while a second vessel, the Liberian flagged, but British owned, MV Mesdar, was also boarded. The Mesdar was then allowed to continue its journey following a brief boarding.
Tensions in the region are now possibly at their highest level since the United States withdrew from the Iran Nuclear Deal. While Britain has ruled out military options for the time being, possibly for two reasons, one, in an effort to control the situation, two, because they lack the effective means, a strong response has been promised. The actual threat to vessels in the region remains unchanged, with a possible decrease in the immediate risk, as it is unlikely that further vessels to be targeted while negotiations are ongoing over the current one.

The Stena Impero was seized by the Iranian Revolutionary Guard Corps late on Friday/early Saturday and rerouted to Iran. The British warship, HMS Montrose was reportedly within 10 minutes away from intercepting the vessel before it entered Iranian territorial waters. The tanker is now reportedly anchored off Bandar Abbas, where the Revolutionary Guards have a military base. The situation remains tense with Britain and allies warning of severe consequences but also calling for a de-escalation.
This is the second tanker that Iran has seized successfully, the first was the MT Riah, a small oil products tanker. The vessel was initially identified as Panama-flagged and Emirati-owned. However, the United Arab Emirates denied ownership and added that no Emiratis had been detained. However, the Stena Impero, though Swedish owned, was British registered, with Iran threatening to seize British vessels in the region ever since the Seizure of the Grace 1 in relation to EU sanctions.
The Iranian Revolutionary Guard had failed in a previous attempt to seize a British flagged vessel, the British Heritage, following the intervention by HMS Montrose. While the previous, more violent, dual attacks to the east of the Strait of Hormuz and the attack on four vessels at anchor in Fujairah, also increase the wider regional tensions. All of which was discussed in our previous report, Maritime Update – Persian Gulf.
There have been recent events in the wider Middle East that demonstrate the actual tensions that exist. The United States has recently enacted the Global Magnitsky Act which comprises of sanctions designed to restrict the ability of two leaders of Iranian-allied militias to travel or conduct financial transactions. The aim of the sanctions is to curtail Iran’s reach into Iraq.
In a possibly related incident, there was also an explosion at a warehouse in Iraq on the same day as the seizure of the Stena Impero. It is believed that the explosion was caused by a drone (or drones) strike and deliberately targeted the warehouse, which formed part of a weapons depot for Iranian-backed militias in Iraq. While the strike may not have been connected to the tensions in the gulf, it highlights the wider regional complexity that exists throughout the Middle East. Indeed, no claim of responsibility has been made for the strike as of yet, with both the United States and Israel possibly being involved.

The seizure incident is now the next chapter in a growing and ongoing saga surrounding the Strait of Hormuz and the Iran Nuclear Deal. For more information on the Iran Nuclear deal, have a read of our report, The Iran Deal: why is it collapsing and what comes next?. It remains highly unlikely that this will be the last chapter, or incident, now.
As it stands, the seizure marks a massive crisis that is only going to get bigger. Iran is going to want to internationalise this as much as possible, their economy is suffering, with some believing that it is close to collapse, hard-line factions within their government are being empowered as they look for a way out of sanctions; which is impossible unless America comes back to the table over the Iran deal.
Every hostile act, such as this, elevates the risk of a wider conflict between Iran and its numerous adversaries. The possibility of British sanctions now is only likely to continue the current trend, likely leading Iran to engage in even more provocations, which would, in turn, increase the chance that the United States and allies resort to limited military strikes targeting Iranian military assets.
The future of the situation is that we are going to continue having these incidents and standoffs until one of them escalates, most likely by accident, resulting in what could possibly be a full-blown conflict, that no one wants. As such, it is now an almost certainty that there will be some sort of convoy or escort system employed in the region. Especially given that it was not just a British flagged, Swedish owned tanker targeted, but also a Liberian flagged, British owned tanker that was stopped; not to mention the previous attacks that targeted a range of vessels, flags and owners. In this sense, there is a growing acceptance of the US-led maritime coalition, built on a stated purpose of guaranteeing freedom of navigation, but which will put additional military pressure in the vicinity of Iran.
While this incident may be the catalyst for escalation in the coming days, weeks and months, ironically, it may also be the trigger for the calming of tensions. The negotiations over the release of the vessel are unlikely to be solved over the course of a couple of days, or even in the coming weeks. There may now be a quiet few weeks and months while negotiations are ongoing, with the additional benefit of any talks being used as a backdoor to potentially reviving the Iran Deal, or giving Iran some way of stepping down or receiving relief.

What now for vessels in the Gulf?

Regardless, companies and masters operating in the region in the coming days and weeks will understandably be nervous. Six vessels have been attacked and damaged, one quite notably, while four, possibly more, vessels have been targeted for seizure by the Iranian Revolutionary Guards; two of which are now in Iranian custody. This has resulted in a significant rise in premiums on insurance for vessels entering the Gulf of Oman, Straits of Hormuz and the Persian Gulf.
However, this latest incident is only going to increase the number of warships in the region, with convoy and escort missions being highly likely as a result. The actual risk to ships will now most likely now go down, making operations safer in the region. It would be surprising for Iran to attempt another seizure, or for there to be another attack while talks are ongoing. However, extreme caution is still strongly advised, should these talks fail to succeed or stall, Iran, or at least hard-liners such as those in the revolutionary guards, may look to change the arithmetic of the situation. With the further targeting of vessels and, possibly, further incidents such as those at Fujairah and in the Gulf of Oman all possible.
One final wildcard to remember is that we do not know what is happening inside Iran, is the Revolutionary Guard acting on their own, or are they following orders from officials in Tehran. This wildcard scenario means that companies, vessel owners and masters should approach the straits with caution, employ additional watches and, above all else, comply to all instructions issued by military forces in the region; regardless of their nationality.