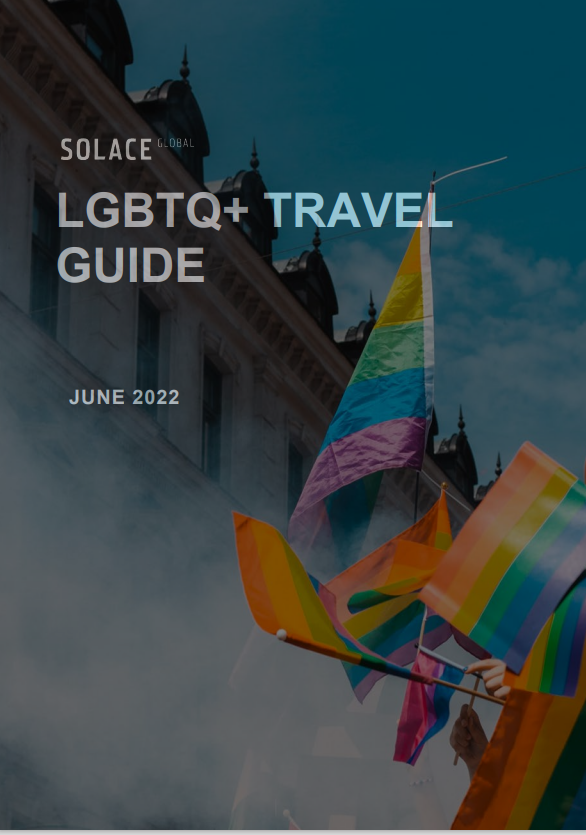 Increased risk for LGBTQ+ travellers can be overlooked, especially to countries with heteronormative cultures, such as the Middle East, parts of Africa and other nations where the legal regime or prevailing cultural practices are hostile towards such individuals.

This 15 page report covers a broad spectrum of issues faced by LGBTQ+ travellers, with advice how to mitigate the risk.

Increased risk for LGBTQ+ travellers can be overlooked, especially to countries with heteronormative cultures, such as the Middle East, parts of Africa and other nations where the legal regime or prevailing cultural practices are hostile towards such individuals. While most westernised countries have an inclusive stance towards persons in the LGBTQ+ community, there remains an increased level of risk for international travel, that should be reflected in travel policies regardless of the destination.

This is the second edition of our guide, which will highlight some of the additional challenges that LGBTQ+ people may face during travel. It offers advice for both LGBTQ+ persons and company risk mangers on how to negate these risks. This report covers a broad spectrum of issues, however as the risks faced by travellers are complex and wide-ranging, additional links are provided at the end of the report to explore this topic in further detail.

Major changes for LGBTQ+ travellers over the past 12 months

Since our last report was published, there have been several notable instances of progress being made across the world in terms of increasing acceptance of LGBTQ+ persons and issues. This includes decriminalising their right to exist and access to information around being LGBTQ+. It also increasingly involves providing legal protections against discrimination, and provisions for their relationship, marital status, and their right to have families. Alongside this, there have been some setbacks, such as the increasing state censorship of LGBTQ+ issues in certain US states, which have occurred in places which were already seen as hostile towards the LGBTQ+ community. As such, the effect is to entrench anti-LGBTQ+ sentiment only further.

Since June 2021 several more nations have banned conversion therapy, whilst in Namibia the courts delivered the verdict that the country’s constitution bans discrimination based on sexual orientation. Further to this, November 2021 saw the Botswanan Court of Appeal (the nation’s highest court) uphold the 2019 ruling that decriminalised homosexuality. As a result of this ruling, two sections of the penal code that had outlawed homosexuality have been struck off the legal statute books. This verdict comes despite the Botswanan state trying to argue that the laws needed to stand as there was “no evidence” that society’s attitude towards LGBTQ+ issues had changed. The 2019 ruling however was upheld in a unanimous decision by the Court of Appeal’s five judges. President of the Court of Appeal, Ian Kirby, stated afterwards that the “criminalisation of consensual same-sex activities violated the constitutional rights of lesbians, gays, bisexuals and transgender persons to dignity, liberty, privacy and equality”.

In Poland, provincial level courts have ruled that the various “anti-LGBTQ+ resolutions” or “LGBTQ+ free zones” which have appeared in recent years and had warned of the “homoterror” created by “left-liberal groups” are in “gross violation of the law.” The latest were struck down in May 2022 by the Provincial court of Lublin. As a result, Polish courts have now ruled against nine of these resolutions. Some of these rulings have since been referred to the Supreme Administrative Court (NSA) in Warsaw where the final rulings will undoubtedly be closely examined and waited for.

Two more states, Chile and Switzerland, have legalised same sex marriage in the last twelve months. In Tokyo, Japan, the Metropolitan government announced in December 2021 that they would introduce same sex partnerships in law across the metropolitan region, alongside this, a court in Sapporo in the north of the country ruled that same sex couples not being able to marry is unconstitutional – especially given the right to a same sex relationship has been legal in Japan since 1880.

Complete the form and the report will be emailed to you.

Please check your junk folder if not received.