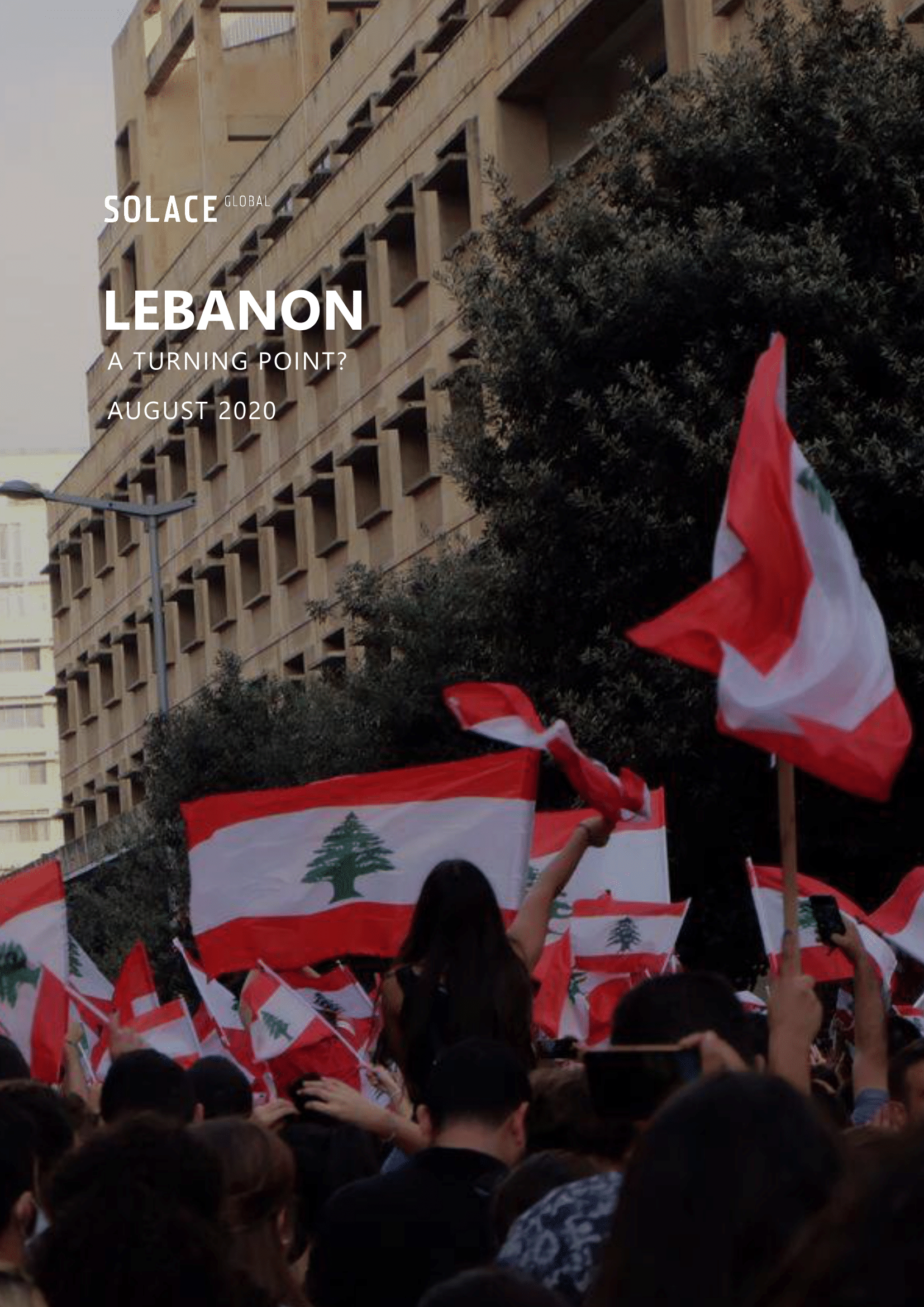 On 4 August 2020, an explosion devastated Beirut, killing at least 220 people, injuring more than 6,000 and displacing around 300,000. After an initial period of mourning, violent protests erupted in the Lebanese capital, with demonstrators demanding political change.

On 4 August 2020, an explosion devastated Beirut, killing at least 220 people, injuring more than 6,000 and displacing around 300,000. After an initial period of mourning, violent protests erupted in the Lebanese capital, with demonstrators demanding political change.

After two days of violent unrest, the Lebanese Prime Minister and his cabinet officially announced their resignation, hoping to pacify the general public and start the process of recovery. Despite stepping down, the current government members, including Prime Minister Hassam Diab, will remain in power during the political transition. Under Lebanon’s constitution, the president, Michel Aoun, in consultation with parliament can appoint a new cabinet without new elections; however, Aoun has remained silent on the next course of action thus far.

The cost of the property damage, which alone is estimated to be approximately 15 billion USD, roughly a quarter of the country’s GDP, will be an unsustainable burden for a country already on the verge of economic collapse. The ongoing economic crisis has already caused a significant deterioration of the quality of life in the country and was the main trigger of the protests that led to the fall of the previous government, known as the October 17 Revolution. The country now faces another crisis with the demonstrators demanding the complete overhaul of the political system, which is accused of deep-rooted corruption and clientelism that ultimately led to the incident, a collapsing economy, and the fears of sectarian violence akin to the civil war years should the situation continue.

While the initial reaction to the estimated 1.2 kilotons explosion was grief, mourning and unity, those feelings quickly turned to anger. On Sunday, the public took to the streets of Beirut, vowing to rally until the government stepped down and took responsibility for the mismanagement that led to 2,750 metric tons of ammonium nitrate to remain unsafely stored in the port for years.

The accident, which cost the lives of hundreds of people, ultimately embodied the issues of corruption and inefficiency that are endemic in the Lebanese political elite and the government’s inability to protect and provide for its people. It also occurred against the backdrop of an ongoing economic, financial and monetary crisis, combined with the socio-economic costs of the Covid-19 pandemic, both of which will have a serious impact on the process of recovery.

All attempts to appease the crowds, including the promise of an early election and the resignation of a number of key ministries, were insufficient, leading the Prime Minister to announce his, and his cabinet’s, resignation on Monday, 10 August. However, due to the complexity of the Lebanese political system, the abdication of the executive branch does not equate to meaningful change or reform, as the Constitution mandates the position to be filled by a member of the same religious group, a Sunni Muslim.

Lebanon’s confessional system was designed to keep the peace after the 15-year long war but has instead created a political environment dominated by large religious dynasties and crippled by corruption and clientelism. The permanent roles assigned to the different religious factions also fosters a narrative of reciprocal finger-pointing, which ultimately hinders the implementation of reforms, as evidenced by the government’s poor handling of the economic crisis.

Last year’s protests, known as the October 17 Revolution, were triggered by the same socio-economic grievances and endemic corruption present within the country’s political elite that continue. The unrest then led to the ousting of Prime Minister Saad Hari. However, little has changed, the country is now in its worst economic crisis since the 1975-1990 civil war. More than one million people now live below the poverty line, with roughly three-quarters of the country’s population in need of aid. The country’s unemployment is also at 33 percent. These issues have united those across the country, normally divided by sectarian and religious lines, in anger against the ruling class.

Another factor hampering Lebanon is, while many governments have pledged aid and support in the short term, it looks unlikely that the country will receive longer-term aid for the time being. The perceived governmental corruption and the constant presence of Hezbollah make western governments and Arab neighbours reluctant to invest. The same groups who have pledged aid, including an online donor summit that has raised nearly 300 million USD, have also called for reforms to be made.

This poor economic situation and high unemployment are leading to many young Lebanese to look to leave the country. Most have the skills and the education to find work elsewhere, normally in Europe or the Gulf states. The country is at risk of human capital flight, or “brain drain”; whoever ends up taking overrunning the country may have their efforts to rebuild hampered by the lack of an educated middle class.

What Next? The Danger of a Political Void

While the resignation of the cabinet and the prime minister has the potential to produce an initial pacification, they are also unlikely to completely stop the civil unrest, particularly as Diab will effectively remain in his role as a caretaker until a new government is formed, a process that generally takes a month. Moreover, fearing the outcome will be the same as the October 17 Revolution, the demonstrators are increasingly demanding a complete overhaul of the political system, one that will produce meaningful political and economic change.

Reforming the country’s confessional system would, however, require a constitutional change. The current power-sharing political structure was specifically designed to balance the country’s numerous religious and sectarian divisions after the civil war. As such, it is designed to prevent it from being easily changed, particularly by one religious group attempting to gain leverage over the others, which would increase the risk of another civil war. While the 1989 Taif Agreement has helped avoid further years of civil unrest, it has produced the current paralysed political situation and, finally, resulted in the current economic situation.

However, despite the problems with the status quo, any reform process would likely create a power vacuum and remove the legal barriers regulating the power-sharing system, potentially reigniting longstanding historical and religious rivalries. Moreover, a complete overhaul of the government structure is no guarantee of a solution to the economic issues fuelling public anger. A period of political transition will make it difficult to implement large-scale economic reforms and handle the reconstruction process.

The connection of the different groups to regional powers, such as Iran and Saudi Arabia, together with the presence of Hezbollah, greatly increases the likelihood of conflict and rivalry should one group perceive it is losing out at the expense of another. Indeed, the involvement of Hezbollah also adds a dangerous factor into an already volatile situation. The group, which is both a legitimate political party with a powerful say in governance and possesses a strong militia, some say is a more powerful military than the Lebanese Army.

However, the anger on the street, directed at the ruling class, is united. Lebanese, regardless of their background, whether they be Sunni, Shia or Christian, are angry. This has created a situation of paralysis, the government cannot reform due to resistance of the ruling elite, but failure to reform results in further protests. With the economy close to defaulting, Beirut in a state of destruction and the political class stuck without options to effectively move forward, the future remains unclear, and dark.

Hope in the darkness?

Despite the issues facing Lebanon, there is hope that a disaster of this magnitude can be used as a catalyst for positive change. Foreign politicians have been quick to offer aid and to support the reconstruction and recovery process. While these groups have expressed a degree of mistrust regarding the government’s handling of the funds, largely due to the risk of graft and mismanagement, the situation is now so dire that international support is required. This has given countries like France and the United States a position of power to demand reforms in return for aid. Whether any foreign supported government would be trusted by those in the country is unclear but would be a positive step.

A new government would also need to be released from the constraints of parliament, to avoid the sectarian and religious disputes that would render their position useless. However, the sectarian leaders will see any reform to the government as a threat; what if the proposed reform favoured Shias over Sunnis or Christians over Shias? Leaders of these groups see the need for reform, many even publicly backing it, but divisions run deep, and none will want to be the perceived “loser” of a new Lebanon.

None more so than Hezbollah, backed by Iran, the group enjoy incredible power in the country and will be reluctant to see their position made redundant. However, the group will also see that the situation is so dire, they do not want the whole country to collapse, and the Lebanese do not want another civil war. Any new Lebanon will need to factor in the group, and their power, too much change may cause a conflict, not enough may do little to impact the status quo.

The next steps remain unclear, the previous government was only in power for 8 months, the government before that 10. It would also take at least a year to organise elections. As such, the most likely course of action is for the president to appoint a new prime minister and cabinet. However, this is far from straight forward, the country’s confessional system requires another Sunni Muslim to take up the role of prime minister. Despite the state of emergency and powers vested in the army, reforming the current system’s balance creates the risk of conflict should certain groups believe they are losing out.

However, the situation is now so dire that action is needed. Reform is now a necessity, with the only other option being a revolution, and possibly another sectarian conflict akin to the civil war that gripped the country between 1975 and 1990. Protesters are no longer demonstrating against the poor financial situation and a single government’s incompetence; they are now angry at a flawed political system. Crowds chanted “free us from Hezbollah” when Macron toured the destruction. The group are unlikely to want to see their position challenged, that resistance could prove to be the spark needed to escalate the unrest to a full-blown conflict.

!WE ARE HIRING! Due to our continued growth Solace Global Risk is recruiting for Response Operations Managers to j… https://t.co/4sL0IZBjCb

With years of working closely with HNWs, we have created a one-stop-shop guide detailing everything you need to kno… https://t.co/gfuhGxdqVJ

At Solace Global our #traveltracking platform goes above and beyond. From innovative ideas to utilising customer fe… https://t.co/c4KFYT6G7m

!WE ARE HIRING! Solace Global Risk are recruiting for a Software Developer to join our team in Poole, Dorset. For… https://t.co/uItqEMGRoM

On 6th September a spate of #stabbings took place at four locations across #Birmingham City Centre, killing at leas… https://t.co/keayEpoCOu

We're Hiring! Solace Global are looking for a Part-Time Digital Marketing Executive to join the team. For more in… https://t.co/JtM6tsm2x5

The #US continues to be the worst affected nation as #COVID19 cases surpasses 6.29 million with surges being report… https://t.co/xK28qoyug8

RT @ITIJEditor: I explore what #travelriskmanagement specialists can offer corporates when it comes to protecting globally mobile workforce…

Each week our analysts produce an overview of the main #risk related stories that have happened globally. We highli… https://t.co/nSc8bEZcEW

On 4 August, an #explosion devastated #Beirut, killing at least 220 people & displacing around 300k. After an initi… https://t.co/w7feXevobd