An Italian national was kidnapped on 20 November after armed bandits stormed the offices of an International Non-Governmental Organisations (NGO) in Chakama (Kilifi country), south-east Kenya. While the motives behind the attack are yet to be established, local media reports suggest that it was a pre-meditated and coordinated event where the assailants had specifically targeted the foreign aid worker. Travellers in south-east Kenya should consider implementing additional journey management and security precautions for travel to rural areas and only share details of planned itineraries and accommodation with trusted contacts. 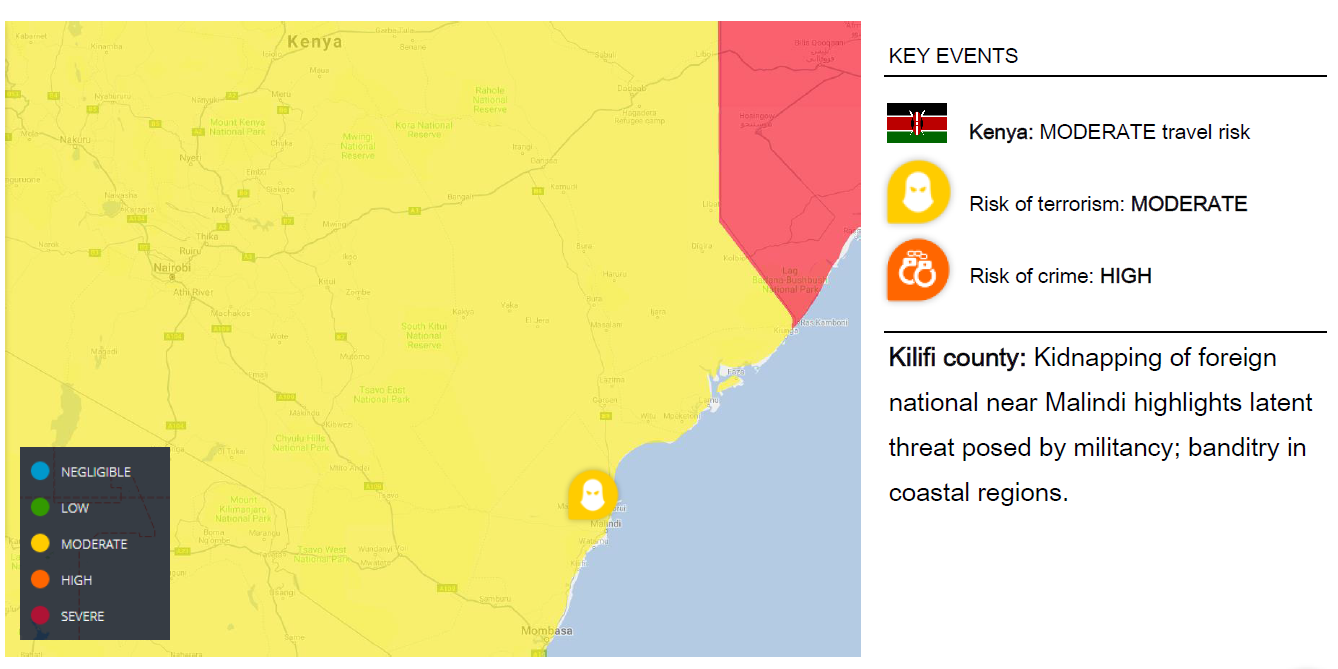 An Italian volunteer aid worker, who was supporting an NGO run schools project, was kidnapped in Chakama (Kilifi county), 37 miles (60 km) west of Malindi, on 20 November. Unknown gunmen entered the village, firing indiscriminately at residents before taking the aid worker. While the identities of the assailant and the motives for the attack are yet to be established, Kenyan police are treating the incident as a terror attack. This is the first kidnapping of a foreign national on the Kenyan east coast since security forces increased protective measures throughout the region after a spate of kidnappings in 2011-12.

Local reports claimed that up to six attackers entered the village with assault rifles at approximately 19.30 (local time), stormed a guesthouse being used by an Italian NGO and demanded to know where the ‘visitor’ was. Having located the foreign aid worker, they forcefully absconded with the Italian national heading north towards the Galana River. Five residents, including three children, were shot and injured as the gunmen fled. Several local eye witness accounts claim that the assailants were speaking with a Somali dialect; however, this remains unverified.

Travellers in Kenya’s eastern border region should maintain situational awareness and report any suspicious behaviour to the local authorities. In the event that a further security incident does occur within your locality, return to a safe location as quickly as possible and minimise movement in the affected area.

Between 2011 and 2012, eastern Kenya experienced an escalation in kidnappings of foreign nationals. These were both criminally and religiously motivated. Since 2012, security and intelligence networks has improved in major urban areas, reducing the risk to travellers.  Rural areas; however, remain increasingly difficult to police and therefore vulnerable to incursions by criminal and Islamist groups.

Eastern Kenya has long experienced religious, economic and political marginalisation from the capital Nairobi, driving sympathies and in some instances recruitment for extremist groups such as Al Shabab and the Islamic State (IS). The region is predominantly inhabited by ethnic Somalis and part of what they consider, Greater Somalia. The porous border region has been a long-term source of instability with both armed smugglers and militants able to cross freely from Somalia into the eastern coastal regions of Kenya. While it is uncommon for Al Shabab militants to have a presence as far south as Kilifi county, they maintain a consistent presence in the border region between Kenya and Somalia, regularly launching attacks in Lamu and Garissa counties. In 2012, militants associated with Al Shabab kidnapped 4 foreign aid workers and killed their driver in Dadaab (Garissa country).

While the motivation behind the kidnapping is currently unknown, the incident highlights the continued threat to foreign visitors operating outside major urban centres in eastern Kenya. Travellers with a longer-term presence in a rural area will become increasingly susceptible to kidnap over time as both criminal and militant groups are able to establish a pattern of movements and identify periods of vulnerability. In the case of the Italian aid worker, local reports would suggest that the abduction was pre-meditated, and the assailants had been monitoring her movements prior to the attack.  While it remains unlikely that there will be a return to the rate of kidnappings of foreign nationals experienced in 2011-12 due to the improvements in security measures, the recent incident highlights a continued threat to travellers and the need to implement precautions prior, and during travel.