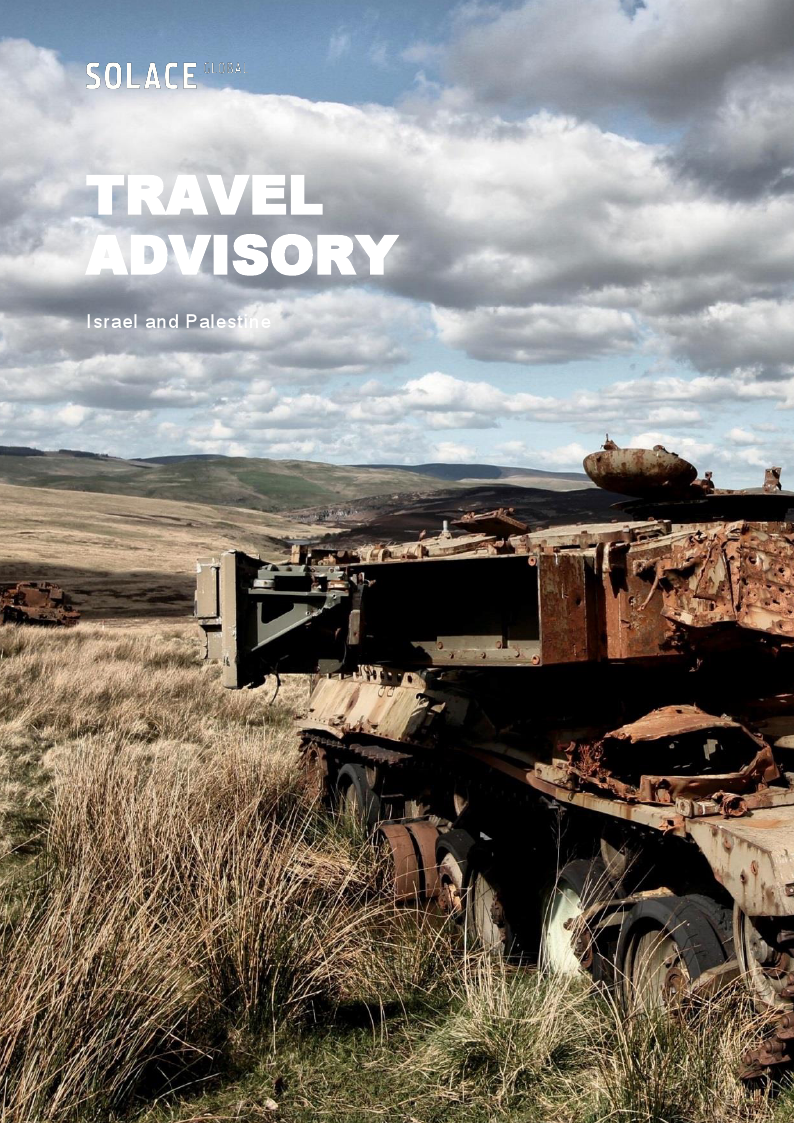 Early on Monday, 25 March, a rocket struck the living quarters of a residential house in Mishmeret; hitting a home and injuring seven people. The rocket, understood to be a J-80 rocket, is believed to have been fired at its maximum possible range from an area near Rafah in the Gaza strip; evading Israel’s Iron Dome air-defence system. Israel has responded to the strike as in retaliation to an attack; it conducted airstrikes on believed Hamas-controlled territories in Gaza and mobilized ground forces along the border. Reportedly several buildings associated with Hamas were destroyed in the process. 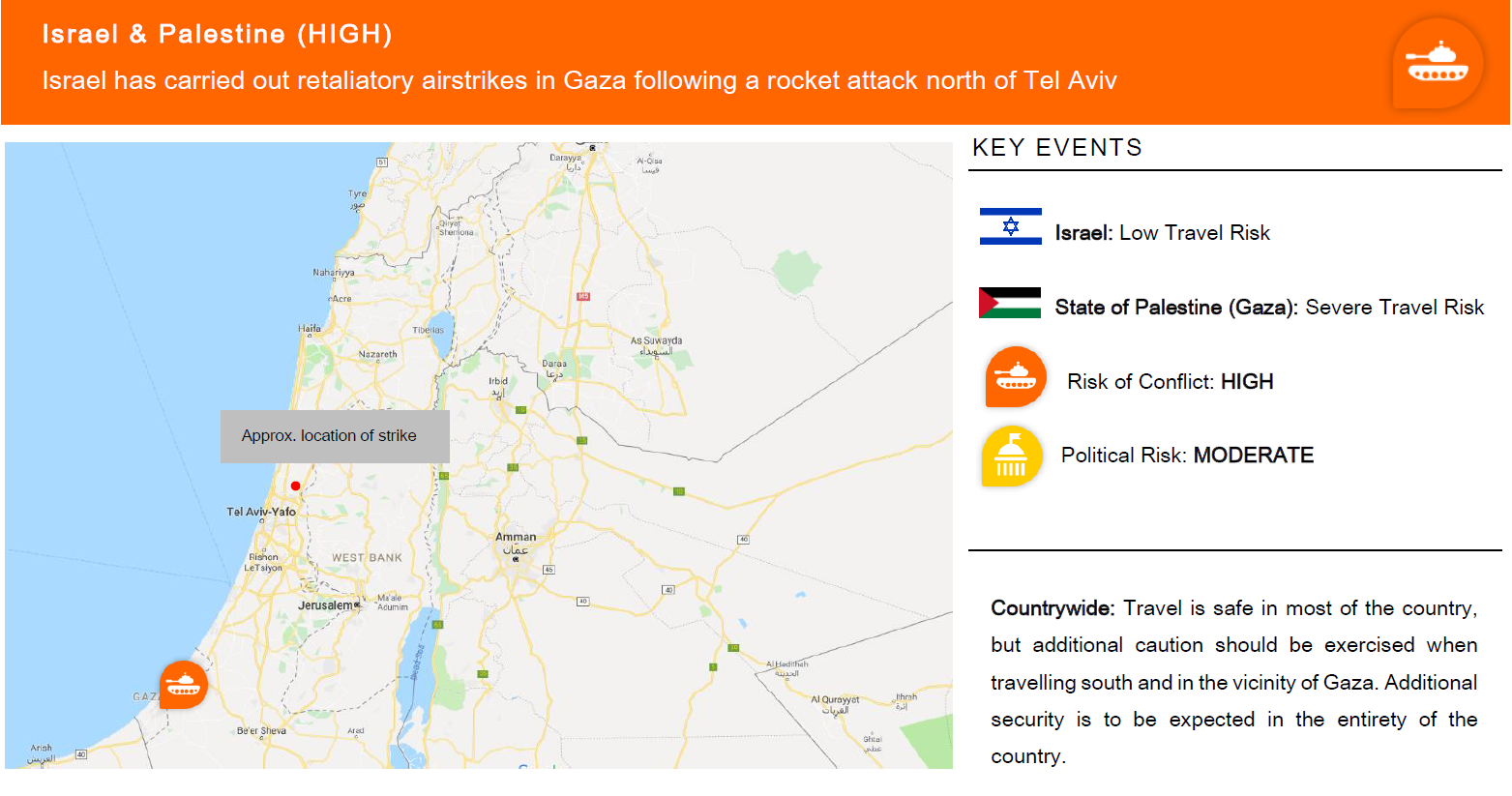 Early morning on Monday 25 March a J-80 rocket hit a house in Mishmeret, a residential moshav (town) in central Israel, injuring seven people, including two children and one infant, as well as causing damage in the immediate vicinity of the blast with a fragment colliding against a gas tank. The rocket was launched from Rafah in the Gaza strip and was reportedly the farthest-reaching rocket since the 2014 conflict in Gaza, covering a distance of approximately 120 km. Although no organisation claimed immediate responsibility, the Israeli Defence Forces (IDF) condemned the Hamas militant group and initiated retaliatory airstrikes in several Hamas-ruled areas.

The unexpectedly successful long-range rocket launch from Gaza triggered a back and forth in retaliatory attacks lasting until early Tuesday morning, with lesser strikes continuing Tuesday evening into Wednesday morning. The Israeli bombardment that shortly followed the initial rocket strike was reportedly directed at Hamas positions and infrastructure in the Gaza Strip, hitting mainly military and naval bases, and, allegedly, the HQ of Hamas’ intelligence. The airstrikes also targeted a building in the centre of Gaza City, housing al-Multazem Insurance Company, a business with alleged ties to Hamas. The IDF also closed the Gaza border crossing Sharon and Emek Hefer and deployed two additional brigades and infantry units in the area surrounding Gaza. Seven Palestinians were reportedly wounded in the attack. Gaza responded to by firing a barrage of rockets during the night, most of which were successfully intercepted by the Israeli Iron Dome missile defence system or hit empty land.

While Hamas later declared that an unofficial ceasefire mediated by Egypt was reached on Monday, the two sides have continued to exchange fire; with little or no casualties being reported. All rockets directed at Israel have been successfully intercepted by deployed missile defence systems with the biggest concern now being localised violence along the Israeli-Gaza border fence; especially in the run-up to the one-year anniversary of the 2018 Gaza border protests. The protests, dubbed the Great March of Return, have resulted in 183 Palestinian deaths and over 9,000 injuries.

The long-range rocket strike and its successful execution raised questions regarding the effectiveness of the defence measures in place in Israel, which are normally considered to be highly capable, particularly as provocations were expected to happen from Hamas in the next two weeks. In fact, despite the rocket causing alarms to go off in Sharon and Emek Hefer, the Israeli air defence system, the “Iron Dome”, was not activated. The mobile system was designed to protect only an area of approximately 155 square km against missiles launched from a range between 40 and 70 km, which means that it needs to be deployed in response to accurate operational threat assessments. Moreover, its effectiveness is reduced by the prohibitive costs associated with its deployment, making it highly unlikely for it to be activated when no clear danger is expected.

Confrontations between Hamas and Israel occurs periodically, with Tel Aviv historically waging three major offensives against Gaza since it fell under Hamas control in 2007, last of which took place in 2014. In fact, disruptive actions and provocations from Hamas were expected by Israeli intelligence ahead of the upcoming elections, as shown on 14 March, when Gaza fired two rockets above Tel Aviv. Overall, Israeli air strikes as a sign of retaliation to rockets launched from Gaza are considered relatively frequent and generally avoid targeting Gaza city or residential areas, but the decision to deploy additional ground forces on the borders has considered a significant sign of escalation. The Israeli Defence Forces seem to be preparing to face demonstrations during the aforementioned one-year anniversary of the start of the Great March of Return protests in Palestine that caused turmoil for the majority of 2018.

The timing of the confrontation is also greatly significant, as President Netanyahu was in Washington DC during the attack for a series of meetings aimed at enhancing bilateral ties and boosting his credibility as a leader; which has suffered a blow with the recent public corruption scandals. The elections are set to be held in Israel on 9 April and President Netanyahu, in power since 2009, is facing decreasing popularity coupled with accusations of not being resolute enough in addressing the terrorist and insurgent threats. On Monday, the same day of the attack, President Donald Trump reciprocated the political support offered by Jerusalem by officially proclaiming American recognition of Israeli sovereignty over the Golan Heights, contested territory that it seized from Syria in during the Six-Day war of 1967. This declaration softens the blow for Netanyahu’s campaign, heavily focused on security priorities and adopting a hard line against Palestinian militants, which makes this successful attack on a residential area near Tel Aviv politically costly. The visit was cut short in the aftermath of the attack and the President went directly into military consultations upon its return to the country to personally oversee responsive actions.

Moreover, the rocket strike took place on a highly symbolic week, as Saturday 30 March marks the anniversary of the Land Day when in 1976 several Palestinians were killed by Israeli forces for protesting the occupations of land that is now considered Israel. In 2018, on the same date, the aforementioned “Great March of Return” began, with protesters demanding to be allowed to return to the territories that the Palestinians were displaced from. The unrest in 2018 was only supposed to last for six weeks but only ended following an Egyptian mediated ceasefire at the end of 2018.