Throughout October 2017, a series of coordinated attacks were carried out against police stations and village elders in the northern Cabo Delgado region of Mozambique, bordering Tanzania. The initial attacks on 05 and 06 October resulted in the deaths of two police officers and 14 attackers, with the majority of those occurring during the police and army counter-attack on 06 October. On 21 October, government troops were attacked in Maluku. Casualty reports from this clash have not been released, and the village remains abandoned after residents fled the fighting. During the night of 22 October, a further attack was launched against the village of Columbe, near a foreign-owned oil installation. The oil facility’s staff were evacuated following the attack, and casualty reports remain unavailable. 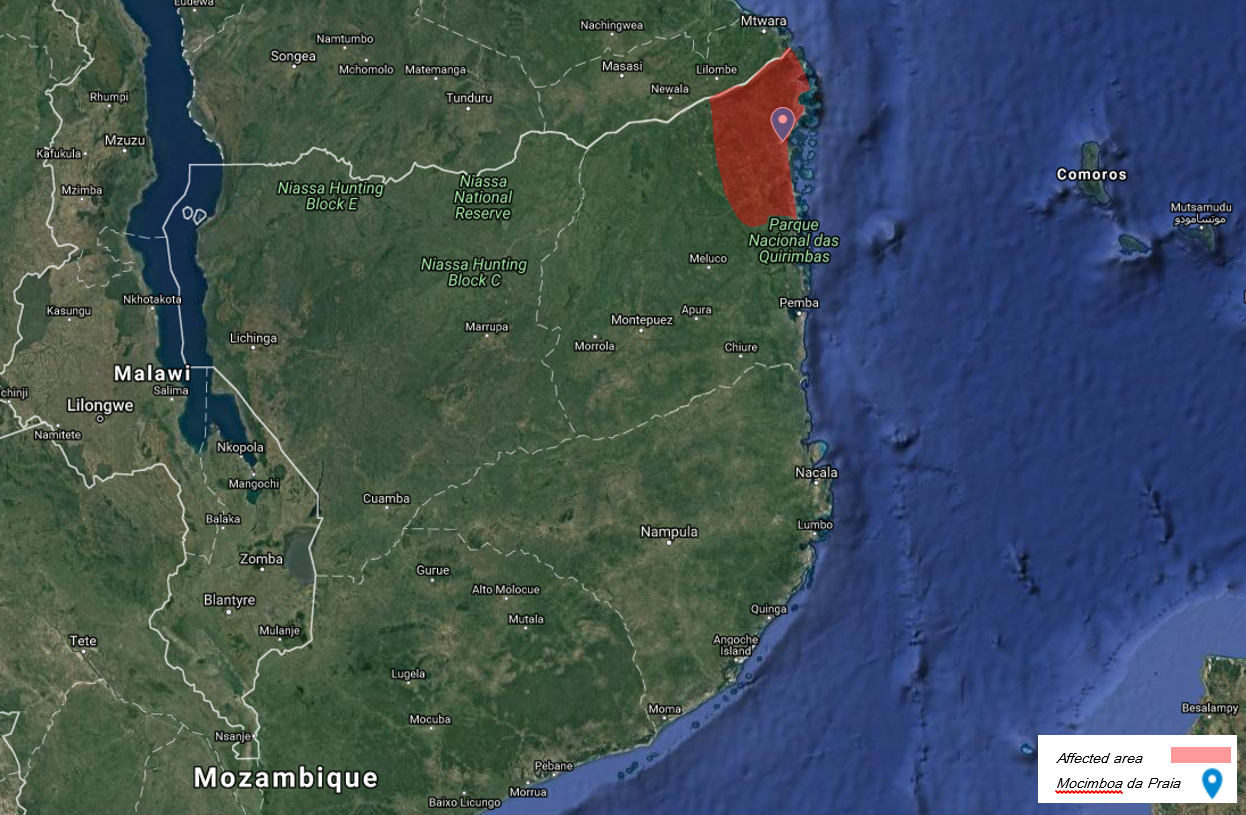 Terrorism:  Throughout October 2017, a series of coordinated attacks were carried out against police stations and village elders in the northern Cabo Delgado region of Mozambique, bordering Tanzania. The initial attacks on 05 and 06 October resulted in the deaths of two police officers and 14 attackers, with the majority of those occurring during the police and army counter-attack on 06 October. On 21 October, government troops were attacked in Maluku. Casualty reports from this clash have not been released, and the village remains abandoned after residents fled the fighting. During the night of 22 October, a further attack was launched against the village of Columbe, near a foreign-owned oil installation. The oil facility’s staff were evacuated following the attack, and casualty reports remain unavailable.

Some local sources reportedly identified the attackers as “Al-Shabaab”, however this local cell is not known to have links to the Somali group with the same name. All those arrested in relation to the attacks have, so far, been identified as local citizens.

Mozambique has had ongoing issues with insurgencies and terrorism, partly as a legacy of the wars in the region in the late-20th century when independence was gained from European powers. Presently, the government has agreed a truce with the armed wing of the opposition RENAMO party since 2012, although intermittent acts of violence have still occurred. Local media suggested that these attacks were motivated by militant Islam, rather than the more typical political grievances. The October 2017 attacks are significant as, until recently, Islamist ideology has not been prevalent among armed groups in the country.

Local authorities have tightly controlled the release of information concerning these attacks, however some inferences can be made concerning the causes and motives behind them. The Islamic faith has been intermittently suppressed by the Mozambique government. This occurred most overtly during the period the regime identified as communist in its broader foreign policy, however some of these behaviours have persisted despite the ideology being formally abandoned. Between 17 and 30 per cent of the population adhere to Islam, and these are grouped primarily in the north of the country.

Local reporting suggests that in 2014, a local sect took the title “al-Shabaab” (“the Youth”) and took control of two mosques in the Mocimboa da Praia area. Over the 2014-2017 period, their sermons reportedly became progressively more radical, with particular focus against the secular provision of healthcare and education. In this regard, and with their stated desire for the implementation of Sharia (Islamic) law, it could be seen that the group has an ideological core similar to that of Boko Haram in Nigeria. This group is likely to have developed from imported Wahabbist Islam, with an emphasis on a strict literal interpretation of the faith. Such sects are widely at odds with the majority Sufi Islamic population in northern Mozambique.

Further regional tensions have been created since the discovery of oil and gas fields in the region. At present, little of the wealth generated by the extraction of these materials has benefitted the local population; the vast majority of staff working in the extractives industry are foreign expatriates. Considering the widespread poverty in the region, this contrast of wealth has acted to increase low level discontent.

Considering the combination of these factors; the emergence of an anti-state and anti-western Islamist group, and low level discontent; foreign workers and travellers in the affected area have potential to be targeted if the insurgency continues to develop.

Expatriate personnel and local employees of foreign-owned businesses are advised to review their personal security measures. Efforts should be made to maintain a low profile and avoid setting patterns where possible. Unaccompanied travel is advised against, and vehicles should be unbranded and low-profile where possible. Fixed facilities should maintain an effective surveillance effort in order to detect possible reconnaissance and deter attack. Physical security measures should be reviewed in light of the attack in Mocimboa da Praia, which involved up to 30 gunmen equipped with automatic small arms. Evacuation plans or provision of saferooms should be assessed and rehearsed in case of attack, along with communication systems with which to raise the alarm and request assistance.

Travellers visiting Mozambique are advised to employ the minimum of a locally vetted security driver if travelling around the capital, or major urban areas. If travel into rural areas is planned, travellers should strongly consider the employment of close protection officers. In all cases, the use of a traveller tracking app with the ability to display an intelligence feed will assist employers to implement effective duty of care, and also permit the traveller to remain up to date with pertinent security updates. GPS trackers may be required in rural areas.