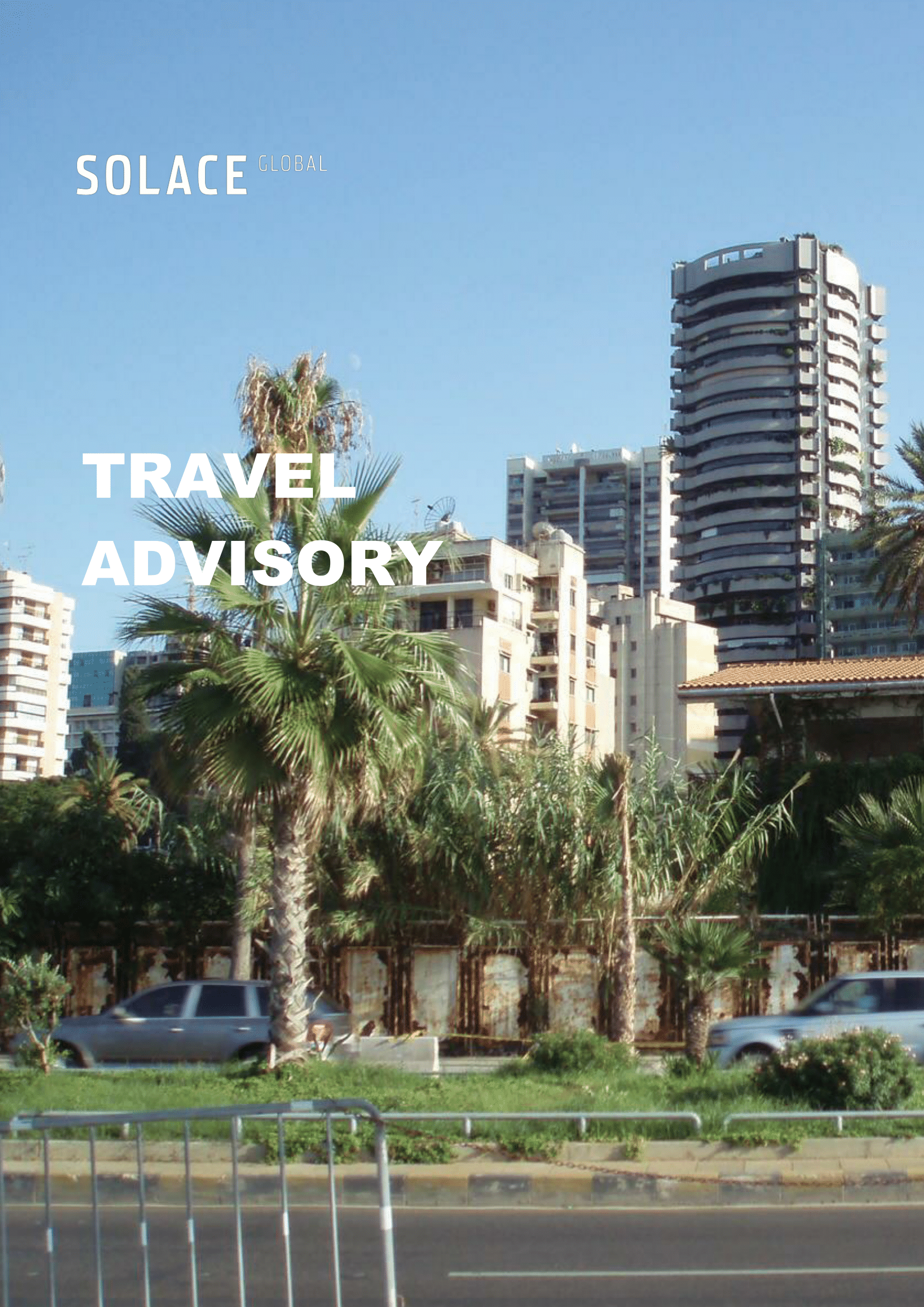 Lebanon will next week commemorate the anniversaries of the assassination of two key figures, former Hezbollah commander Imad Moughniyeh and former prime minister Rafik Hariri, on 12 and 14 February respectively. Commemoration events will take place amid high security, especially on 14 February, Rafik Hariri Memorial Day, which is also a public holiday in Lebanon.

Security Risk: Lebanon will next week be commemorating two major anniversaries; the 11th anniversary of the killing of senior Hezbollah commander Imad Moughniyeh on 12 February, and the 14th anniversary of the assassination of former Prime Minister Rafik Hariri on 14 February. The two dates, which traditionally see commemorative events in southern and Downtown Beirut, respectively, are taking place in a tense political and regional climate. Despite the announcement on 31 January of the formation of a unity government nearly nine months after the parliamentary election of 6 May 2018, political and sectarian tensions remain elevated, and the two dates remain cause of concern given the highly sensitive nature of the events, and the potential for them to re-ignite sectarian violence in the event of a major security incident on either day.

Imad Moughniyeh, a senior commander with political and militant Shi’a group Hezbollah, was killed in a bomb explosion in Damascus, Syria, on 12 February 2008. Mughniyeh is believed to have been implicated in some of the major attacks against Israeli, US and French nationals, including the April 1983 bombing at the US embassy in Beirut, the October 1983 truck bombings against US and French service members of the Multinational Force in Lebanon in Beirut, the 1985 hijacking of the TWA flight 847 from Athens to Rome, the 1992 and 1994 bombings at the Israeli embassy and the AMIA building in Buenos Aires, the 1994 killing of the CIA’s Lebanon chief William F. Buckley, and the 1996 bombing at the Khobar Towers in Saudi Arabia. Following the US invasion of Iraq, Mughniyeh was also involved in the arming and training of Shi’a militias that attacked US troops. Hezbollah has always described the assassination as a joint Mossad-CIA operation.

Former prime minister Rafik Hariri, father of current premier Saad Hariri, was killed in a truck bomb attack that targeted his convoy near Saint-Georges Hotel on 14 January 2005. Four Hezbollah members are suspected of planning and executing the attack, which also killed 21 people and injured another 200. The assassination of Hariri, who opposed Syria’s control over Lebanon, left the country divided between the Saudi-backed March 14 coalition and the pro-Syrian Iranian-backed March 8 coalition, and led to the withdrawal of Syrian troops from Lebanon. The anniversary of Hariri’s death is now marked as Rafik Hariri Memorial Day, which is a public holiday in Lebanon.

The two highly emotive issues see annual commemorative events across Beirut. Rallies to mark the death of Imad Mughniyeh are held in Hezbollah bastions in southern Beirut – which should remain strictly out of bounds for travellers. Security will be heightened on the day in central Beirut and in areas leading to southern Beirut, especially if prominent Iranian figures attend the ceremony. Qasem Soleimani, the Quds Brigade of the Islamic Revolutionary Guard Corps, has attended commemoration events in the past.

Annual commemoration ceremonies for Rafik Hariri traditionally take place at Martyrs Square, at the site of Hariri’s grave, amid a high security presence. Members and supporters of the March 14 coalition and religious leaders take part in prayers and ceremonies, that in past years has seen Hariri’s Future Movement hold a commemorative event at BIEL (Beirut International Exhibition & Leisure Center). The commemorations remain a highly sensitive event, and personnel are advised to avoid travel to Downtown Beirut on the day wherever possible.

On 31 January, Lebanese authorities announced the formation of a new government of national unity, led by Saad al-Hariri, after a nearly nine-month deadlock due to various sectarian factions vying for key positions in the new cabinet and in particular the representation of eight independent pro-Hezbollah Sunni MPs. They were eventually awarded one position in the cabinet, while Hezbollah, which made significant gains in the parliamentary elections, took two seats, including the key Public Health portfolio.

While the international community has welcomed the formation of a new government, the US administration has expressed concern over Hezbollah, which is under US sanctions and is designated a Foreign Terrorist Organisation by the US, maintaining government positions. Washington has also called on the new government to ensure that Hezbollah is not supported by the ministries’ resources. While Hariri has sought to reassure the US, political and sectarian tensions remain high, and longstanding divisions are likely to emerge rapidly. A first test will be the drafting of a government policy statement, to be debated in Parliament ahead of a vote of confidence. While Hariri said it would be ready within days, the statement has for years been a source of tensions as it refers to the right of Hezbollah to keep its weapons. Saad Hariri is determined to make the recovery of Lebanon’s economy a priority, but divisions over key issues, including foreign policies in the region, and in particular Syria, could easily result in political paralysis.

Personnel operating in Lebanon or planning to travel to Beirut over the next week should be prepared for an increased, and visible, security presence across the capital, including at Beirut-Rafik Hariri International Airport.

On 13 February, and as a general rule, travellers must stay away from the city’s southern suburbs, Hezbollah’s stronghold, that are located south of the sports stadium and the Adnan Al Hakim road to the Beirut-Saida (Sidon) road and that include the neighbourhoods of Bir Hassan, Ghobeiry, Chuya, Haret Hreik, Burj Al Brajneh, Mraije, Er Rouais and Laylaki. The “high-risk” zone, however, excludes the main airport highway, the area between the coast and the Beirut-Saida road, and the area between the airport highway and the coast south of Abbas El Mousawi Road. Anti- and pro-Hezbollah rallies are also possible on the day in central Beirut. Increased rhetoric against Israel and the US is also likely on the day, and vigilance should be exercised in the vicinity of the US Embassy.

On 14 February, vigilance should be exercised near the Grand Serail (government palace), the Corniche and wider Downtown area, Iranian representations and Western missions. Of note, French President Emmanuel Macron was scheduled to visit Beirut between 11-14 February – in which case he will likely attend the commemorative events on 14 February. Personnel should minimise time spent and be vigilant in crowded public spaces and near government or religious buildings. Parking and traffic restrictions should be expected ahead of 14 February and on the day in the Downtown area. While announcements about affected areas are yet to be made, last year, parking restrictions were in place in the Downtown area, Mina al-Hosn, Ain al-Mreisseh, and the Corniche/coastal area.

Personnel should avoid, or at least restrict movement to those areas to a minimum on 14 February due to the high risk of disruption to travel plans and the potential for the events to be targeted in an attack. 14 February is also a national holiday, and personnel should plan accordingly, especially if administrative support or services are expected to be required next week.

Solace Global Intelligence brings to you our 2022 Global Outlook. Our forthcoming series looks at what risks lie in… https://t.co/fHHxAfxYHH