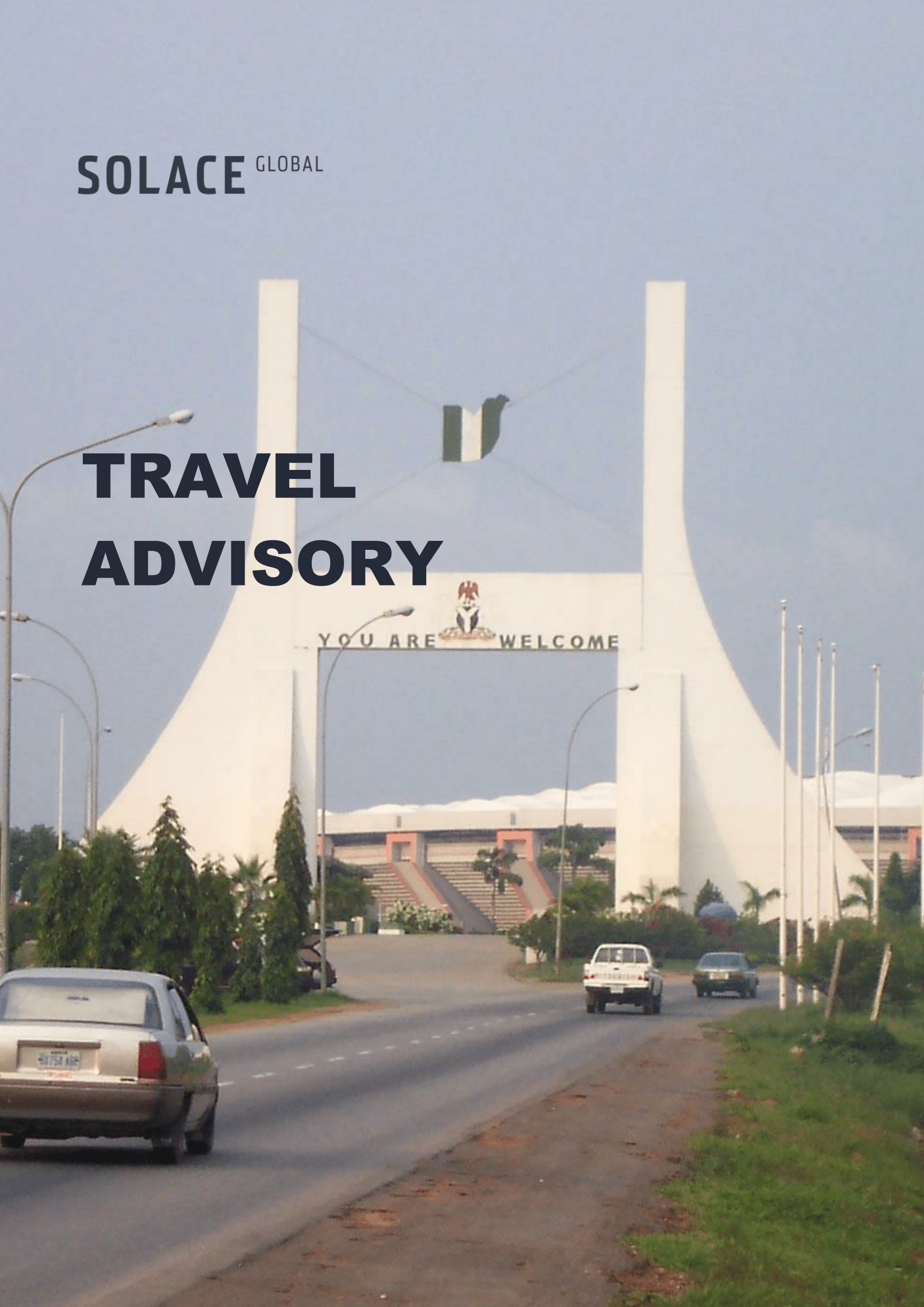 The US Embassy in Abuja has alerted to an increased risk of attacks ahead of the presidential and legislative elections scheduled for 16 February, which will be followed by governorship and state assembly elections on 2 March. A number of security challenges heighten the risk of violence ahead and after the elections. These include a growing terrorist threat in the northeast, collusion between political groups or individuals and criminal organisations, ethno-religious and community tensions, notably herder-farmer violence in the Middle Belt, and aggressive political rhetoric. The risk of civil unrest is expected to remain elevated throughout the election period, amid concern over the neutrality of security services in a highly charged political environment.

Political Risk: Nigeria is preparing for a series of key elections, starting with the presidential and National Assembly elections on 16 February, followed by Governorship, State Assembly, and Federal Capital Territory Area Council elections on 2 March. As political tensions continue to mount ahead of next month’s votes, security warnings from both US and Nigerian authorities highlight a number of concerns over an elevated terrorism threat, but also civil unrest, throughout the election period.

On 18 January, the US Embassy in Abuja published a Security Alert warning of an increased threat of attacks in the run-up to the 16 February elections, in particular, that militants were planning to attack Nigerian security and infrastructure as well as markets, hotels and shopping centres. Following the warning, the Nigeria Police Force (NPF) announced that security measures have been implemented across the country to counter all possible threats that could jeopardise the smooth conduct of the elections.

Both the US Embassy and NPF noted an increase in propaganda videos involving Nigeria by Boko Haram and Islamic State’s West Africa (ISWA), a Boko Haram splinter group that emerged in 2016. Boko Haram pledged in a video to attack Abuja before next month’s election, while IS material encouraged supporters to join the organisation or/and conduct attacks and also referred to the situation in the northeast, where the group appears to be increasing its footprint.

Although no specifics have been provided regarding a potentially imminent attack that could target foreign travellers or operations, the warning is significant given recent trends in both Nigeria and the wider region, especially following the 15 January attack against the DusitD2 Hotel complex in Nairobi, claimed by al-Shabaab. While there has not been any recent major attack in Abuja and Lagos, Nigeria’s northeast has witnessed a sharp rise in terrorist activity against military targets in the past few months. In November, more than 100 soldiers were killed in an ISWA attack against a military base in the town of Metele. In December, militants launched a series of attacks that saw ISWA take control of the town of Baga in Borno state and seize a Multinational Joint Task Force (MNJTF) base. Troops recaptured the base earlier this month and also retook control of the Borno town of Rann on 15 January after it was overrun by ISWA a day earlier. Militants also overran two military bases in Gaidam, Yobe state, and Ajiri, Borno state, on 23 and 24 January respectively, and on 27 January, troops killed five militants following a suicide car bomb (SVBIED) attack in the Baga area. Several more attacks, and ISWA claims of responsibility, were reported over the past week in Borno state, raising concerns about the capabilities of those threat groups beyond their core areas of operation, and about the ability of security forces to adequately secure the country ahead and during the elections. According to the Independent National Electoral Commission (INEC), more than 360,000 security personnel are needed to man just polling units across the country during the votes

Besides the threat represented by ISWA and Boko Haram, National Security Adviser (NSA) Babagana Monguno has claimed to have received reports of individuals and groups, including politicians and their sponsors, intent on derailing the electoral process and “plotting to precipitate widespread violence”. This statement echoes one made by Minister of Information and Culture Alhaji Lai Mohammed on 21 January that the federal government had received intelligence that opposition parties had been mobilising “armed bandits” and Boko Haram insurgents “to engage in massive attacks and other acts of violence” in at least 10 of the country’s 36 states in a bid to disrupt the elections.

While this statement has to be taken carefully, parties or individuals’ collusion with armed groups to intimidate populations or make political gains is well documented in Nigeria, and similar reports are likely to emerge ahead of the vote, especially as President Muhammadu Buhari’s All Progressives Congress party (APC) and the opposition People’s Democratic Party (PDP) continue to trade accusations of plotting election fraud and vote buying, which was rife in previous elections. Such provocative rhetoric, however, raises concerns about the risk of political violence before and after the vote, and that such arguments could be used to crack down on opposition leaders. Illustrating those concerns, the PDP stopped its campaign last week in protest of a controversial decision by President Buhari, who is contesting for a second term in office, to suspend the country’s chief justice. Walter Nkanu Samuel Onnoghen was accused of breaching asset-declaration rules, in a case that is widely seen as an effort to weaken Nigeria’s judiciary and influence the election, especially in the event of a disputed vote. While Minister Lai Mohammed has denied that the decision was related to the forthcoming presidential elections, Onnoghen’s suspension is significant as it is the first time a chief justice has been standing trial in Nigeria. The EU, UK and US have criticised Onnoghen’s suspension, with the US and UK warning on 24 January that those who take part in election violence and/or vote rigging will be denied visas. Such occurrences might be difficult to define or monitor, however, and the warning is unlikely to act as a major deterrent, as illustrated by the abduction on 28 January of APC’s Abia State chairman, Chief Donatus Nwankpa, along the Enugu–Port Harcourt Expressway on his way to Aba in preparation for Buhari’s visit. The APC have denounced an attempt to prevent the organisation of political rallies.

Personnel operating or planning to travel to Nigeria in the next two weeks should be aware of a heightened risk of civil unrest in a country that has a violent election history – more than 100 people were killed during and after the last elections in 2015. Terrorist attacks are expected to increase in the northeast to put pressure on already stretched security forces ahead of the elections, but also attempts to attack those and other targets outside of the region, including in Abuja and Lagos. A deteriorating security situation in the northeast could also result in elections being postponed in some communities, which would present further challenges for the government and elevate the civil unrest risk in those areas. In the run-up to the vote, aggressive rhetoric between the PDP and the APC, could increase the risk of protests and violence against both parties, especially in the event of intimidation, kidnap, or murder of candidates.

Personnel should exercise vigilance in public places, transport hubs, markets and shopping centres, places of worship, and places frequented by foreigners, including restaurants and international hotels. Caution should also be exercised in the vicinity of government buildings, diplomatic missions, police stations and security forces headquarters and security forces. Personnel should avoid all protest sites due to the high risk of a quick deterioration of violence, and be aware of the risk of demonstrations in the vicinity of party offices. Adequate mitigation measures, including journey management plans, should be in place for all road travel, especially if travelling outside of Abuja and Lagos. All road movement should be reviewed, and potentially temporarily suspended, in the event of protests due to the high risk of disruption to travel plans. Personnel should monitor political and security developments, heed official advice at all times, and be prepared for a heightened police presence and identity checks ahead and during the election period. This can include military checkpoints being erected at short notice, and the imposition of curfews in more volatile areas.