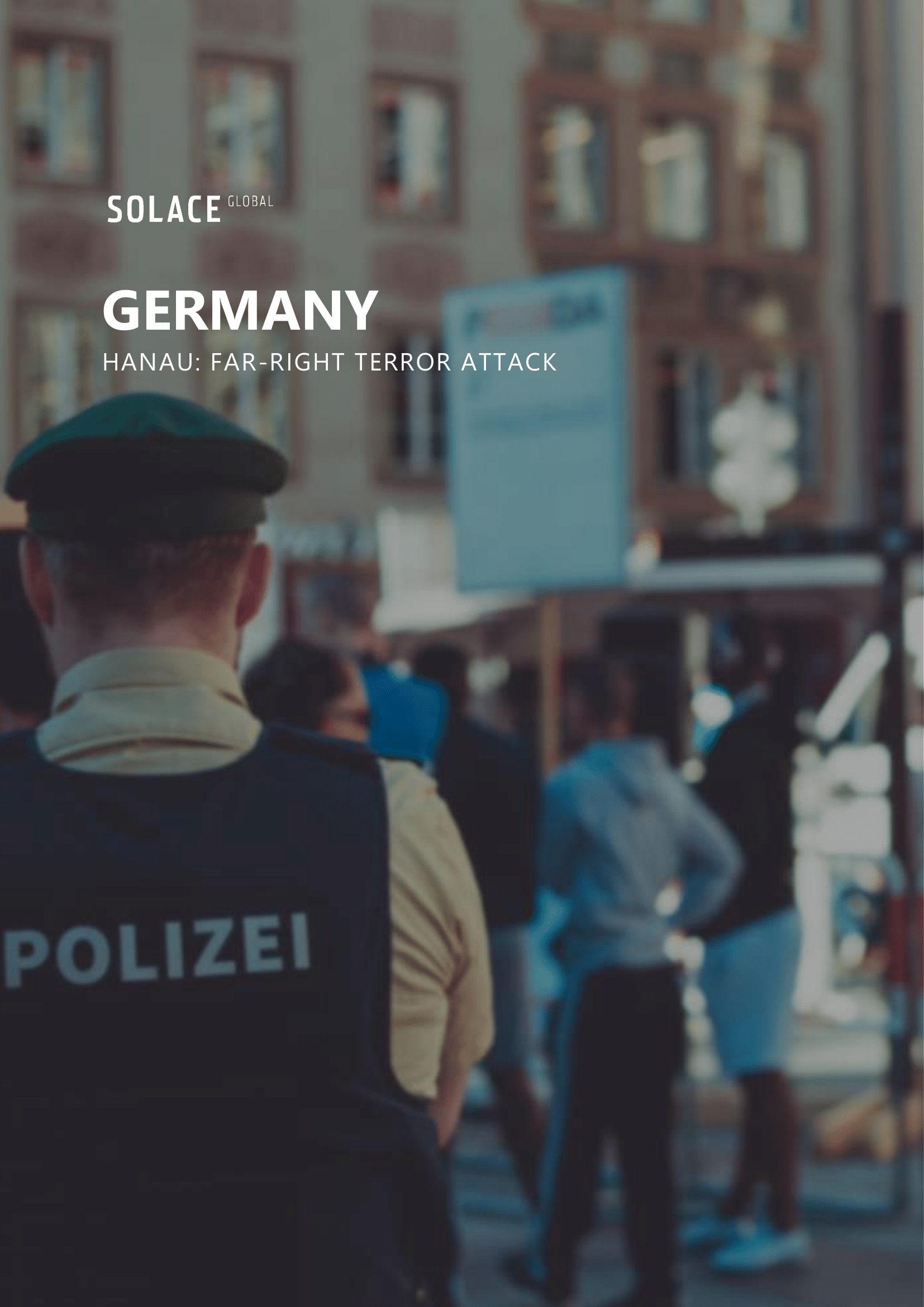 At approximately 22:00 on Wednesday, 19 February, a gunman opened fire on a shisha bar in the commuter town of Hanau, Germany, prior to attacking a second shisha bar before being found dead at his home. At least ten people are reported to have been killed, including, reportedly, the perpetrator’s mother. German federal prosecutors are investigating the incident, with the suspect believed to have held far-right extremist views.

At approximately 22:00 local time on Wednesday, 19 February, a lone gunman launched two deadly attacks targeting Shisha bars in Hanau, Hesse, a commuter town roughly 25 kilometres east of Frankfurt, killing at least nine people and seriously injuring several others. The shootings triggered a large-scale police response operation and a seven-hour manhunt while officers searched for what they initially believed could have been multiple assailants. A single suspect was later identified, found dead at his home, along with the body of a second person.

At the time of writing, the motive for the attacks remains unclear. The shooter is, however, understood to have allegedly left material expressing far-right extremist views, as well as a suicide letter and video claiming responsibility. Additionally, the attack targeted two shisha bars predominantly frequented by Kurdish or Turkish clients, supporting the hypothesis of a targeted attack. As of Thursday, 20 February, federal prosecutors have taken charge of the investigation amid the reports of a possible terrorist motive.

According to local media reports, the attack commenced at around 22:00 local time when eight or nine gunshots were fired at the shisha bar, Midnight, on Heumarkt in the centre of the town. The perpetrator is then believed to have then fled the scene in a vehicle towards Kurt-Schumacher-Platz, where, shortly after the initial attack, he opened fire at a second shisha bar, the Arena Bar & Café, in the western Kesselstadt district. A third incident was reported in the Lamboy district, though this was later denied by police.

The initial death toll in the two attacks was estimated at eight people with several others injured, but this figure was updated to 10 after one of the victims succumbed to their injuries and a person was found dead at the attacker’s home. Hanau’s federal MP, Katja Leikert, called the attack a “horrific scenario” in a tweet in which she offered her “heartfelt condolences” to the victims. Moreover, the town’s mayor, Claus Kaminsky, said it was the “worst evening imaginable”. 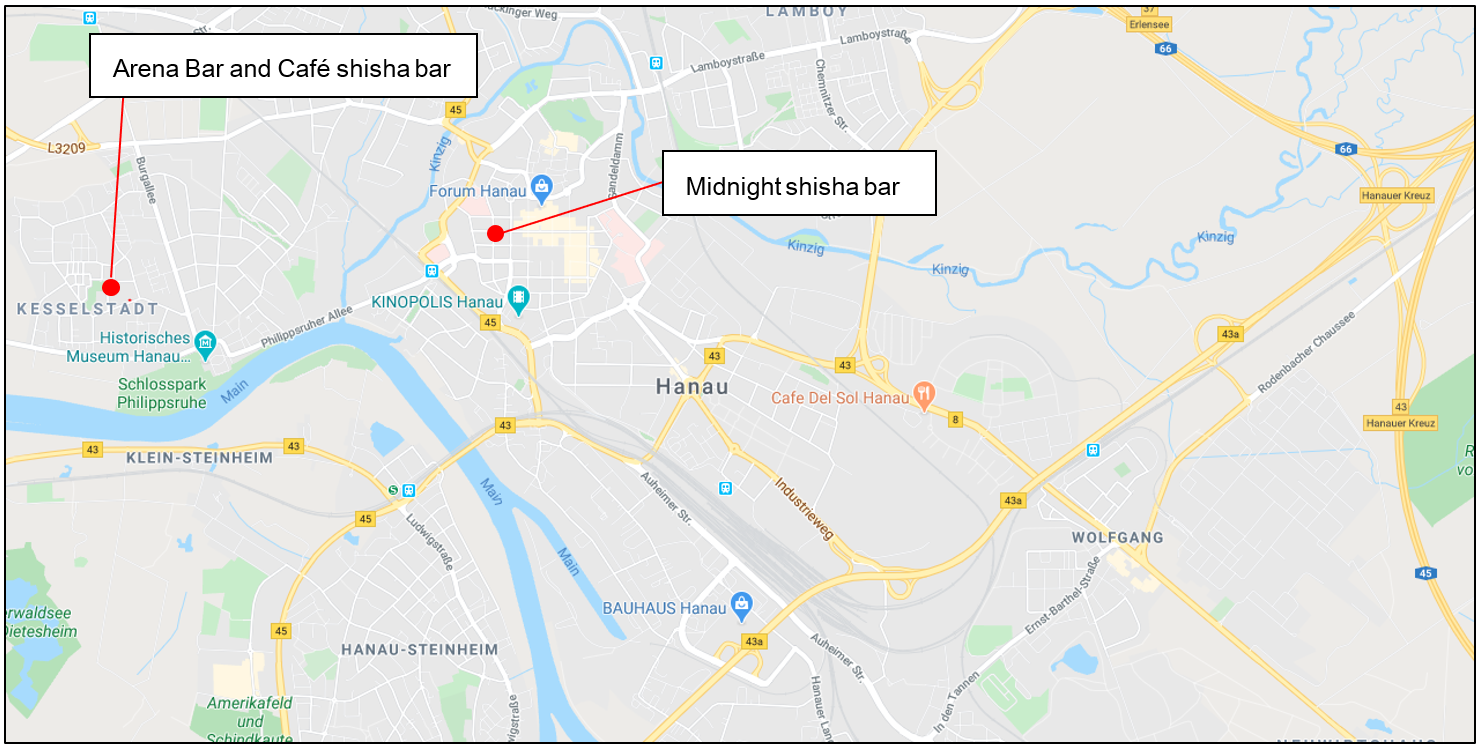 The attacks prompted a heavy armed police response as officers searched for what they thought could have been multiple gunmen. Eye-witness statements allowed officers to trace a vehicle seen fleeing the two scenes to a residential address, which was promptly cordoned off. Upon searching the house, police officers discovered two bodies. One of which is understood to have been the shooter. It remains unclear who the other body is, with the latest media reports suggesting that the shooter may have killed his mother before, during or after the attack.

At the time of writing, there is little information available on the suspect. Media outlets have suggested he was a 43-year-old German citizen who possessed a firearm license for hunting use. The gunman is also believed to have held far-right extremist views and recently released a video pertaining to several far-right conspiracies. Police are said to be examining the video and any others that the suspect may have posted online, with reports stating these could have been uploaded several days before the attack. According to German media, he details a conspiracy theory about child abuse in the United States in said videos, although the authenticity of this cannot be verified at this time.

The shooting comes just days after at least one person was killed and four others were wounded in a shooting on Friday, 15 February, night near the Tempodrom in Berlin. The multi-purpose venue was hosting a Turkish comedy show at the time of the attack.

Despite this, mass shootings are comparatively rare in Germany, largely due to the country having some of the strictest firearms controls in the world. Furthermore, its stringent gun laws have been tightened in recent years, prompted by school shootings in Erfurt in 2002, when 16 people were killed, and in Winnenden in 2009, which left 16 people dead, as well as in response to a mass shooting in Munich in which nine people were killed in 2016.

As such, fully automatic weapons are banned outright, while semi-automatic firearms are banned for anything other than hunting or competitive shooting. Potential firearms owners under the age of 25 must undergo a psychiatric evaluation before being able to purchase a gun. Germany does still, however, have one of the highest rates of gun ownership despite these strict controls, greater than Jamaica, Russia and Brazil, with an estimated 19 firearms per 100,000 people.

The incident is a classic example of a lone-wolf attack, that is often perpetrated by a self-radicalised individual using low-sophistication means to inflict mass casualties. Attacks of this nature are especially difficult to prevent, particularly if the culprit has not come to the attention of security services or openly expressed radical views in the past. In this case, though media sources have indicated that the suspect may have posted far-right views and conspiracy theories online, they could have been overlooked or not deemed serious enough to be investigated further at the time.

Though these motives do remain unconfirmed, the fact that federal prosecutors have taken charge of the investigation suggests that the German authorities are treating the incident as a potential far-right terror attack. This backs up the initial findings communicated by media sources that stated that the attacker left far-right material and a confessional video. It is also understood that police are currently investigating a website that the attacker is thought to have run.

The attack also comes as Germany confronts a dual threat to its security. For years the primary terror threat has been posed by Islamic extremists and international terror groups, though officials are having to address a growing internal far-right threat, which has required a change in counter-terrorism strategy. Authorities have recently estimated that approximately 12,000 people in Germany hold far-right views and could be seen as potentially violent.

Germany is also facing a challenge to is security services, with alleged reports of “infiltration by far-right extremists. On Friday, 14 February, 12 men – one of whom was a police employee – were arrested in Berlin on charges of forming and supporting a far-right terrorist network that was allegedly planning to launch wide-ranging attacks on asylum seekers, Muslims and politicians who support Germany’s refugee policies. Following the arrests earlier in the month, Germany’s justice minister, Christine Lambrecht, posted on twitter calling them a “very worrying right-wing extremist and right-wing terrorist threat in our country” and that “We need to be particularly vigilant and act decisively against this threat”.

Elsewhere in the Frankfurt region, a number of police officers are under investigation on suspicion of taking part in extremist chat forums. The inquiry stemmed from the arrest of a Frankfurt police officer on charges of threatening a lawyer representing victims of far-right extremists.