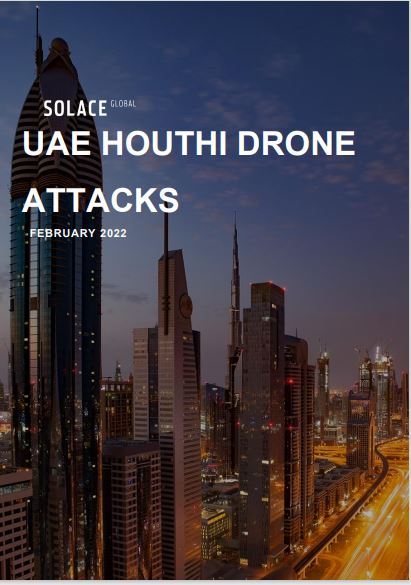 January 2022 saw the United Arab Emirates (UAE) come under attack from the Houthis in Yemen. The attacks, of which four have taken place since mid-January, have seen the country targeted with missiles and drone strikes. The first attack took place on 17 January and left people three dead.

Executive Summary
January 2022 saw the United Arab Emirates (UAE) come under attack from the Houthis in Yemen. The
attacks, of which four have taken place since mid-January, have seen the country targeted with missiles and
drone strikes. The first attack took place on 17 January and left people three dead. The second attack, on 24
January, was thwarted by the American Patriot surface-to-air missile system. The third attack, on 31 January,
took place whilst Israeli President Isaac Herzog was visiting the UAE, marking the first visit to the country by
an Israeli president. The initial attack saw operations at Abu Dhabi International Airport suspended, however,
according to Emirati officials, the latter attacks did not impact airport operations.

On 2 February, the UAE was attacked a fourth time by three drones, all of which were intercepted by the
country’s air defences. This fourth attack was subsequently claimed by the Iraqi militia group, True Promise
Brigades.

The UAE has been involved for a number of years in the Saudi-led coalition against the Houthis in Yemen;
however, unlike Saudi Arabia, it has suffered very few direct attacks from Yemen. As a result, and in spite of
region’s volatile geopolitics, the UAE has managed to maintain its reputation as being a stable country. These
recent missile attacks underscore the dangers in the region and show that the UAE is not immune from such
threats. The targeting of the UAE also likely marks a new phase in the region’s ongoing conflict in Yemen.

Request our 5 page report on the latest developments within the UAE.

Complete the form to receive the report in your inbox.

Please check your junk folder if report has not been received within 5 minutes.