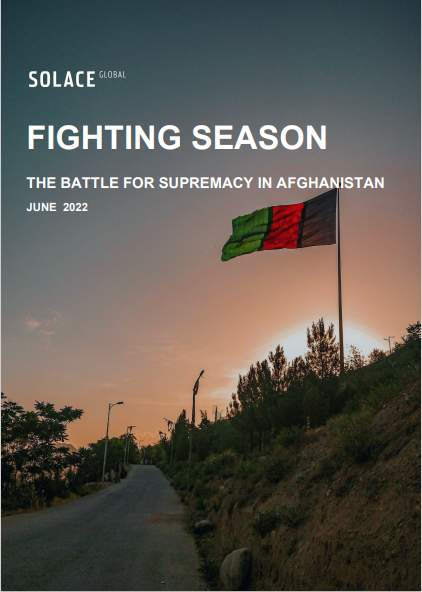 This year represents the first in two decades where the Taliban will not be the principal belligerents in the traditional fighting season.

The 2021 fighting season marked a period of immense change, culminating in the fall of Kabul and the Taliban seizing de facto control over Afghanistan in August 2021.

This report analyses the current threat landscape in Afghanistan and the challenges facing the Taliban in the months ahead.

Historically, periods of fighting in Afghanistan have followed a cyclical pattern known as the ‘fighting season’; an annual uptick in insurgent activity and violence running between April and October. The fighting season corresponds to agricultural cycles driven by the opium poppy harvest, improving weather conditions (winter weather renders large parts of the country impassable, including border regions with Pakistan), and recesses in Pakistani madrassas (a source of recruits). Socio-economic factors feed into these seasonal changes, with under-employed and unemployed young men taking up arms after the end of the seasonal poppy harvest.

The 2021 fighting season marked a period of immense change, culminating in the Taliban seizing de facto control over Afghanistan in August 2021. The 2022 fighting season thus represents the first such season in two decades where the Taliban will not be the principal belligerent, and as such the nature of any increase in violence is likely to be different when compared to previous years.

New and old organisations alike have asserted their presence in Afghanistan in the wake of the Taliban’s success, establishing themselves as insurgent forces directed against the new regime. The power bases, resources, and territorial extent of these groups has been largely influenced by the 2021 fighting season, which was dominated by a Taliban offensive that began in May 2021. This report examines the background and current situation of Afghanistan, key national actors, probable conflict hotspots in the 2022 fighting season, the regional implications for an Afghanistan under Taliban rule, and the likely outcomes for Afghanistan itself.

Enter your details for the report to be emailed, please check your junk folder if not received.