There has been a surge in attacks committed by terrorist groups in the Nord, Sahel and Est regions of Burkina Faso, highlighting a deterioration in the security environment in the last six months. While most attacks have targeted military and security personnel, Islamist militant groups have shown the capability and willingness to target government and commercial sites. Security has improved in urban centres following the March attack in the capital Ouagadougou; however, largely ineffective counter-insurgency measures and the remote terrain, underscores need for additional security precautions for travel to border regions. 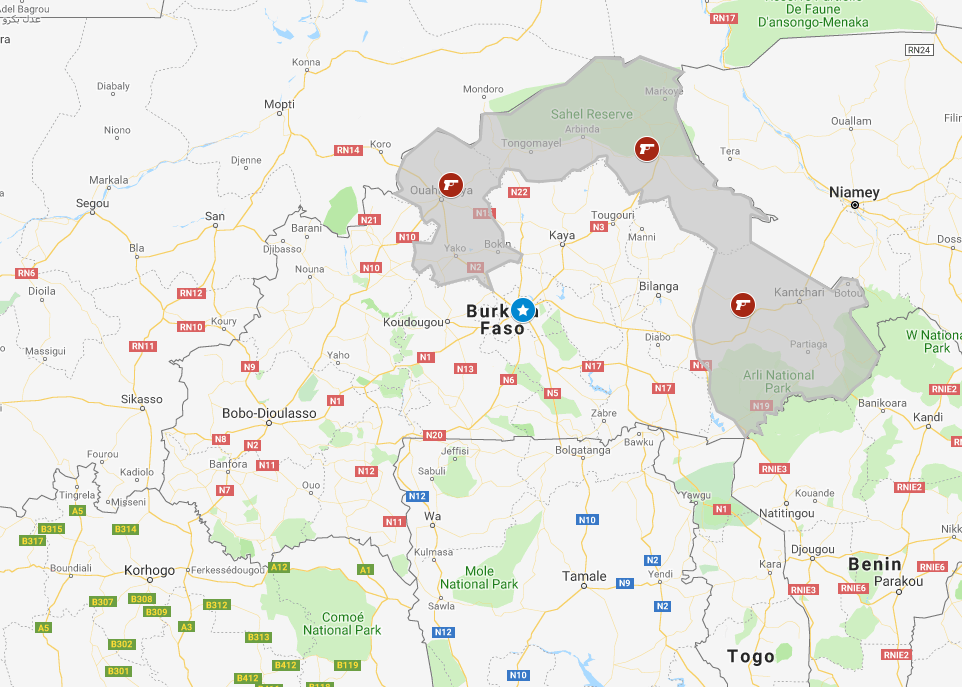 Over the last six months, the Nord, Sahel and Est regions of Burkina Faso have seen a steady rise in security incidents, especially in border areas.  The increasing trend of both militant and criminal attacks highlights the growing instability in border regions and underscores the need for additional security considerations when travelling to these areas. On 6 October, a military vehicle struck on landmine killing two soldiers in Pama (Est Region). The previous day, Islamist militant ambushed a police convoy resulting in the death of six officers in Solle (Nord region). While most attacks target security and government personnel, two foreign nationals and one local national were kidnapped as they were travelling from Ouagadougou to a gold mine in Soum province (Sahel region). The recent escalation in security incidents highlights ongoing efforts by Islamist militants to destabilise the region and further emphasises the severity of the threat to travellers in the border regions.

The rise of insurgent movements in the Sahel Region affected Burkina Faso later than most surrounding countries. However, since 2015 and the kidnap of Romanian expatriate from a mine site in Oudalan province (Sahel region), the country has seen a steady rise in militant activity presenting additional security concerns for businesses who have staff operating in the Nord, Sahel and Est regions.  Additional security forces have been deployed in an effort to counter the threat however, the brutal tactics currently being employed by the military is fuelling recruitment and support of militant groups due to local level resentment.

On 24 September, Burkinabe security forces entered the village of Petegoli (Sahel region), killing 20 residents for alleged links to Islamist groups.  On 26 September, in response to the attack, militants targeted a military convoy with an improvised explosive device (IED) killing eight soldiers. Such tit-for-tat exchanges are coming to characterise the security environment in the regions, reinforcing concerns with road travel.

Additionally, ongoing political uncertainty in the nation’s capital, Ouagadougou, has resulted in limited governance, investment and security in the Nord, Sahel and Est regions. The border regions maintain strong commercial and livelihood potential through the exploitation of natural resources; however, the government has shown minimal willingness to invest in infrastructure to support such industry. A perceived ethnic division and feeling of isolation has led to the formation and then fuelled the growth of the Muslim group Ansarul Islam in the Sahel region. The group has built its support on the back of this local discontent, promoting equality and challenging the dominance of traditional families and religious leaders.

As such, Ansarul Islam presents a viable alternative to hierarchical civil structures that leaves the population entrenched in poverty. As development indicators fell in the region and ongoing drought conditions crippled pastoral and agricultural livelihoods, the Ansarul Islam’s message resonated with young, unemployed and socially disadvantaged people. Some followers turned away from the group after they turned to violence; however, many continue to support the group, aiding their movements and low-level insurgency against local and national authorities as well as commercial sites in the region is likely to continue. Banditry continues to pose a problem in the region with armed youth groups often targeting commercial vehicles travelling to industrial and mining sites.

As instability has grown in the border regions, transnational Islamist groups have begun to establish operations and launch cross-border incursions from Mali. Both the Islamic State Greater Sahara (ISGS), believed to be working in coalition with Ansarul Islam, and Al Qaeda affiliate Jama’at Nasr al-Islam wal Muslimin (JNIM) have launched multiple attacks in Burkina Faso over the past two years. Most of these attacks have occurred in the Nord, Sahel and Est regions, though JNIM did claim credit for the French Embassy and National army headquarter attack on 2 March in Ouagadougou that led to 30 deaths and 85 injuries.

This recent alleged coalition between two of the main insurgent groups, Ansarul Islam and ISGS, could be a factor behind the escalation in violence which saw 16 separate terror incidents throughout September, a significant rise in the last six months. Foreign nationals, as well as commercial sites run by international organisations, remain viable targets for militant groups. Kidnap for ransom remains a heightened risk as it represents a potential resource stream for criminal/militant groups as well as propaganda value for Islamist groups.

While security has subsequently improved in urban centres and around major industrial sites, the porous border with Mali, Niger and Benin means Islamist groups can operate regionally, making it difficult for national military units to track them. The G5 Sahel counter-terrorism coalition, established in November 2017, has made some improvement to security in the region, ensuring better coordination of cross-border operations; however, they remained under-resourced to fully tackle the rising insurgencies.

While travel to Burkina Faso can proceed, enhanced security precautions should be considered for the duration of your travel.

Travel to regions that border Mali, Niger and Benin

Conduct an assessment prior to choosing accommodation options even if it is on a work site. Accommodation should be located away from likely targets wherever possible. Features to consider include: a secure perimeter, 24/7 guards, access control measures at the gates to scan vehicles, CCTV surveillance, a safe room and robust room security. In the event of a crisis, the accommodation should have clear crisis plans including evacuation and assembly areas.

Ensure you have adequate communication and considered utilising a GPS navigation tracking system and check-in with security professional once a day. If you notice anything unusual, make sure you pass on this information during the call.

If undertaking travel by vehicle, consider utilising security support. While this can be arranged with Burkinabe military through local contacts, recent attacks on military units highlight the need to seek security support through one of our approved providers who will be able to offer a low profile but secure approach to ground transit.

Road moves should only be conducted during daylight hours, in a well-maintained four-wheel-drive (4WD) vehicle with a comprehensive breakdown kit, water, additional fuel, adequate communications systems and a medical kit. Daily itineraries should be considered carefully, selecting major routes where possible and identifying safe and suitable locations to stop for fuel and provisions, in coordination with their local driver and contact.

Where possible, conduct intercity travel by air. If road travel remains the only option, ensure you vary your routine and remain alert to any signs of surveillance. Do not discuss your travel plans and nationality with people you do not trust and register with your embassy prior to travel.