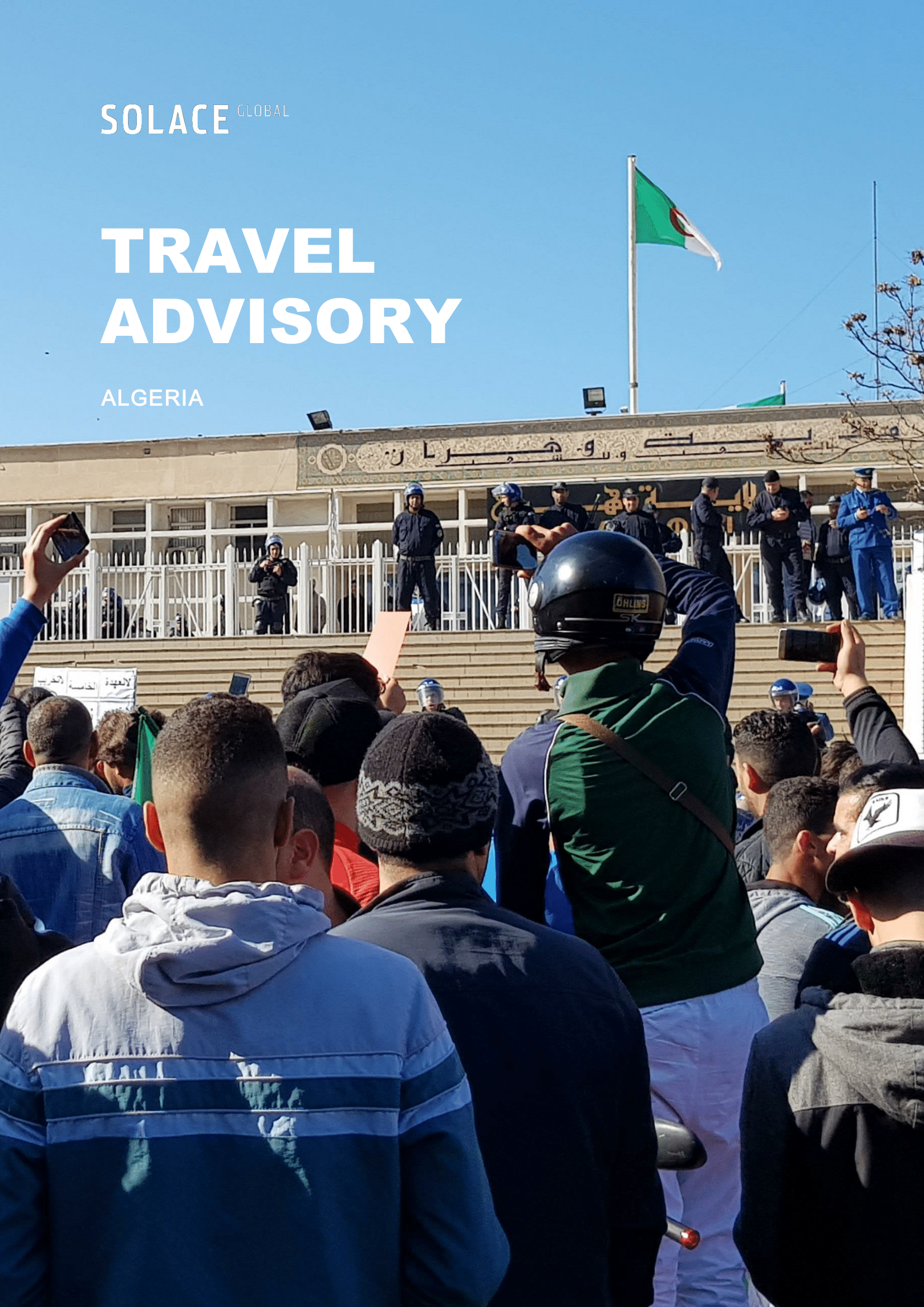 On 11 March, following prolonged protests in the country, President Abdelaziz Bouteflika announced that he would not seek a fifth term; however, planned elections have also been suspended.

On 16 February, ten days after President Abdelaziz Bouteflika announced his candidacy for a fifth presidential term in a signed statement, a protest occurred in Kherrata. The small town, approximately 200km east of Algiers, only saw a few hundred young people take part in the rally against the president. However, on 19 February, then on 21 February, posters of Bouteflika were torn down from city halls and trampled. Subsequently, on 22 February, protests were organised, via social media, in the majority of the major urban centres with an alleged 800,000 people taking part. The protests have since continued, a statement of high symbolic value, given that public demonstrations have been formally prohibited since 2001 and that the government survived the Arab Spring relatively unscathed.

Abdelaziz Bouteflika, who has been president since 1999, is hardly ever seen in public due to his ill-health after suffering a stroke in 2013. The president also failed to file his candidacy in person; which was controversial as legislation stipulates that the candidate must be physically present for the process. This led to demonstrations by the Algerian population and especially the young generation, who are frustrated by the lack of economic opportunities and the corruption of an “elite” that has governed the country since its independence from France.

Despite his ill health and advancing age – the president turned 82 at the beginning of March – most high-level politicians, trade unions and political parties had been calling for the president to run again. This widespread support is unusual due to the president’s health, with many asking whether the president is mentally and physically fit enough to effectively lead the government. Which raises the questions, why do so many different elements want him to stand for re-election, who would benefit from it and, most importantly for businesses and travellers, what does this mean going forward?

Unrest has continued in the country despite the announcement by President Bouteflika that he would not seek a fifth term. Many are calling for the president’s immediate resignation and for a set date for the elections to be announced. Many believe that the recent announcements have been merely a “trick” to prolong the president’s two decades in office, which could be rendered impossible by its deteriorating physical health. However, as Algeria is known to be governed by a combination of military, intelligence personnel and political elites. It is likely that these groups are now attempting to delay the elections in order to manage the succession process.

This group is known as the power (or le pouvoir) and its exact makeup is unclear. The group may consist more of a network of businessmen around Bouteflika’s brother, Saïd, or even be an elite circle within the ruling FLN party that are the chief power brokers. Some, such as Italian born Moroccan journalist Anna Mahjar-Barducci, claim that the military’s Department of Intelligence and Security (DRS) is really the main decision-making organ in the country. Regardless of the make-up, it is unlikely that the pouvoir will want to see their iron grip on power diminished after 20 years.

With all these differing actors, and significant ambiguity over who is actually running the country, the next few weeks are going to be vital for the country’s long-term stability. Algeria suffers from high unemployment and a sluggish economy, especially amongst young people, who are asking for reform and increased development opportunities. Should this be denied, we could begin to see the protests, which have only seen limited clashes thus far, escalate into widespread violence. The government, under the new Prime Minister Noureddine Bedoui, has already attempted to appease the younger generation with a commitment to form a temporary government of technocrats and “others” to work towards political change.

The government has also urged for the opposition to accept dialogue. However, this has not appeased the lawyers and activists who protesters have chosen to lead and their desire for radical reforms. Many Algerians, who want power to move away from the current elite to a new, younger, generation with fresh ideas, are in no mood to compromise and negotiate, at least for now. As such, the likelihood that unrest will continue is high with the next steps for both those in power and the country unclear.

The next weeks could see violence spread, especially if the government tried to forcefully remove protesters from the street; a move they have not been willing to make yet. Additionally, the protests could grow in the coming weeks should little political progress be made. There is only so long that the government can stall for time before the demonstrators’ patience wears thin. Both these actions present an increased risk to businesses and travellers in country.

Travellers, risk managers and businesses are therefore advised to monitor the situation. The political situation remains volatile and could deteriorate negatively rapidly. At this time, it looks unlikely that Algeria will follow other countries in the wider region and collapse into significant political and civil unrest; like that seen in Libya and Syria. The country was able to withstand the original Arab Spring unrest in 2011 with limited ramifications. The biggest likelihood in the coming weeks is that the continued unrest will force resignations and token reforms from the government. However, the unrest and political turmoil could give opportunity to Islamist groups in the region. Should this occur, the country may see a protracted insurgency similar to that seen in Egypt.

Finally, demonstrators may decide to start using non-violent actions to put pressure on the government, strikes and protests blocking roads and transport hubs. Travellers are advised to be aware of the common protest locations if visiting major cities in the country. In Algiers these are the Place 1er Mai, Place Maurice Audin, along Rue Didouche Mourad. Additionally, the iconic Grande Poste d’Alger has been a focal point for protests in the past. In Oran, the Place d’Armes has seen the majority of the unrest. All cities, including, but not limited to, Algiers, Annaba, Bejaia, Bida, Constantine, Oran, Setif and Tizi Ouzou see unrest centred around their university campuses. 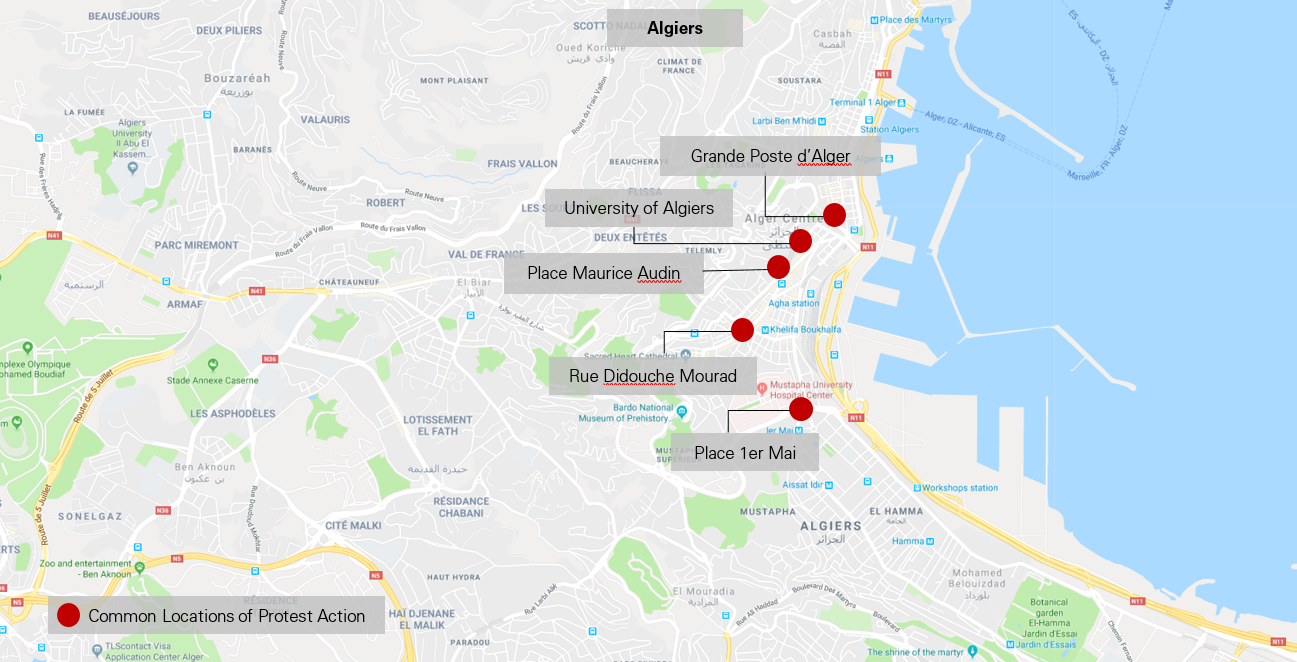