The Independent National Electoral Commission (CENI) declared opposition leader Felix Tshisekedi winner of the 30 December Presidential Election in the early hours of 10 January. The result contradicts both pre-election polls and tallies compiled by the Catholic Church – the biggest observer network in the DRC - who had briefed foreign diplomats on 3 January on the belief that another opposition candidate, Martin Fayulu, had won. Fayulu’s immediate rejection of the results and accusations of an electoral coup has raised fears that widespread unrest will occur. Travellers should continue to minimise all movement outside secure accommodation in the coming days. 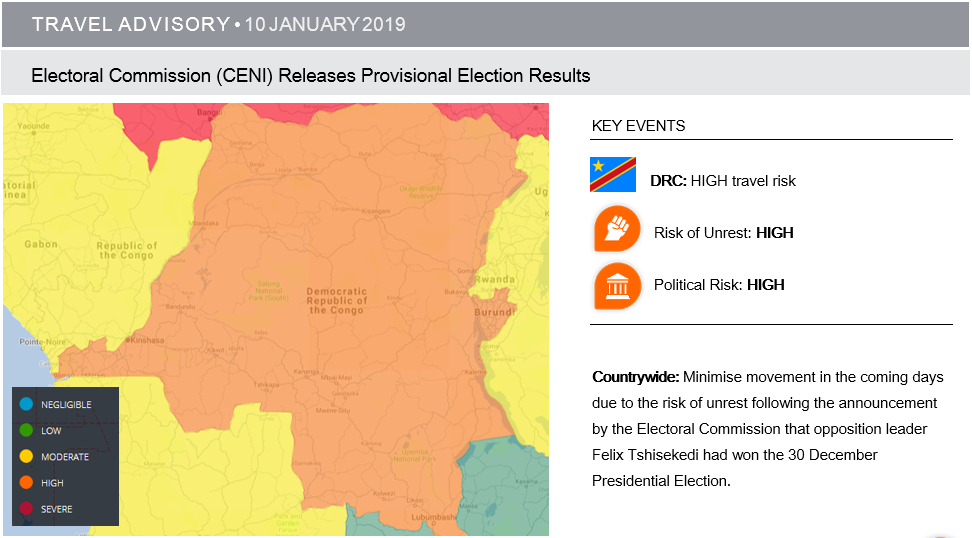 In the early hours of Monday 10 January CENI released the results of the 30 December Presidential Election, stating that opposition candidate Felix Tshisekedi had won the Presidential election with 38.5% of the vote. Current incumbent Joseph Kabila will step down after 18 years in office. Even though this will be the first time that a candidate from an opposition party has been elected to the office of President since DRC gained independence in 1960, controversy remains over the legitimacy of the results. A week ago, foreign diplomats were briefed by the biggest election monitoring body in the country – the National Episcopal Conference of the Congo (CENCO) – that their tallies indicated that another opposition candidate Martin Fayulu, leader of the Lamuka coalition, had won the election. The French Foreign Ministry stated that the election of Felix Tshisekedi was at odds to what was observed on the ground and called for clarity on the results. Fayulu, who had polled 20 points ahead of Tshisekedi, immediately responded to the announcement by rejecting the results and his supporters are calling the outcome an ‘electoral coup’ raising fears that widespread unrest may occur in the coming days.

The current ruling party the People’s Party for Reconstruction and Democracy (PPRD) were quick to acknowledge the official announcement and congratulate Tshisekedi with their candidate, Emmanuel Ramazani Shadary, finished third. It remains a significant development that they have not contested the election results. President-elect Tshisekedi called Kabila an important political partner during his celebratory speech and some are speculating that a power-sharing arrangement could have been made between the two parties. Tshisekedi, who inherited the main opposition party from the legendary opposition leader Étienne Tshisekedi, does not possess the same charisma and political nous as his father and it remains unlikely that he will be able to challenge Kabila’s hold over the military, security services as well as key government ministries.

The losing candidates will now have ten days to contest the election results in the country’s constitutional court before Tshisekedi is sworn in.  International condemnation may follow if the Catholic Church can provide evidence that their tallies are contradictory to the election result announced by CENI. It is likely that Fayulu will contest the results in the coming days and protest will occur as Fayulu seeks to build momentum behind the challenge. Any unrest is likely to be met by a forceful response by security forces. Six people have been killed and multiple others injured as protests broke out in Kwilu and Tshopo provinces on 10 Janaury.  Celebratory rallies are also causing major disruption in Kinshasa, Lubumbashi, Matadi and Bukavu.

The US Embassy in the DRC reiterated its advice on 9 December that all US citizens should depart the country and 80 US troops have been stationed in Gabon in the event that there is a severe deterioration in the security environment requiring the evacuation of US nationals. In Kinshasa, riot police have been deployed in key areas throughout the city including outside government buildings and near the CENI building on Boulevard 30 June.

Travellers currently in the DRC should minimise all movement and remain in secure accommodation over the coming days due to the risk posed by widespread unrest and associated violence. There is intermittent disruption being reported to both internet and text messaging services and personnel should ensure they have access to a means of communication and establish a check-in process with their relevant travel risk managers or designated organisational contact. Continue to monitor local and international media, in country contacts and Solace Global Alerts for details of any planned or ongoing demonstrations in your area.