The recent outbreak of Ebola Virus Disease (EVD) in North Kivu and Ituri border provinces in the Democratic Republic of Congo (DRC) continues to gather pace as the international response is hampered by ongoing militancy in the affected areas. As of 11 November, a total of 329 EVD cases (294 confirmed and 35 probable) have been reported, leading to 205 deaths. Those in, or travelling to, eastern DRC should receive an independent medical training, focusing on transmission control as well as community engagement. Travellers should also receive a briefing and mitigation advice on the prevailing security threats. Travel Risk Managers should have clear emergency protocols and escalation strategies in travel risk plans, and consider the variable international guidance on safe staff repatriation from Ebola affected areas following the end of deployment periods. 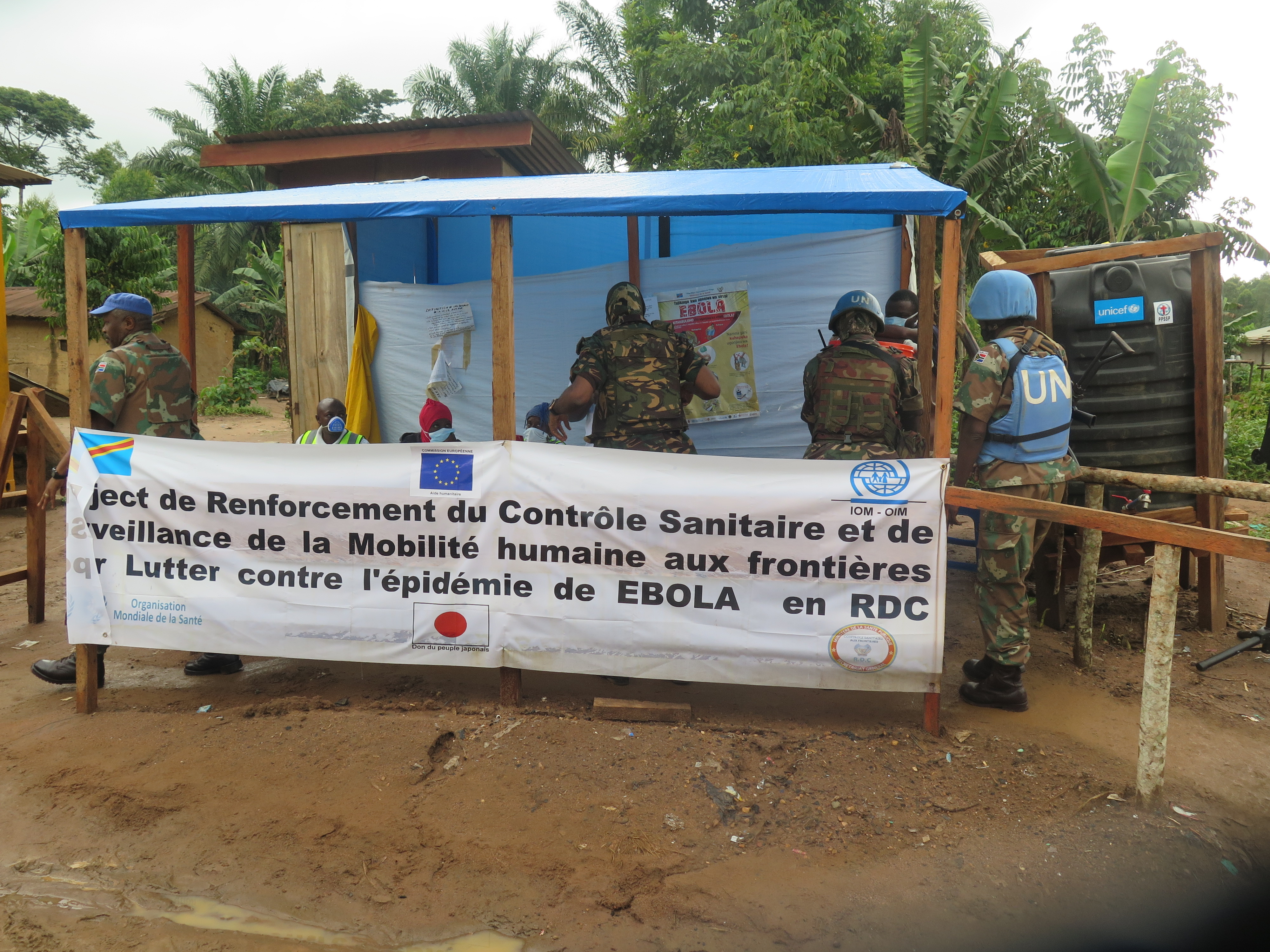 Health/Armed Conflict: The director of the Centers for Disease Control and Prevention (CDC) on 5 November warned that the current Ebola Virus Disease (EVD) outbreak is at risk of becoming entrenched in the eastern region of the Democratic Republic of Congo (DRC), exceeding the capacity of international public health organisations to bring the outbreak under control. This latest development comes as international organisations are facing greater security threats and difficulties ensuring the protection of their staff, leading to some organisations opting to suspend their operations.

As violence in the North Kivu province has escalated, in some cases targeting health workers, both the Congolese Ministry of Health and international responding organisations are increasingly unable to access communities in some of the worst hit areas leading to the Ebola case rate to double in October from the previous month.  Longstanding government mistrust in Ituri and North Kivu provinces has resulted in local communities remaining resistant to seeking treatment in the affected area. The Congolese Ministry of Health (MoH), who are leading the response to the current Ebola crisis alongside international partners such as the World Health Organisation (WHO), are using military assets to support their response measures, further exacerbating local engagement issues.  The use of military assets has further exacerbated tensions in the region due to historic allegations of human rights abuses.

The EVD crisis unfolding in eastern Congo presents significant challenges for staff operating in the area. At this time, the outbreak currently remains contained in the two border provinces of Ituri and North Kivu; mainly due to the rapid and effective infection control measures taken by neighbouring countries. However, the virus is becoming increasingly entrenched within the infected provinces due to ongoing access and security issues. Currently, both Butembo (town) and Beni (city, both North Kivu) are the most affected as the ongoing insurgency is resulting in Ebola transmissions escalating while public health access remains severely limited. Multiple militias remain active in the border regions with Uganda and Rwanda, presenting insurmountable obstacles for international organisations in delivering an effective response. Additionally, longstanding local mistrust of the Congolese government and military entities has reduced the engagement of local communities seeking medical treatment and adapting to new transmission control behaviours.

Over the last six weeks there has been an increase in the specific targeting of medical response teams in North Kivu province leading to the withdrawal of international response teams and disruption to Ebola treatment programmes. Two public health workers operating alongside the Congolese military were fatally shot on 20 October by militants in Butembo city (North Kivu) after militants opened fire on their position. On 2 October, two national Red Cross workers were attacked in Butembo by a local community after assisting in the implementation of safe burial procedures at a local boy’s funeral. The crowd became hostile after the boy’s father told the burial team that he did not want his son’s body treated in such a way that contravenes local burial customs.

Violence has also continued in North Kivu as militant groups have used the escalating crisis to launch attacks on security forces and civilians.  On 10 November suspected Ugandan rebels associated with the Islamist militant group, the Allied Democratic Forces, killed six people and kidnapped five children in the Mayimoya commune, Beni (North Kivu province). Earlier in the day, Mai Mai rebels, a militant group initially established by local communities to protect civilians and livestock from other armed groups, attacked a military camp in Beni, killing one soldier. Intensifying violence in Beni has led to several major international aid agencies suspending their operations in the city.

Operating constraints remain the most serious challenge for international responding organisations in Ebola-affected regions. The two provinces (Ituri and North Kivu) are remote, with limited communication and poor transport infrastructure. Both governance and health services are severely limited in the region, which has led to longstanding cultural practice to dominate local communities’ response to transmission control. In recent days Ebola health workers in Ituri province have gone on strike due to arrears in government payments, highlighting the challenging and tense environment organisational employees face and the limited governance in the affected provinces. The strikes have led to huge delays at Ebola screening checkpoints, further increasing the risk of transmission.

The Ebola response has led to a period of heightened tension, creating adverse security implications for response staff operating on the ground. Between 2014 and 2016 a series of civilian massacres left 700 dead in Beni, with many rights groups alleging that the Congolese military were complicit in the attacks leading to longstanding fear of the military amongst local residents. The use of military-run health units has further exacerbated these local tensions with residents remaining fearful of engaging with such government-run units. Humanitarian organisations also face a conundrum in associating with the government as it limits their appearance of neutrality and independence, increasing their association with the government. The current operating context has resulted in significant disruption to the current Ebola treatment and vaccination programmes, leading to the UN security council issuing a resolution calling for the immediate end to hostilities and the targeting of health facilities and workers. 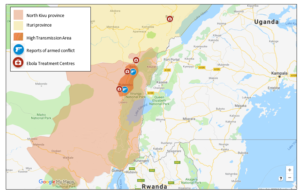 Eastern DRC presents an increasing complex environment for organisations with a staff presence in the region. Any operations must consider the multiple risks to employees on the ground and develop strategies to minimise their vulnerability. In order to achieve this, organisations should consider using a threat analysis model, that considers both threats posed by the environment, the vulnerability of operating in the area (both reputational and personnel focused), and finally considers a remediation approach once threats and vulnerabilities have been identified. This process is a pre-emptive and continuous cycle that is constantly reassessing threats and vulnerabilities to ensure remediation strategies are implemented as soon as potential risks are detected. This process can support organisations making timely and appropriate decisions that focus on duty of care towards their employees while also building organisational resilience and sustainability of operations.

Threat detection: There are a multitude of threats facing organisations deploying to or with staff in North Kivu and Ituri provinces, DRC at the current time. To simplify the process this advisory will look at the most pertinent threats related to the EVD Crisis; however, when developing an operational threat and vulnerability assessment, it is important to consider the full spectrum of threats in your analysis.

Vulnerability detection: Every organisation will have attributes that make it vulnerable to the specific threats posed by the EVD outbreak in DRC. By identifying these vulnerabilities (be it structural, geographical or technological) weaknesses can be understood and therefore strategies implemented to reduce such vulnerabilities

Medical: Staff deploying should be fully briefed on the medical risks in the DRC and should be trained on how to minimise the risk of transmission, including the use of personal protective equipment (PPE). Pre-identify high risk activities, such as field visits, funerals and operating in EVD treatment centres, and attempt to minimise staff exposure to such activities.

Security: Staff should understand what to do in the event if an escalation occurs and have clearly defined emergency points of contact that they can ring in the event of an emergency. Prioritise building networks with other organisations in the area with clear information sharing arrangements. Remain up to date with the latest location specific security information and trends by monitoring news sources and security alerts.

Accommodation: Criminal attacks on organisational compounds and international staff housing do occur in eastern DRC. All accommodation should be sought in secure housing compounds with clear and visible security measures that will mitigate the potential of the compound being targeted. This should include a perimeter wall, visible 24/7 security presence, CCTV, metal doors and strong visible locks as well as access to multiple communications devices with a dedicated phone number for emergencies.

Secure travel:  Any travel outside the accommodation area should be planned ahead of time and risk assessed alongside a security trained focal point.

Our latest COVID-19 report is now available. The new weekly report replaces our fortnightly advisories and has a sp… https://t.co/z0q1FK68Rz

With #COVID19 #vaccines being rolled out globally at a rapidly increasing rate, we will be replacing our fortnightl… https://t.co/89KsUQXrhz

Despite the global vaccination campaign, many countries are still suffering high daily infection rates and remain u… https://t.co/CbSvg6O0WF

On 28 March, Palm Sunday, an explosive device was detonated outside the Sacred Heart of Jesus Cathedral Makassar… https://t.co/cx4m2QFQwf

*WE ARE RECRUITING* Solace Global Risk is recruiting for experienced female security operatives based in the Londo… https://t.co/wMmCg74EoP

For those who do not intend to be there, being caught up in a #protest, regardless of the cause, can be frightening… https://t.co/D0zhSmSbyY

On 11 March 2020, the @WorldHealthOrg2 declared a global pandemic following the emergence of #COVID19 First appear… https://t.co/MreXumdUid

Ever felt frustrated with companies unwilling to work to your #travelriskmanagement needs? Providing clients with… https://t.co/Pog9vSRCpZ

Today is #InternationalWomensDay. At Solace we continue to empower female business travellers across the globe, pro… https://t.co/zqx4iQPRhs