Four people have been killed and tens of people have been injured following countrywide anti-government protests that began on 23 January which marks the anniversary of the fall of the military dictatorship that ruled the country until 1958. The US-led decision to recognise opposition leader, Juan Guaido, as the rightful interim president is likely to provoke a forceful response from de jure President Nicholas Maduro who will increase measures to suppress opposition support. Further demonstrations are expected in the coming days, almost certainly leading to widespread clashes between protesters and security forces. Arbitrary arrests of foreign nations cannot be ruled out. All travel to Venezuela should be deferred in the coming days and foreign travellers currently in country should consider leaving in the next 24 hours. 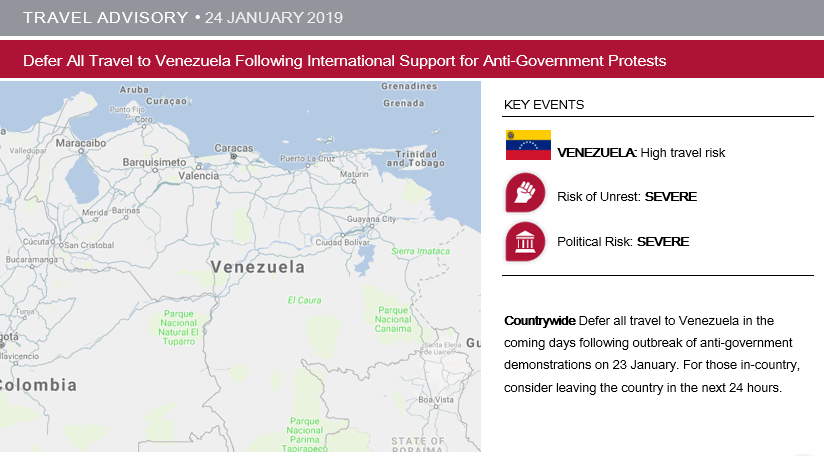 Violent anti-government rallies broke out in Caracas, Barquisimeto and other Venezuelan cities on the anniversary of the 1958 civilian-military movement that deposed the military junta ruled by General Marcos Jimenez and restored democracy. Current President Nicolas Maduro is facing greater pressure from Venezuelan citizens that started following widespread allegations of fraud during the 20 May 2018 Presidential Elections alongside the deteriorating economic situation and the mismanagement of natural resources. The current economic downturn has led to what is being referred to as a humanitarian crisis and the United Nations began the distribution of international aid in May 2018 for the first time in the country’s history. A shortage in food and medicine, alongside hyperinflation and rising commodity prices, has fuelled tensions throughout the country and calls for President Madura to step down. In response to the anti-government protests, supporters of the ruling Socialist Party organised counter-demonstrations leading to clashes between rival demonstrators.

Local reports indicate that in response to the widespread unrest, security forces have used live ammunition and tear gas to disperse protesters from key areas in the capital, Caracas, and several other cities leading to the deaths of at least four protesters.  Disruption to the internet service was reported throughout the day and is likely to continue today as the government seeks to minimise the use of mass communication that could support the organisation of rallies.  City-wide demonstrations are expected to continue in coming days throughout Venezuela bolstered by the decision of numerous international governments, including the United States, to recognise opposition leader, Juan Guaidó, as the rightful interim President of Venezuela.  In response, American diplomats are been given 72 hours to leave the country.

Recent developments are likely to provoke a stronger response from Maduro who still has support from the military and police force in Venezuela.   Arbitrary arrests of politicians, journalists, students and civic leaders are likely to follow the recent announcement and security forces will likely increase the use of violent means to suppress protests.  Medical centres in most major cities remain severely under-resourced and unable to deal with mass casualty situations.

All travel to Venezuela should be deferred in the coming days and foreign personnel should attempt to book flights out of the country in the next 24 hours.  If travel is not possible, seek secure, preferably compound based, accommodation.  Travellers should be prepared to stand fast for several days. Accommodation should have access to multiple days’ worth of food and water as well as multiple communication methods and preferably an independent power source.

For those in-country, it is important to stay up to date with local developments and planned protests through the media, local contacts and Solace Global Alerts. Anticipate the closure to critical service including public transport and banking institutes as well as disruption to the internet and telecommunication networks.  If you find yourself in the vicinity of a protest immediately leave the area and return to a safe location.  Solace Global remain able and prepared to support with a range of travel security solutions through its Global Partnership Network.