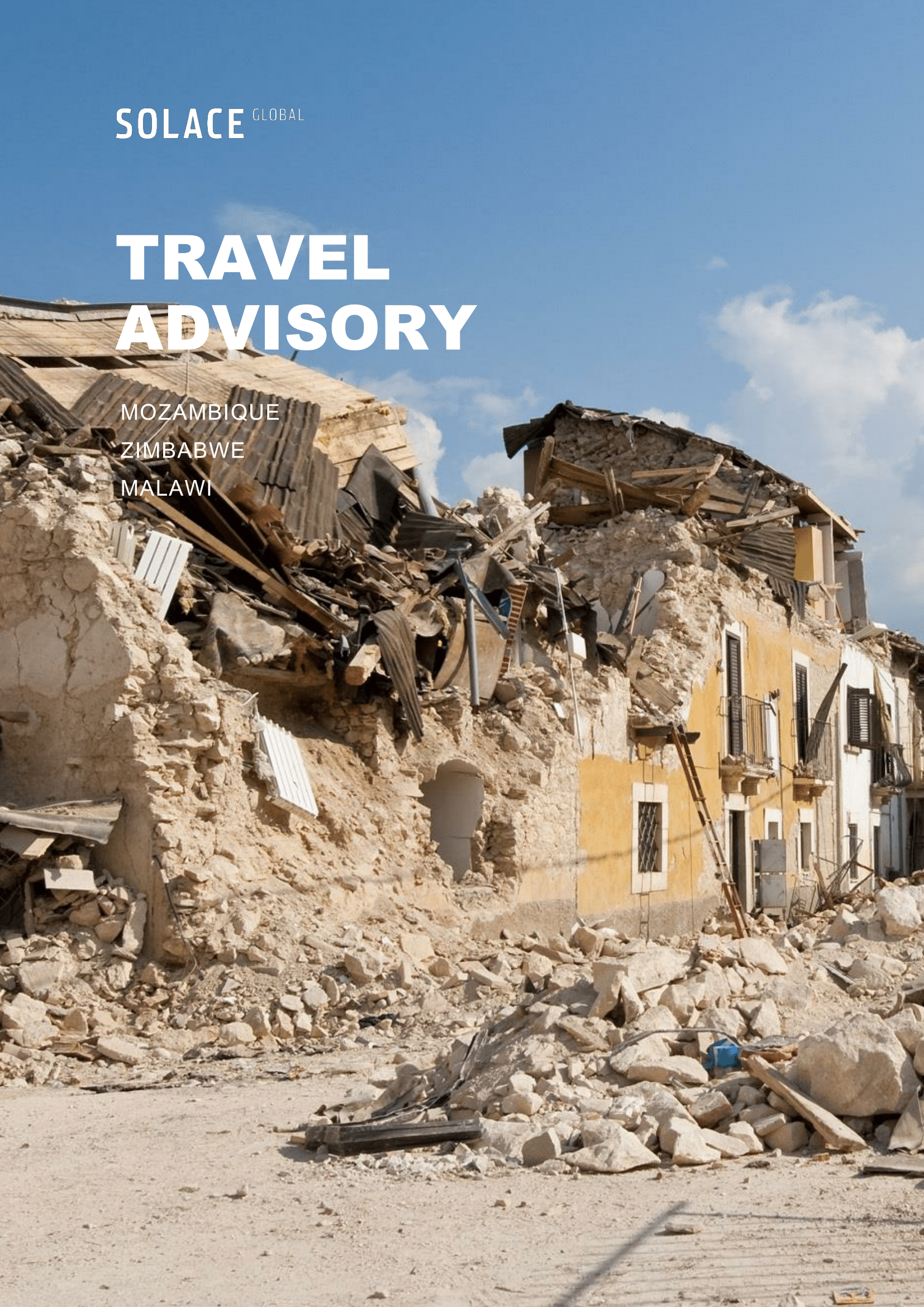 On 14 March, Cyclone Idai hit the port city of Beira in Mozambique, before proceeding inland and impacting the neighbouring countries of Zimbabwe and Malawi. The storm was followed by several days of rainfall that caused extreme flooding in most of central Mozambique and forming what have been defined as “inland oceans”. There are also significant shortages in food, water, fuel and medicine. While relief operations are ongoing, the disaster is likely to have severe medium- and long-term consequences that might trigger a region-wide humanitarian crisis. 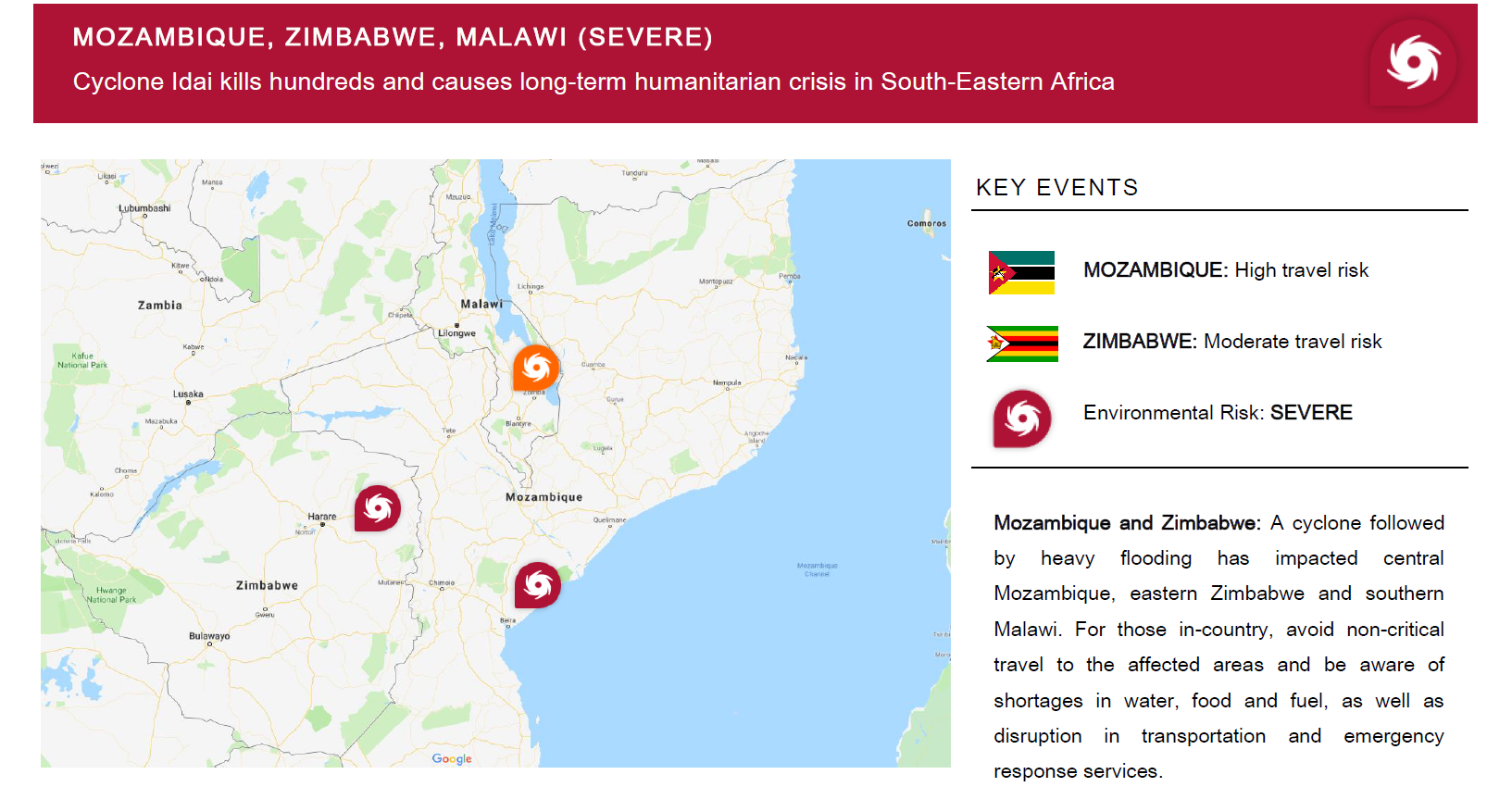 Cyclone Idai reached Mozambique between Thursday and Friday last week, wiping away 90 percent of the port city of Beira before moving inland towards Zimbabwe and Malawi until dissipation, causing flooding, landslides and widespread destruction. The governments of Mozambique, Zimbabwe and Malawi, declared national emergencies and requested international aid while they initiated search and rescue operations. As of today, there are approximately 217 confirmed casualties in Mozambique and 139 in Zimbabwe and 56 in Malawi, but these numbers are expected to grow significantly as the flooding recedes, and an accurate assessment becomes possible. The President of Mozambique, Philippe Nyusi, expressed fears that the death toll could reach over 1,000 in his country alone, while it has also been reported that victims in Zimbabwe have been carried downstream towards the Indian Ocean into neighbouring Mozambique.

The cyclone, which is being termed the worst weather-related disaster in the southern hemisphere, has affected 2.6 million people and caused critical damage to the majority of structures, including houses, roads, bridges and powerlines in the region. The heavy rains that followed the cyclone have resulted in heavy flooding, with rising water levels causing both additional infrastructural damage and hindering the efforts to ensure the effectiveness and sustainability of aid operations. Entire regions and towns have been left isolated, with inhabitants stranded on rooftops and trees, making it challenging to deliver aid and locate survivors due to a complete failure in the communication infrastructure. There are currently severe shortages in food, water, fuel and medicine, which has put a strain on operations in the region. According to the World Food Program (WFP), these are not expected to be resolved in the short term and the power grid is not expected to be restored before at least April.

In Zimbabwe, the hardest hit area has been around the district of Chimanimani, where the majority of villages were swept away by landslides, hundreds are still missing and over 200,000 will need international aid in order to survive in the coming months. The southern part of Malawi was also devastated by heavy flooding and landslides caused by the downpour and the rivers overflowing, which brought down critical infrastructure, powerlines and inundated cultivated areas. Thousands have been displaced and the current death toll sits at about 56.

South Africa and Mozambique have deployed their air forces as part of search and rescue efforts, but resources and personnel are far from being sufficient to address a crisis that affects half million people in Mozambique alone. A number of UN agencies, including UNICEF and WFP, have launched an international appeal for immediate funding and logistical support in order to heighten the efforts that are critical in the short term to rescue as many survivors as possible.

Mozambique, as a South-East African nation with a coastline extending for about 2,500 km, is an area prone to tropical cyclones, most common during the summer and particularly between the months of January and February. Cyclone Idai is, however, considered one of the biggest disasters in recent time, affecting not only the three aforementioned nations but the entire region. The infrastructural damage to the powerlines is producing blackouts stretching as far as South Africa, while the river dams in both Mozambique and Zimbabwe are reaching their critical limit and could burst at any moment if not relieved, which is also likely to exacerbate the flooding.

The other largest natural disaster in recent history was Cyclone Eline, which hit Mozambique in 2000 and can provide insightful context to assess the short- and long-term impact of Idai: while Cyclone Eline itself killed 150 people, the flooding that followed produced a death toll of 1000. In fact, the humanitarian crisis currently affecting Mozambique should be understood as potentially three different crises with different consequences and relief requirements: the cyclone and flooding disasters are fundamental triggers for widespread starvation and extreme risk of respiratory, water and insect-borne diseases. The floodwaters are expected to continue rising in the next few days and extend eastwards in what have been defined as “inland oceans”; destroying miles and miles of cultivated land which will impact the self-sustainability of the country going forward. This raises the likelihood that the crisis will extend into the longer term and potentially result in significantly more deaths.

The port city of Beira, with a population of 500,000, was impacted the hardest by the storm and has been almost completely destroyed. The two main rivers in its vicinity, the Pungwe and Buzi, broke their banks during the initial downpour, almost entirely inundating central Mozambique. The most pressing concern at the moment is, in fact, the risk of additional flooding due to collapse of the river dams on both rivers, one of which extends to Zimbabwe, requiring bilateral coordination to resolve the issue. The government and the international relief agencies, such as the International Red Cross and the WFP, are attempting to address a multi-layered crisis with three main priorities: immediate search and rescue operations, ensure food and water is provided to all survivors, while also attempting to restore basic infrastructure and communication in order to coordinate relief efforts. The failure to successfully execute any of these tasks will have serious consequences on the security environment in the country, as food shortages have already caused unrest at emergency shelters.

Additionally, a mid-term effect of the flooding and the presence of large bodies of increasingly stagnating water is the heightened risk of waterborne and insect-borne diseases such as malaria, cholera or typhoid, as well as illnesses caused by low hygiene standard. The destruction and overload of existing medical facilities, as well as scarcity in medicine only exacerbates this risk.

Another long-term consequence of both the cyclone and the flooding relates to a large number of homeless and displaced people in both countries, which will put a strain on contingency and reconstruction measures and will likely result in mass movement and migration both within the countries and their neighbours. In Mozambique, an estimated 400,000 lost their homes in the aftermath of Cyclone Idai and are now hosted in improvised emergency shelters on the small available portions of dry land.