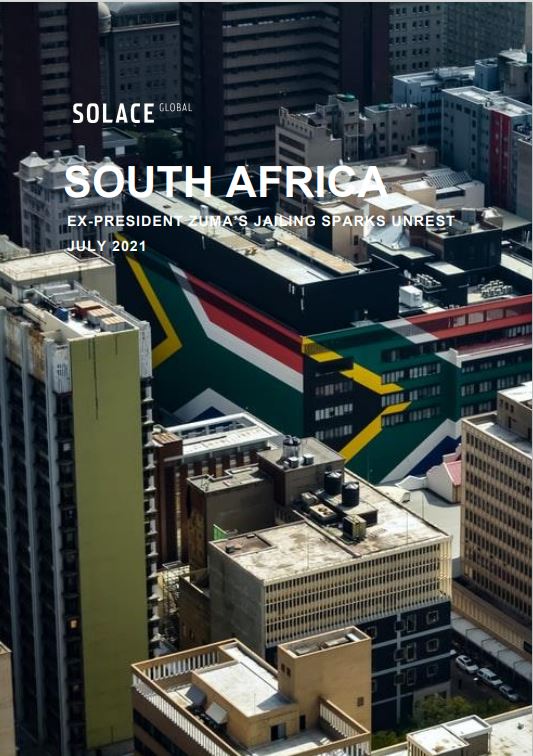 Over the past weeks, South Africa witnessed widespread violent protests that largely focused on cities across the eastern regions of the country. The clashes, initially sparked by the detention of former President Jacob Zuma, were driven by the longstanding grievances over government shortcomings and economic uncertainty that have long plagued the country.

We take an in-depth look at the developing situation within South Africa following the arrest of former President Zuma.

This 4-page advisory gives context behind the unrest, and for those travelling to the country, advice from Solace Global intelligence analysts to help travellers mitigate risk in-country.

Much of the initial unrest was concentrated in Zuma’s home province of KwaZulu-Natal, including its capital city of Durban. Protests quickly grew and spread to neighbouring Gauteng province and the provincial capital of Johannesburg. Demonstrations escalated into violence and looting, as dozens of stores, warehouses and medical centres were ransacked. At the time of writing, 212 people have been killed and thousands have been wounded or detained.

Calm has largely been restored following the deployment of South African National Defence Force (SANDF) troops. However, tensions may escalate again during Zuma’s trial that resume. Unless the government can adopt meaningful economic reform and prioritise tackling the ever-expanding social crises in the country, further similar unrest is likely to reoccur in the coming months and years.