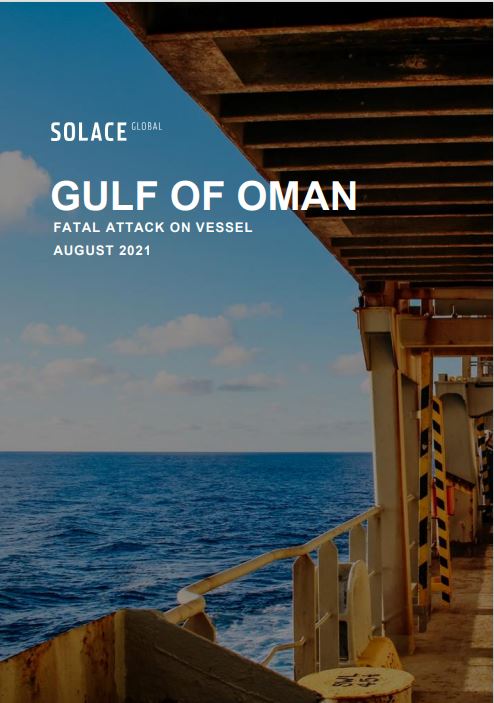 On 29 July 2021, two crew members were killed when the medium-sized tanker, the Mercer Street, was attacked whilst steaming in the Gulf of Oman. The attack represents the worst attack on shipping in the region since 2019. The Mercer Street is a Liberian flagged, Japanese owned ship managed by London-based Zodiac Maritime, part of Israeli billionaire Eyal Ofer’s Zodiac Group.

This three page advisory is a report from our intelligence analysts following a drone strike which has left two people dead in the Gulf of Oman on a Liberia flagged tanker with Israeli links.

On 29 July 2021, two crew members were killed when the medium-sized tanker, the Mercer Street, was
attacked whilst steaming in the Gulf of Oman. The attack represents the worst attack on shipping in the region
since 2019. The Mercer Street is a Liberian flagged, Japanese owned ship managed by London-based
Zodiac Maritime, part of Israeli billionaire Eyal Ofer’s Zodiac Group.
As a result of the connection to Israel, it is widely assumed that the attack was perpetrated by Iran. While not
confirming that they were behind the attack, Iran’s Arabic-speaking Al-Alam News Network cited sources who
claim the attack was a response to an Israeli strike on Dabaa airport in Syria. Should this be the case, it
would mark an escalation in the ongoing shadow war in the region between the two countries.

Key Points;
• There have now been over an estimated 150 attacks, or attempted attacks, on shipping in the region
since 2019 as part of the ongoing shadow war between Iran and Israel, Saudi Arabia and the United
States.
• In response to the two fatalities from the attack, there is likely to be a robust retaliation from Israel,
and potentially the United States, that may be escalatory in nature.
• The incident also serves to only further undermine the complex negotiations currently ongoing to try
and restore the Iran Nuclear Deal.

To request this advisory, please complete this form and the report will be emailed to you.