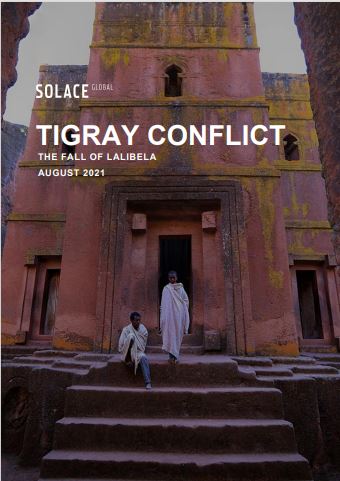 On 6 August, it was reported that Tigrayan fighters had seized control of a UN world heritage site in the neighbouring Amhara region.
As a result of this news the Ethiopian government, stated that they would be forced to respond to the Tigrayans unless they cease expanding into neighbouring regions.

Solace Global's intelligence analysts review the worsening situation and the likelihood of civil war developing within the country.

This 4-page advisory outlines the worsening situation in Ethiopia, with comments from Solace Global’s intelligence analysts  on the likelihood of civil war developing within the country.

• Since rejecting a June ceasefire offer the Tigray People’s Liberation Front (TPLF) have been pushing into neighbouring regions such as Afar and Amhara.

• On 6 August, the TPLF seized control of Lalibela, a holy city and UN World Heritage Site, further raising fears that the conflict is at a point of further escalation.

• As a result of this push, the federal government’s rhetoric has become extreme with the head of USAID even calling it dehumanising, warning it could lead to further human rights atrocities such as ethnic cleansing.

• On 8 August, Sudan recalled its ambassador after its offer to mediate in the conflict was rejected by the Ethiopians.

To request this report and receive free country advisories from our intelligence analysts, please complete this form.