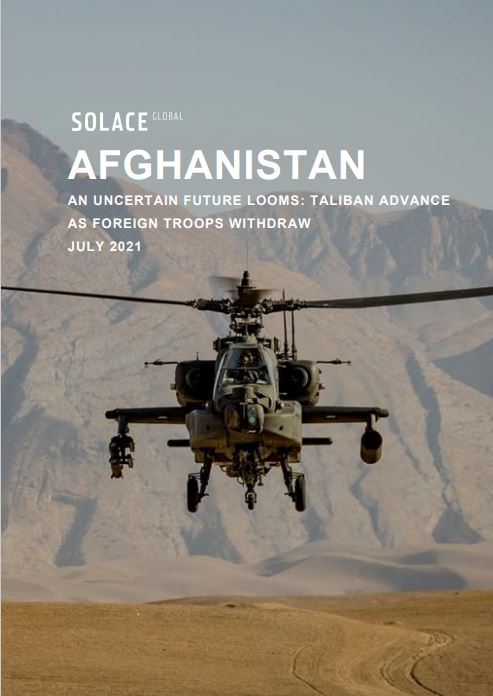 United States and NATO forces are due to depart by 11 September 2021, leaving the Afghan government as the sole defence against the ongoing Taliban insurgency in the country. The US withdrawal is set to leave a central government largely unable to exert control over a country that is slowly falling to Taliban control, with their victory appearing imminent. It remains to be seen if the Afghan government can withstand the militant group’s advance.

This 4-page advisory reviews the developing situation in Afghanistan due to the impending withdrawal of US and NATO forces over the coming weeks, and what may lie ahead for a country faced with such uncertainty.

In recent weeks, clashes between the Islamic fundamentalist group and the Afghan Armed Forces have intensified. Targeted attacks against government and western interests have also escalated in recent months. It is now feared that chaos, a return to a full-scale civil war, or a Taliban victory, will prevail upon the completion of the withdrawal.

As the Taliban inch closer to Kabul, potentially gearing up to take the city, neighbouring nations fear that this precarious situation could spiral into all out civil war, or a much larger insurgency with extremists seizing the opportunity to infiltrate the region. Additionally, it is likely that the ongoing insecurity will lead to a fresh influx of refugees across Afghanistan’s borders. Some of Afghanistan’s neighbours, such as Pakistan, could be further destabilised by a sudden influx of Afghan refugees. At the present time, the situation is evolving swiftly with no sign of an immediate diplomatic solution to prevent a return to an insurgency or civil war.

To request this advisory, please complete this form.