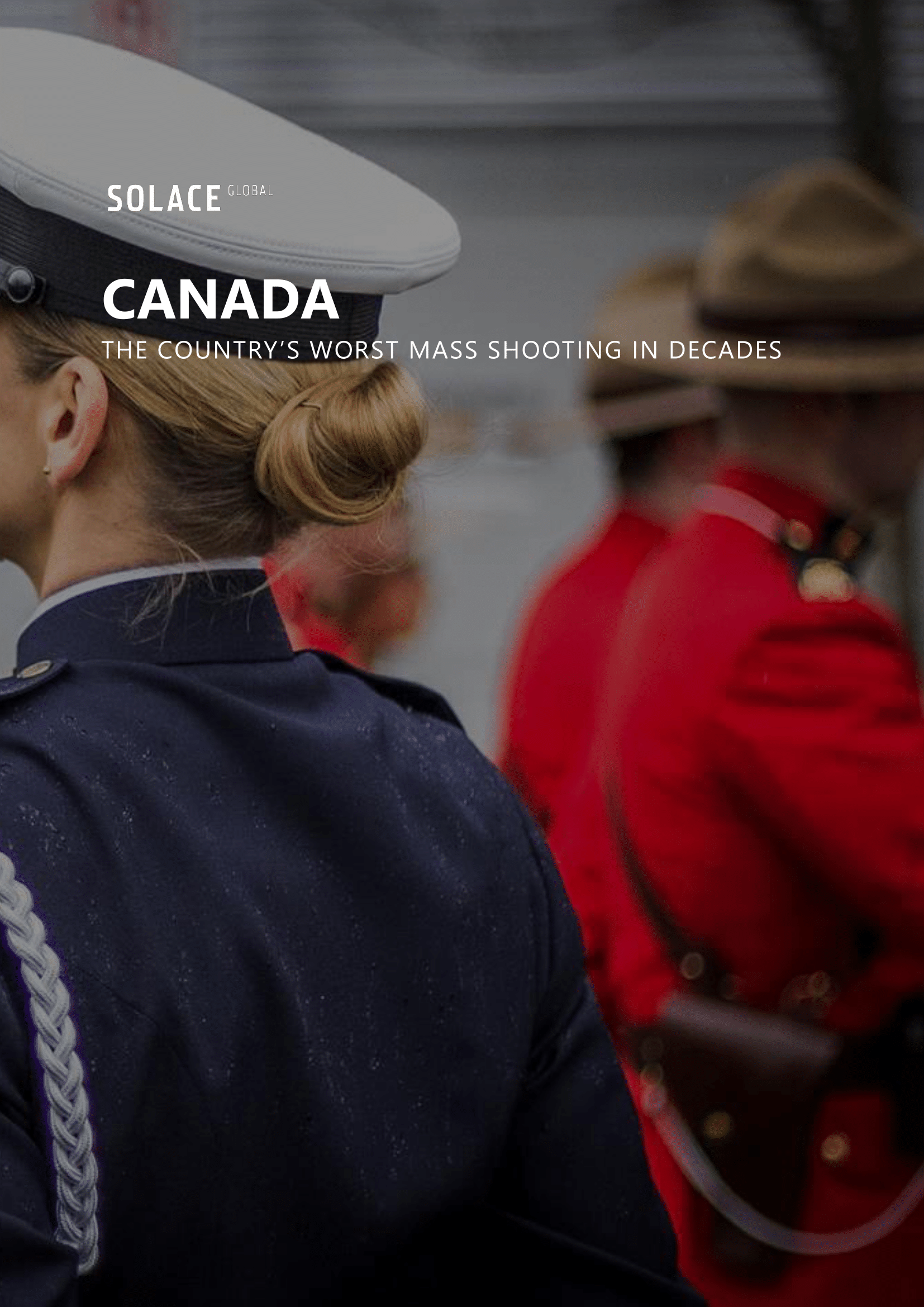 On 18 April, at around 23:00 local time, the Royal Canadian Mounted Police responded to a number of emergency calls in the community of Portapique. This was followed by a 12-hour manhunt across numerous communities in the area before the gunman was shot and killed at a petrol station in Enfield. The attack has resulted in a push by Prime Minister Trudeau to implement stricter gun controls in the country. 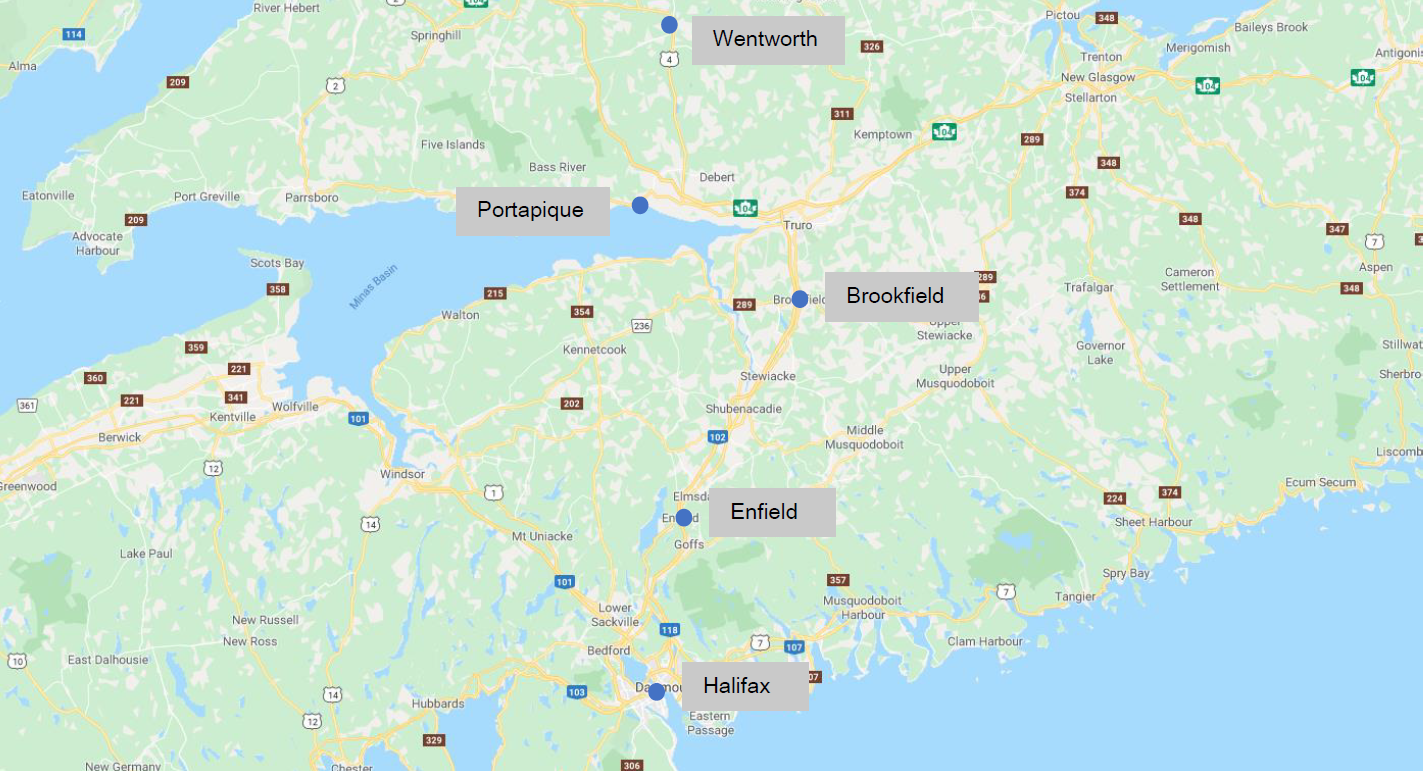 On 18 April, at around 23:00 local time, the Royal Canadian Mounted Police responded to a number of emergency calls in the community of Portapique. This was followed by a 12-hour manhunt across numerous communities in the area before the gunman was shot and killed at a petrol station in Enfield. The attack has resulted in a push by Prime Minister Trudeau to implement stricter gun controls in the country.

On 18 April, at 23:20 local time, after receiving several calls, police responded to reports of gunfire at a private address in Portapique, a small community at approximately 130 kilometres from the provincial capital, Halifax. Officers arrived at the scene and discovered several casualties, including Royal Canadian Mounted Police (RCMP) officer Heidi Stevenson. Furthermore, sources at the scene reported at least two vehicles and some properties on fire. The suspect, later identified as 51-year-old Gabriel Wortman, left the scene and embarked on a 12-hour shooting rampage. A manhunt was launched across multiple communities within a 50 kilometres radius, including in Glenholme, Debert, Brookfield and Milford.

This initial incident was followed, at 08:00 local time, by reports of “an explosion and gunfire” in Wentworth. Two residents were reportedly killed, as was a neighbour who went to render assistance. Another person was then shot and killed while walking in the community of Wentworth Valley, located on the road back to Portapique.

At 09:00 local time, police released the suspect’s identity; they also added that he was reportedly dressed as a member of the RCMP, despite not being an officer, and he was moving around in a silver Chevrolet Tracker disguised as an RCMP vehicle. Through social media posts, authorities advised the public to remain indoors while they considered the Wortman, armed and dangerous. Via Twitter, RCMP stated “to clarify, the suspect in our active shooter investigation, Gabriel Wortman, is NOT employed by the RCMP but he may be wearing an RCMP uniform. He is considered armed and dangerous. If you see him, do NOT approach and call 911 immediately”

Sightings were then reported in the communities of Glenholme, Debert, and Brookfield before, 12 hours later, during late morning hours local time on 19 April, police tracked the assailant at a gas station in Enfield. He was then was shot and killed by responding officers after an exchange of gunfire. On 20 April, RCMP Commissioner Brenda Lucki confirmed that the shooting took the lives of 19 people.

An investigation is underway to establish the motive behind the attack; however, official sources ruled out terrorism as a cause. Police are currently investigating 16 crime scenes over 50 kilometres (30 miles). It is also expected that the death toll will rise as the crime scenes are investigated further. The authorities have also not stated what kind of firearms were used.

Media reports have speculated that the incident may have begun as a case of domestic violence at one of the homes in Portapique, where Wortman was allegedly trying to find a former partner. However, the fact that Wortman has a disguised police vehicle and RCMP uniform indicates that his actions were possibly deliberate.

Such episodes of violence are a rare occurrence in Canada due to tighter gun control legislations compared to neighbouring United States, where the number of shootings is significantly higher. This rampage is the deadliest mass shooting in the country’s recent history with Nova Scotia Premier Stephen McNeil stating, “this is one of the most senseless acts of violence in our province’s history”.

The last mass shooting in the country to result in more than 10 fatalities was the Montreal’s École Polytechnique massacre in 1989 where 14 women were killed when Marc Lepin stormed the school with a semi-automatic rifle. More recently less deadly attacks have occurred, in January 2017, Alexandre Bissonette entered the Quebec City Mosque in the Sainte-Foy neighbourhood of Quebec during evening prayers and opened fire on the gathered worshippers. He was also armed with a semi-automatic rifle as well as a semi-automatic pistol which under Canadian gun laws were restricted items at the time of the shooting, yet could be purchased as long as the buyer could submit valid proof that such weapons were needed. Six people were killed, and 19 others wounded.

Following the attack in Nova Scotia, Canadian Prime Minister Justin Trudeau has promised further gun-control legislation. Obtaining a firearm licence in Canada already includes an extensive regime, made up of thorough background checks as well as practical and medical tests. Gun owners are also subject to frequent examinations and controls. However, Trudeau said while campaigning last year that he wanted to ban assault-style weapons in the country, while also setting up a buyback program for all military-grade weapons that had already been legally purchased. Indeed, legislation was due to be introduced when Parliament was suspended as a result of the current pandemic.

Questions have also been raised as to why police did not make use of Canada’s emergency population warning system, Alert Ready. The police instead relied on twitter to provide updates. Many of the areas impacted do not have reliable access to internet services and are inhabited by a large population of seniors, who are less likely to use social media. Premier Stephen McNeil has stated that a review will be conducted on how the public were alerted and updated about a shooting rampage, but now is not that time.