Bahraini Opposition Use of IEDs

On 05 September 2018, an improvised explosive device (IED) detonated outside Bahrain International Airport. Official sources have not released details of the attack, except to indicate that no casualties were inflicted and that flight operations were temporarily suspended. A group, variously identified as the Islamic Resistance, or Saraya al-Ashtar, claimed responsibility for the attack, describing its purpose as demonstrating their ability to access and target “all sensitive infrastructure”. 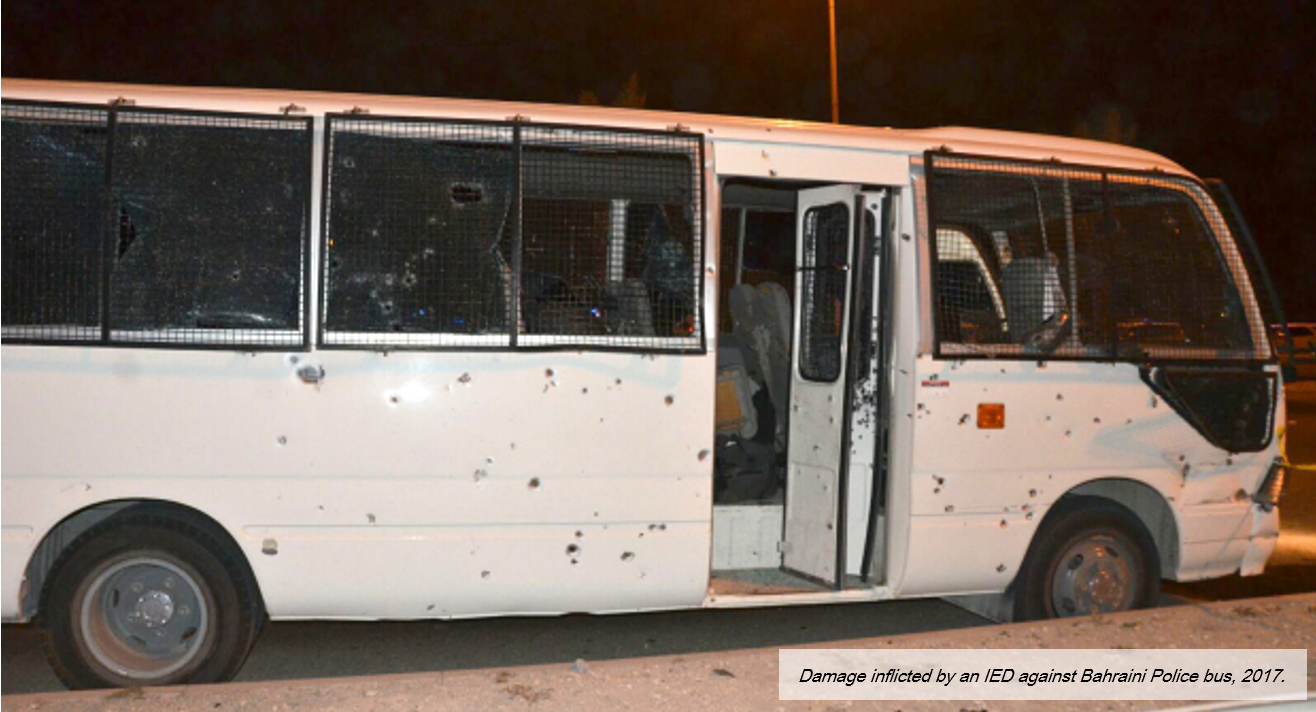 Terrorism: On 05 September 2018, an improvised explosive device (IED) detonated outside Bahrain International Airport. Official sources have not released details of the attack, except to indicate that no casualties were inflicted and that flight operations were temporarily suspended. A group, variously identified as the Islamic Resistance, or Saraya al-Ashtar, claimed responsibility for the attack, describing its purpose as demonstrating their ability to access and target “all sensitive infrastructure”.

106 IED attacks have been conducted in Bahrain since 2011, 50 of which resulted, as in this case, in no casualties or fatalities.

The Islamic Resistance, Saraya al-Ashtar, is one of a series of Shia opposition and terror groups which have conducted attacks throughout Bahrain since the Arab Spring protests in 2011. A number of other groups also operate, sharing the prefix “Saraya”, and it remains unclear whether these groups actually represent the same larger organisation, or simply share branding. In all cases, Bahraini security services and neutral third parties have identified financial and logistical connections to the Iranian Revolutionary Guard Corps (IRGC).

Bahraini demographics and the small nation’s system of government have been key factors in the development of these insurgent groups. Approximately 60 per cent of Bahraini citizens are Shia Muslims, however, the island’s monarchy is Sunni, and opposition groups have either been heavily restricted or banned outright. Additionally, the government actively recruits foreigners of Sunni descent into the security forces in order to provide a further buffer against efforts to develop majority rule. Recruitment materials for these personnel in Pakistan have described the role as a “holy war against Kaffir (unbelievers) in Bahrain”, demonstrating the confrontational nature of sectarian power politics in the country.

Bahrain saw limited unrest as part of the Arab Spring in 2011 and the government responded by deploying the Bahraini army, augmented with troops and armoured vehicles from neighbouring Sunni states to maintain order. These efforts culminated in an operation to disperse the epicentre of the protest and the imposition of a brief state of emergency. Anti-government protests have persisted since but have rarely approached the mass scale of 2011. This short, violent, suppression appears to have had the unintended consequence of driving some opposition activists to seek a violent resolution to Bahrain’s tensions. Terrorist activity has increased steadily since the end of the Arab Spring and Iranian support for their Shia compatriots in Bahrain has also become more active.

IED attacks have demonstrated a clear progression in terms of technical capability since 2011, with early attacks consisting of so-called “sound-bombs”, small pipe-bomb type devices with limited potential to cause harm. These were generally deployed against depopulated areas, such as long and poorly guarded perimeters to government installations as a demonstration of intent.  Devices of a similar size were then used in targeted killings against lone security personnel until 2013.

2014 saw a significant escalation and the establishment of the trend of targeted attacks against security forces. Three police officers were killed in a complex IED attack against their soft-skinned vehicle as they responded to a demonstration in Al Daih in March 2014. The devices were armed remotely and detonated by a motion sensor as the vehicle passed, with three separate charges scattering ball-bearings into the target. The Bahraini government attributed the attack to Saraya al-Ashtar and accused the group of facilitating potential insurgents’ travel to Iran for training in the IRGC’s dedicated camps. Similar devices were have been used in a number of other attacks since 2014, although these resulted in less significant harm.

The most recent wave of bombings, since 2017, has been defined by two trends. Firstly, more sophisticated devices, less dangerous to the user than the early weapons, have been increasingly deployed against security patrols in remote areas. Second, smaller IEDs have been used to conduct targeted killings in the form of “sticky-bombs” applied to the target’s vehicle. This has reflected a wider maturation of insurgent tactics as close-quarter shootings and small-team tactics have also demonstrated increased professionalism and effectiveness.

From this picture, the detonation of the small device at Bahrain airport appears to be an anomaly, using tactics and technology in line with the first, primitive, wave of IED attacks. Despite this apparent backward step, the risk posed by Bahraini insurgents against government personnel should not be discounted. Security forces conducted several raids and seizures throughout 2017 and early 2018 suggesting that insurgent cells successfully produced basic Explosively Formed Projectile (EFP) devices. This type of IED was a signature of Iranian-supported groups in Iraq and used to great effect against the US-led Coalition’s armoured fighting vehicles. These would effectively mitigate the Bahraini security forces’ increased security measures, and their future use is highly likely.

It remains highly unlikely that these attacks will lead to regime change or reform in Bahrain without a significant change in outside factors. The government enjoys the support of numerous western governments, as well as the leaders the Gulf Cooperation Council.

Travellers to Bahrain should remain aware of domestic political tensions, and the potential for further terror attacks. Previous attacks have almost exclusively targeted government or security personnel, and there is no indication of a direct threat posed against civilian foreign nationals.

Where possible, travellers should seek residential locations located away from government or security locations, as these are at greatest risk of being targeted. Additionally, small-scale protests continue to occur on a frequent basis in Bahrain and should be avoided. They frequently result in travel disruption due to the establishment of roadblocks or law enforcement cordons. These protests have previously been used as bait to lure security forces into an attack and in all cases, protesters face the threat of forceful and repressive actions by security forces.

Solace Global would advise clients to employ elevated security measures and a heightened sense of awareness. A locally vetted driver should be used for all travel. Travellers are also advised to utilise travel tracking and intelligence software in order to remain aware of changes to their security environment.