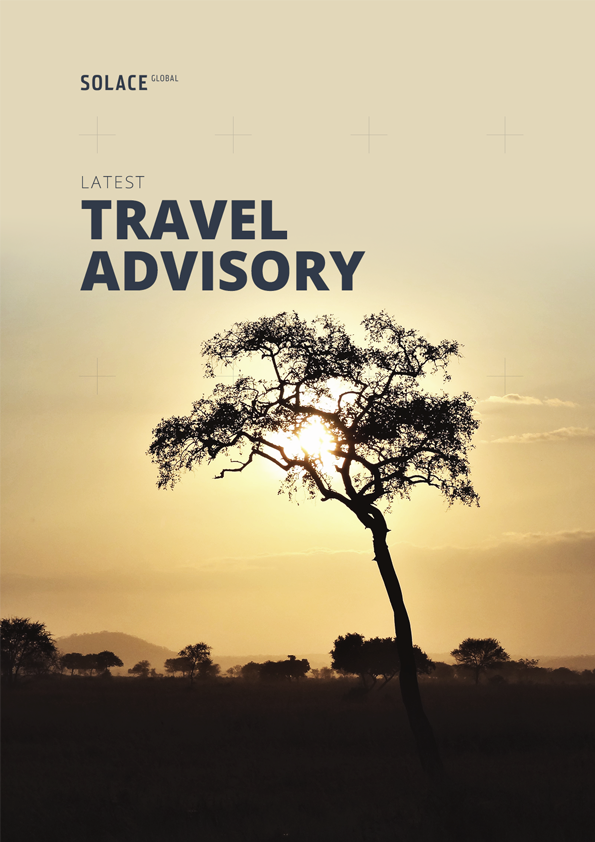 At approximately 4.30 local time on 7 January, a group of soldiers took control of the national radio station in Libreville and broadcast a live statement announcing the implementation of the ‘National Restoration Council’ to restore democracy in Gabon. A government spokesperson has stated that four of the five soldiers have subsequently been arrested and order has been restored. A heavy military presence remains present on Boulevard Triomphal (Quartier Louis). Travellers in Libreville should minimise movement in the city over the coming hours and monitor local and international news sources. A heightened military presence is to be expected in Libreville in the coming days and could result in disruption. 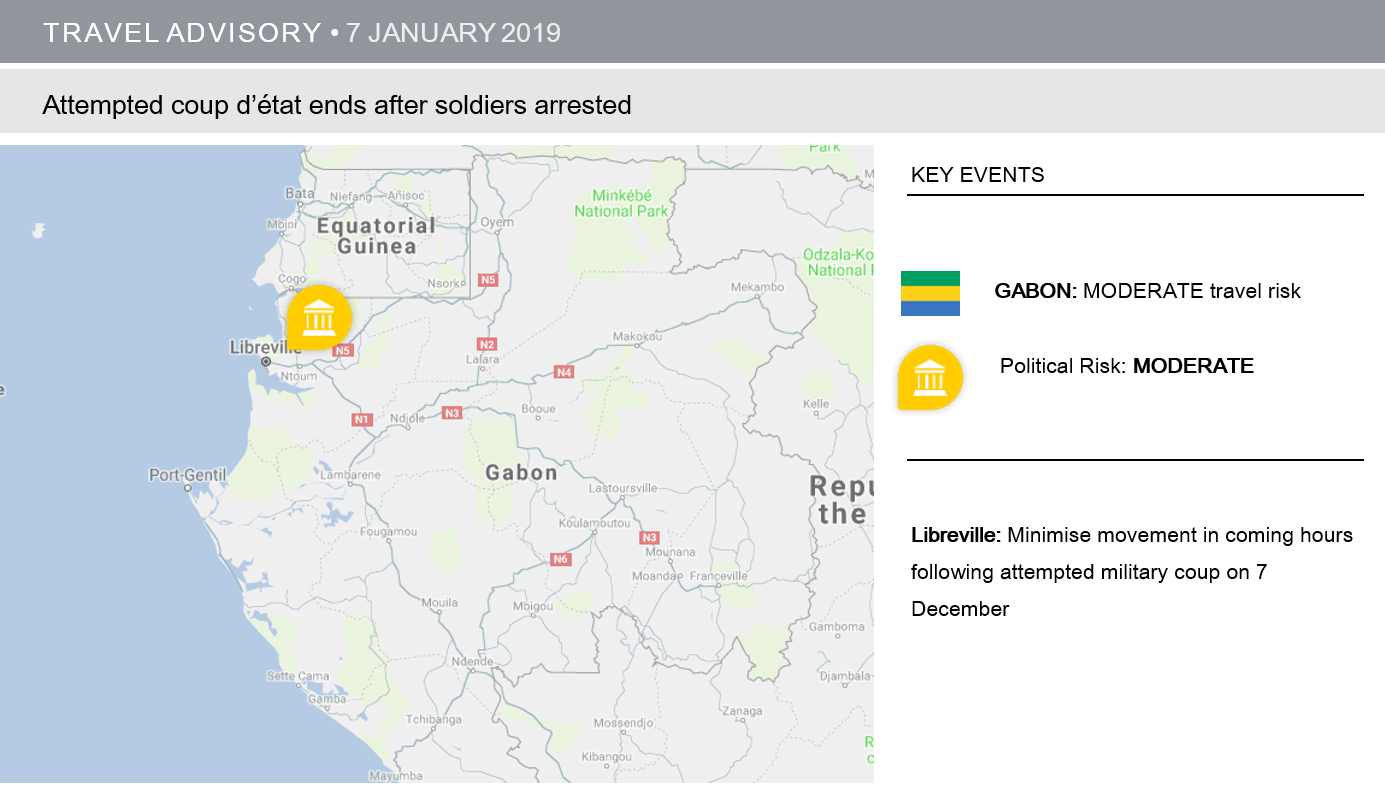 Republic Guard, took control of the national radio station (Radio Télévisée Gabonaise) on Boulevard Triomphal and announced the establishment of a ‘National Restoration Council’ that would replace President Ali Bongo. The statement called for the Gabonese to ‘rise up’ and revolt against the current administration. Around 300 people gathered outside the radio station in support of the soldiers before being dispersed by soldiers who fired tear gas towards the demonstrators. At 8.00 (local time) a government spokesman announced that four of the five soldiers involved in the coup attempt had been arrested while the fifth was on the run.

The coup attempt comes after reports that President Ali Bongo has been out of the country for two months due to ill health, receiving treatment in Saudi Arabia before moving to Morocco for a recovery period. During his New Year’s Day statement to the Gabonese people, President Bongo slurred his words and appeared unable to move his right arm raising doubts as to whether he could carry out his Presidential duties.

Local reports indicate that a heightened military presence is visible throughout the city, especially near high profile areas of the city including the National Assembly. Boulevard Triomphal has been closed to the public and military checkpoints have been established on main roads out of the city. Access to social media and the internet have been cut-off and radio signal and power were briefly cut in some neighbourhoods of the city, although this has now restored. Travellers in-country should minimise movement in Libreville the coming hours. Several embassies are advising their citizens to stand fast in a safe location until the situation fully stabilises.

This mornings attempted coup began with the government-run national radio station broadcasting songs related to the 2016 campaign of opposition leader, Jean Ping, before Lt. Kelly Ondo Obiang, wearing the uniform of the Republican Guard, announced that the self-declared Patriotic Movement of the Defense and Security Forces of Gabon would carry out the responsibility of the President’s office due to the inability of Ali Bongo to carry out his duties as President.  He further invited military and political leaders to meet with him at the National Assembly to discuss the transition of power. The military, still loyal to the President, reacted quickly to the announcement arresting four of the five soldiers at the radio station, sealing off Boulevard Triomphal, retaking the national radio station and securing Gabon’s National Assembly.

The attempted coup comes amidst growing concerns over President Ali Bongo’s ill health and the potential battle for succession.  President Ali remains in Morocco recuperating after being hospitalised in Saudi Arabia in October with some local reports suggesting he had suffered a stroke. The power vacuum that has been left while the President remains out of the country appears to have prompted today’s events with groups seeking to exploit his absence.

The driving force behind today’s coup remains unknown; however, increasing political instability in the country will likely continue while Ali Bongo remains in Morocoo. At present, the ruling Gabonese Democratic Party (PDG) have established a three-person ruling committee to govern the country in the Presidents absence which includes current prime minister Emmanuel Issoze-Ngondet, presidential cabinet director, Brice Laccruche Alihanga and Frederic Bongo, the half-brother of the current president and head of the country’s intelligence service. This committee will stay in place until there is an improvement in the Presidents health or he is considered incapable of delivering his Presidential duties; at which point, the speaker of the house will assume executive authority and elections will be held to determine the new head of state. Within the ruling party there are already factions emerging behind potential candidates with some backing political candidates within the party, seeking a move away from the Bongo dynasty that has ruled Gabon since the 1960s and the nepotism that has dogged the country, while others, often favoured by the ruling family,  are seeking a continuation of the executive power held by the Bongo family.  Both the president’s half-brother, Frederic Bongo, and the president’s son, Noureddin Bongo are considered potential candidates to replace the current incumbent.

The Bongo family have exerted almost complete control over Gabonese politics, business and civil society since 1967. Omar Bongo, Ali’s father, was President of Gabon for 42 years until his death in 2009 at which time Ali succeeded him. Omar, who had a close relationship with the French government, was dogged by allegations of corruption and squandering much of the country’s oil wealth.  While Ali initially brought reform, and the return to a more democratic process, political tensions were heightened in the 2016 presidential election that was widely condemned by international observers as fraudulent. Violent protests followed the election in Libreville resulting in two days of widespread clashes between supporters of the main opposition candidate, Jean Ping, and security forces. Fifty died in the violence and over 1000 people were arrested including several opposition politicians.  Many in Gabon remain aggrieved following the allegations of vote rigging and corruption.  One third of Gabon’s population live in absolute poverty and unemployment exceeds 20 percent despite the per capita income being four times larger than most sub-Saharan countries.

The coup attempt has also coincided with the deployment of 80 American soldiers to Libreville to support with the potential evacuation of US nationals from the Democratic Republic of the Congo if the security situation deteriorates following the election.

Individuals currently in or travelling to Gabon should take additional travel precautions in the coming days, ensuring they have adequate communication, contingency plans as well as access to up to date alerting on the country. While the current situation is stabilising, the wider implications suggest increasing political uncertainty in the coming months and other groups may attempt to seize power in the Presidents absence.