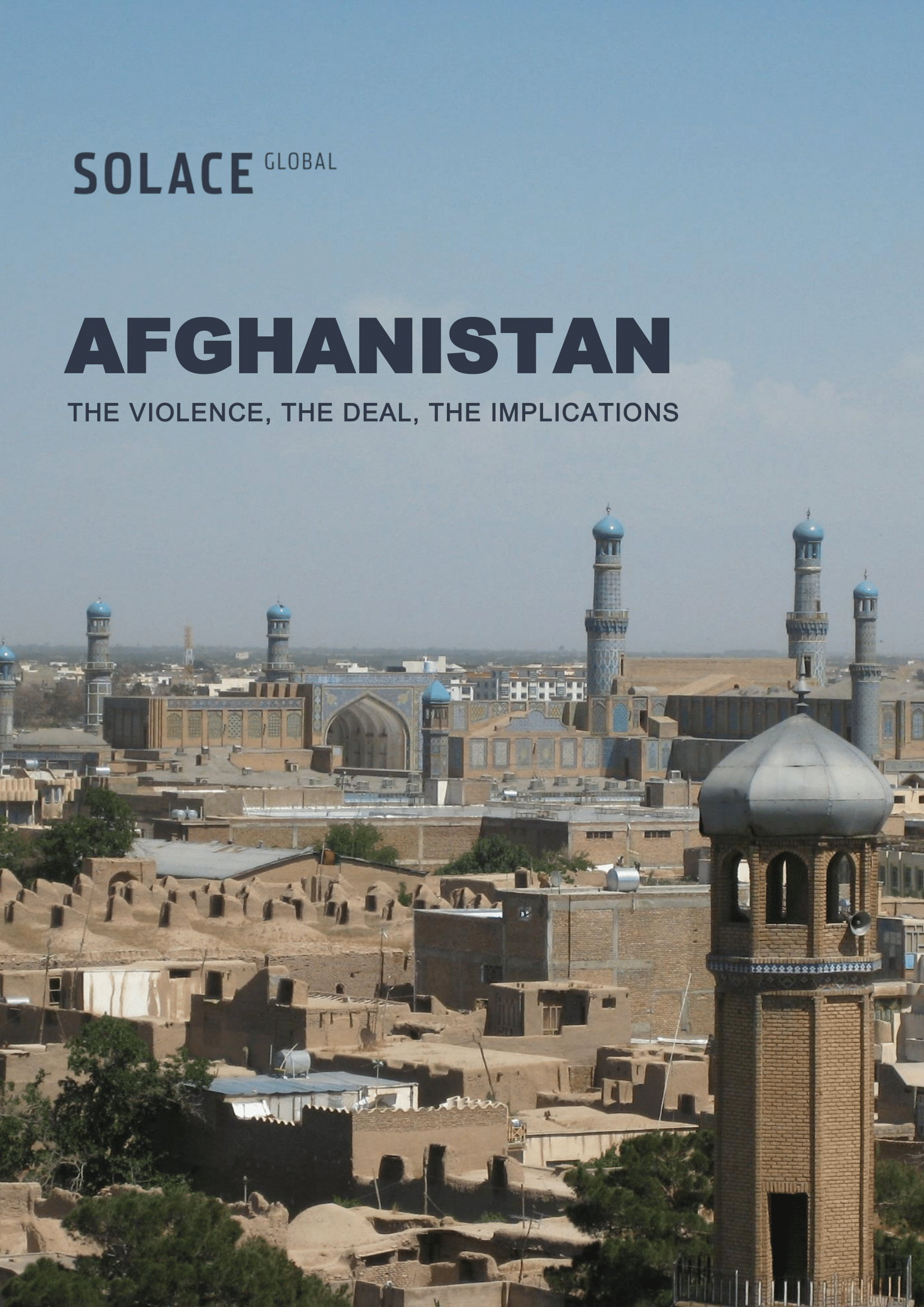 Afghanistan: The Deal, The Violence, The Implications

Coupled with the ongoing electoral campaigning, traditionally characterised by widespread violence and bombing campaigns perpetrated by the Taliban and their allies, the current ongoing peace negotiation process is highly likely to build the momentum for further terror attacks and warfare efforts.

The 17 August saw the deadliest episode of terrorist violence against civilians in Afghanistan this year, when a suicide bomber walked onto the stage of a wedding celebration in Kabul attended by hundreds and detonated explosives. The death toll of the attack has now reached 80, with hundreds also injured, many of whom women and children. This was one of the many attacks targeting specifically the Shia Hazara ethno-religious group and has officially been claimed by the Islamic State cell currently operating in Afghanistan: the Islamic State of Khorasan Province (ISKP), based in the Nangarhar province and counting up to 4,000 foreign terrorist fighters.

Afghan President Ashraf Ghani strongly denounced the bombing and the lack of security measures in the capital, which seemed to be unable to prevent the attack. The deliberate targeting of Shia wedding halls, mosques and cultural centres are now becoming a growing trend among the Islamic State insurgency in Afghanistan. With a previous attack only taking place on 12 July in Nangarhar was also claimed by the jihadist group.

Since 2016, the so-called Islamic State have deliberately targeted the Hazara Shia community in a sectarian jihadist campaign that has occasionally been supported by the Taliban. This latest suicide bombing marks an escalation in violence in the country that coincides with what could be a historical transition for Afghanistan; the Afghani Presidential elections are scheduled to take place on 28 September and the possible conclusion of the bilateral peace negotiations currently ongoing between the United States and the Taliban. The outcome of both these events will be key in determining the future of the country, particularly as the withdrawal the remaining 14,000 US troops from Afghanistan has been determined by the Taliban as a non-negotiable condition to end their insurgency as well as any covert support of Islamic militant factions.

Since the start of the negotiations of a peace deal that has the declared objective of bringing stability and security to the Afghan population, the country has seen a significant increase in violence perpetrated by both the Taliban and the other jihadist insurgents, as demonstrated by the most recent suicide attack. Only two days after the abovementioned terror action, numerous bombing occurred in Jalalabad during the celebrations of the 100th year anniversary of Afghanistan’s independence from British rule. The ten explosions, which took place in key markets and squares of the eastern Afghan city, killed 19 people and wounded 66 others.

In addition to the terror attacks, the ongoing fighting between the US-backed Afghan forces and the Taliban has killed or injured almost 4,000 civilians in the first half of 2019 alone. This has led the United Nations to declare the level of casualties as “shocking and unacceptable”. Additionally, 2018, was also reportedly the deadliest for civilians since the start of the war in 2001. As a result of the violence, discontent is rising among the local population and, in particular, the Shia Hazara minority, over the fundamental contradiction between the Taliban’s declared commitment to reduce violence and the evident insecurity in the country.

Despite this, both the Taliban and the ISKP share the responsibility for the increase in violence levels, their strategic objectives are fundamentally different and only partially addressed in the ongoing bilateral peace talks between the US and the Taliban. In addition to that, after decades of war, the continuously shifting powers and lack of governance throughout Afghanistan has become the theatre of a complex network of ethnic and sectarian factions and conflicts.

The attacks perpetrated by the Taliban, which include several bombings and ground assaults in the capital, need to be understood in the context of their continuous effort to gain advantages in the ongoing negotiations. While the lack of security could be seen as their failure to comply with the dialogue’s agreed framework, the Taliban remain aware of the fact that their success against the US-led military campaign is the main reason that brought their opponent to the negotiating table in the first place. Now that the concrete and final terms of the ceasefire are being defined, their violent campaigns likely represent an attempt to gain additional leverage in the definition of Afghanistan’s future and their role within it.

On the other hand, the perpetrators of the deadliest attacks against civilian targets in recent time and, in particular, the Hazara Shia minority, is the Islamic State of Khorasan Province (ISKP). Their resurgence in the country coincided with the defeat of the IS caliphate in Syria and Iraq, which lead to other areas of insurgency, such as Afghanistan and the African Sahel, to become more important to their quest for territory.

The ISKP have been conducting a lethal bombing campaign against the Shia minorities in Afghanistan, intending to instigate a sectarian war in a country, where traditionally the Sunni majority and the Shia minority coexisted without open violence. Through this violent campaign, which seems to be escalating as the peace negotiation progresses, the ISKP is looking to further weaken the already deficient rule of law and any serious attempt towards institution building. While also attempting to attract the most radical membership of the Taliban that might be angered by the willingness of their leadership to sit down with the American opponent. All this is leading to the ISKP to strengthen its eastern enclave.

Coupled with the ongoing electoral campaigning, traditionally characterised by widespread violence and bombing campaigns perpetrated by the Taliban and their allies, the negotiation process is highly likely to build the momentum for further terror attacks and warfare efforts.

The Afghan peace deal first emerged in the international narrative in October 2018, a year that marked a radical policy shift in the US strategic approach towards the country and its insurgency. Locked in a seemly never-ending impasse with Taliban forces, US President Donald Trump decided to bring the opposing faction to the table in order to negotiate a ceasefire and achieve a “comprehensive peace deal” for the future of Afghanistan.

While the Taliban have agreed to discuss a solution to the conflict, they also rejected any participation of the US-backed government in Kabul, with whom the group have repeatedly refused to negotiate with, deeming it simply a foreign puppet with no domestic legitimacy. The first signs of concrete progress were first announced in January 2019, when the US Special Representative Zalmay Khalilzad declared that the Taliban have agreed to terms deemed satisfactory by the American government, marking the first real step towards a ceasefire. 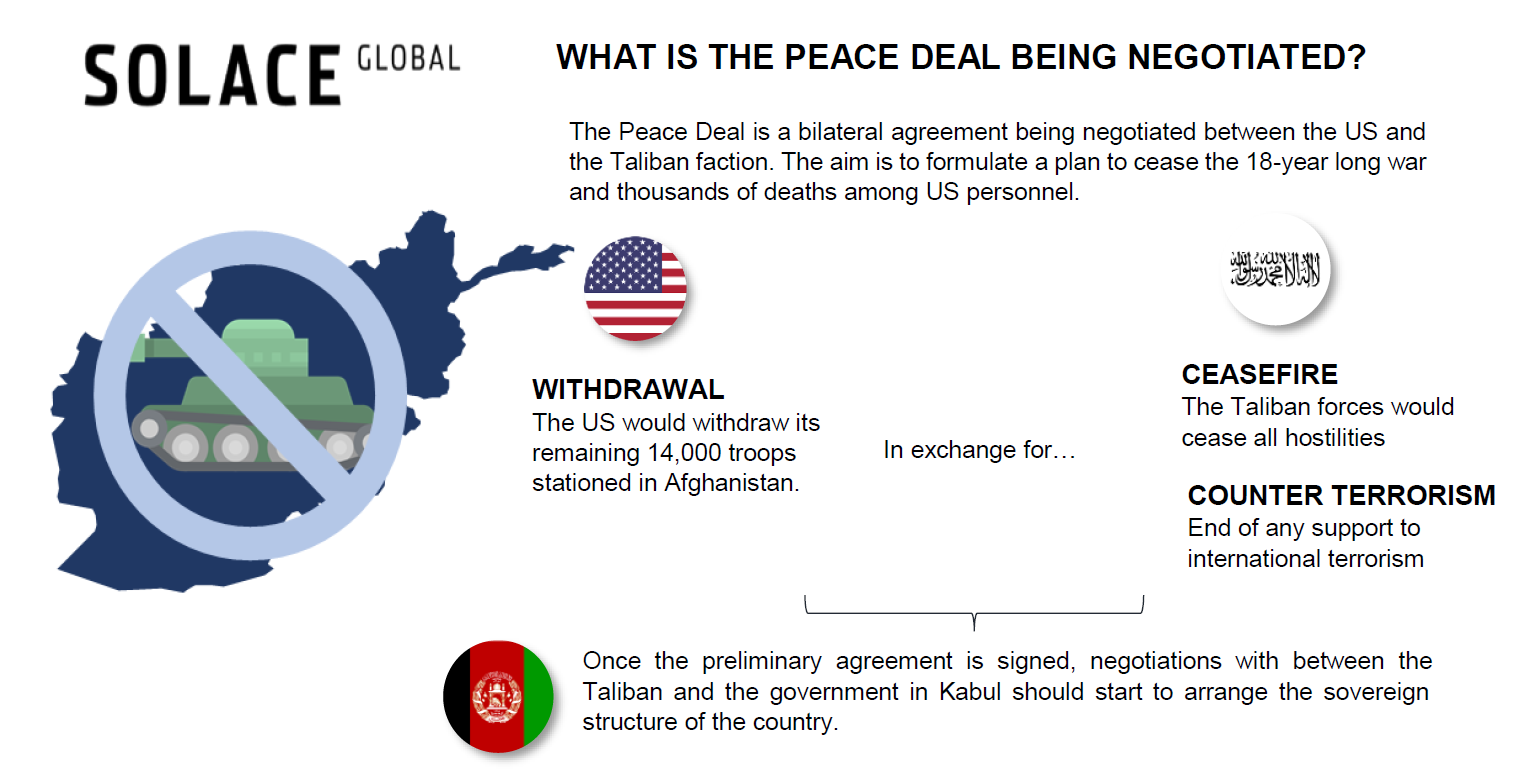 Regular meetings have been held since October last year in Doha, Qatar, and both sides have recently expressed hope that the agreement is close to being finalised, with the provisional end date sometime in September. However, while the main framework of the deal has reportedly been agreed upon, the details of its implementation remain either vague, unaddressed or still in contention. For instance, the Taliban insist on the immediate withdrawal of the US and NATO troops after the signature of the agreement, while only offering vague commitments towards the subsequent negotiation with the Kabul government, which is paramount for a sustainable plan moving forward. Many critics, including US officials, have expressed concerns over the fact that giving excessive leverage to the Taliban might be perceived as their victory in the war and further embolden their ambition of governing Afghanistan.

While the deal would undoubtedly represent a landmark moment in the longest conflict in American history, it remains heavily flawed, and it hardly resembles a plan to determine the future of post-war Afghanistan.

The comprehensive nature of the peace deal currently being drafted is fundamentally questioned by the absence of one of the major players, the Kabul government, from the negotiating table. The refusal by the Taliban of recognising its legitimacy and sovereignty is an important indicator of the situation that an American withdrawal would create at this stage. The promise of future inter-Afghani negotiation is both vague and holds no guarantee of US access or mediation, which will greatly increase Taliban leverage over a government that would have lost the armed backing of the western military contingent.

American negotiating officials have repeatedly stated that the aim of the talks is a comprehensive peace deal for Afghanistan, one that will be able to bring all sides in agreement without compromising the political and humanitarian progress that was achieved through years of investment into nation-building. However, many fear that electoral promises could motivate a decision to prioritise military disengagement and withdrawal over a sustainable deal, particularly vis-a-vis the growing human losses produced by the incessant violence and the upcoming 2020 US Presidential election.

Therefore, a hasty withdrawal of the US and NATO forces in the absence of a well-defined transitional plan and measurable guarantees is likely to lead to the collapse of the governing institutional structure. Moreover, simply assuming that the process will lead to the normalisation of the Taliban leadership in the democratic governmental institutions overlooks the guiding ideology of the Taliban, which promotes the establishment of an Islamic state ruled through Sharia Law.

In this sense, the sustainability of the agreed-upon framework becomes a fundamental question moving forward: a system to reliably “trust, but verify” and retaliate in case of non-compliance needs to be in place before the military leverage that was key in inducing the Taliban into negotiation is removed.