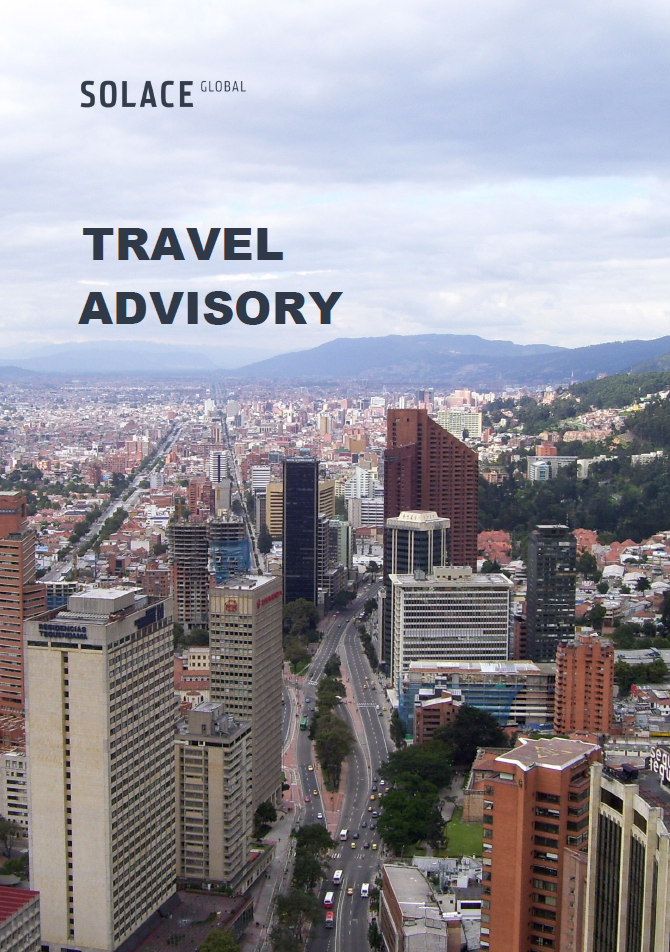 At approximately 09.30 (local time) on 17 January, a man drove a car filled with explosives into the National Police Head Academy compound in the southern suburbs of Bogota city resulting in the death of 21 people and over 65 others injured. The National Liberation Army (ELN) has claimed the attack as a reprisal for the Colombian government’s failure to adhere to the ceasefire and called it a legitimate act of war. The government has retorted this claim, calling the attack an act of terrorism. While travel to Bogota can continue – travellers should remain vigilant following renewed threats from the ELN of further attacks, and minimise time spent near potential targets, including police and military installations as well as government buildings.

Terrorism: On the morning of 17 January, a man drove a car into the National Police Academy which was holding a passing out parade for graduating police officers. When stopped and questioned at a checkpoint just inside the compound, the driver accelerated through the checkpoint, ramming the car into a wall before detonating 80kg (176lb) of explosives. The blast killed 21 people including the attacker and is the most fatal militant incident to occur in the country in the last 16 years.  Colombia has experienced relative calm following the 2016 peace accord that ended the longstanding conflict between the government and Marxist rebel group Revolutionary Armed Forces of Colombia (FARC).

The National Liberation Army (ELN), who are considered the last active militant group in the country, claimed responsibility for the attack on 20 January, releasing a statement saying the blast was in response to the government’s failure to respect a unilateral ceasefire that was declared over Christmas. Peace talks were being held in Havana, Cuba before being suspended as a result of the car bomb – the government are now demanding that ELN leaders in Havana are returned to Columbia to face trial. Protests occurred in Bogota following the attack with demonstrators demanding peace and chanting “no to terrorism”. Columbian President, Ivan Duque described the attack as an act of “crazed terrorism” and vowed to hold to account those responsible for the blast while ruling out any further peace talks with the ELN.

Travel to Columbia can continue, but those personnel in-country in the coming weeks should remain vigilant to the threat posed by militant groups. The attack does not represent an immediate return to previous hostilities between the two groups; however, it is a step backwards in the peace process and could trigger a resurgence of small-scale attacks. The protests that occurred in the days following the attack indicate the lack of support that armed groups are able to garner from civil society, lessening the potential for anything more than localised attacks against security forces and the government. Protests could cause disruption in major transports hubs in the coming days and all demonstrations should be avoided as a precaution.

Colombia has had a history of large-scale attacks from decades of conflict with drug cartels and left-wing militant groups such as the ELN and the FARC. However, the regularity of attacks has significantly decreased in recent years, with only a number of more minor attacks in 2017 and early 2018. Last weeks incident, on one of the most secure areas in the city, has brought back memories of an extremely violent past when such tactics were used by militia groups, resulting in the death of thousands of Colombians.

Despite the attack, successful peace talks in 2017 with FARC has seen an almost total disarmament of the country’s largest militant group. Members of the group have also been included into the country’s political process. As a result of this and of the deal struck in 2017, the widely unpopular FARC political party holds a small number of seats in parliament. However, these talks failed to secure a deal with the ELN, who are still active. The talks were marred by a number of small attacks in more rural areas from splinter members of the group who do not wish the talks to take place.

The relative peace with these two major militant groups had been hard won over a long period of time and the guerrilla group, Colombia’s last, had begun final peace talks in Cuba with the Colombian government in 2017. However, these talks were suspended last year when President Duque took office and demanded that the ELN free all hostages. Bogota has, since the attack, increased pressure on Havana to hand over the ELN leaders that participated in the peace talks and remain in Cuba waiting for a possible restart of negotiations. Cuba has, thus far, resisted this pressure. The widespread unrest that followed the attack is likely to prompt the government to seek resolution in the long term rather than further antagonising armed actors.

Protests have already occurred in the capital following the attack, demanding peace and chanting “no to terrorism”. At this time, the public outcry has been mainly directed at the perpetrators and called for an end to the violence against the police and the army. However, there is public pressure on the government to be more severe with the ELN ever since the FARC peace deal. The peace deal with the FARC was incredibly unpopular, as many thought it allowed the group off too lightly. The latest attack will only increase this pressure putting further strain on any potential peace offer.

The delay in which it took the ELN to claim the attack points toward a potential split or disagreement in the rebel group. Past instances have seen the ELN or FARC claim attacks within hours of the attack. The group has since claimed the attack stating that it was a reprisal on the Colombian government for failing to respect a unilateral ceasefire declared by the rebels over Christmas. As a result of the attack, and despite the unrest caused by the demonstrations, the peace process in the country could now be halted for an extended period of time. Additionally, importantly for business travellers, the attack could lead to a deterioration in the security environment throughout the country.