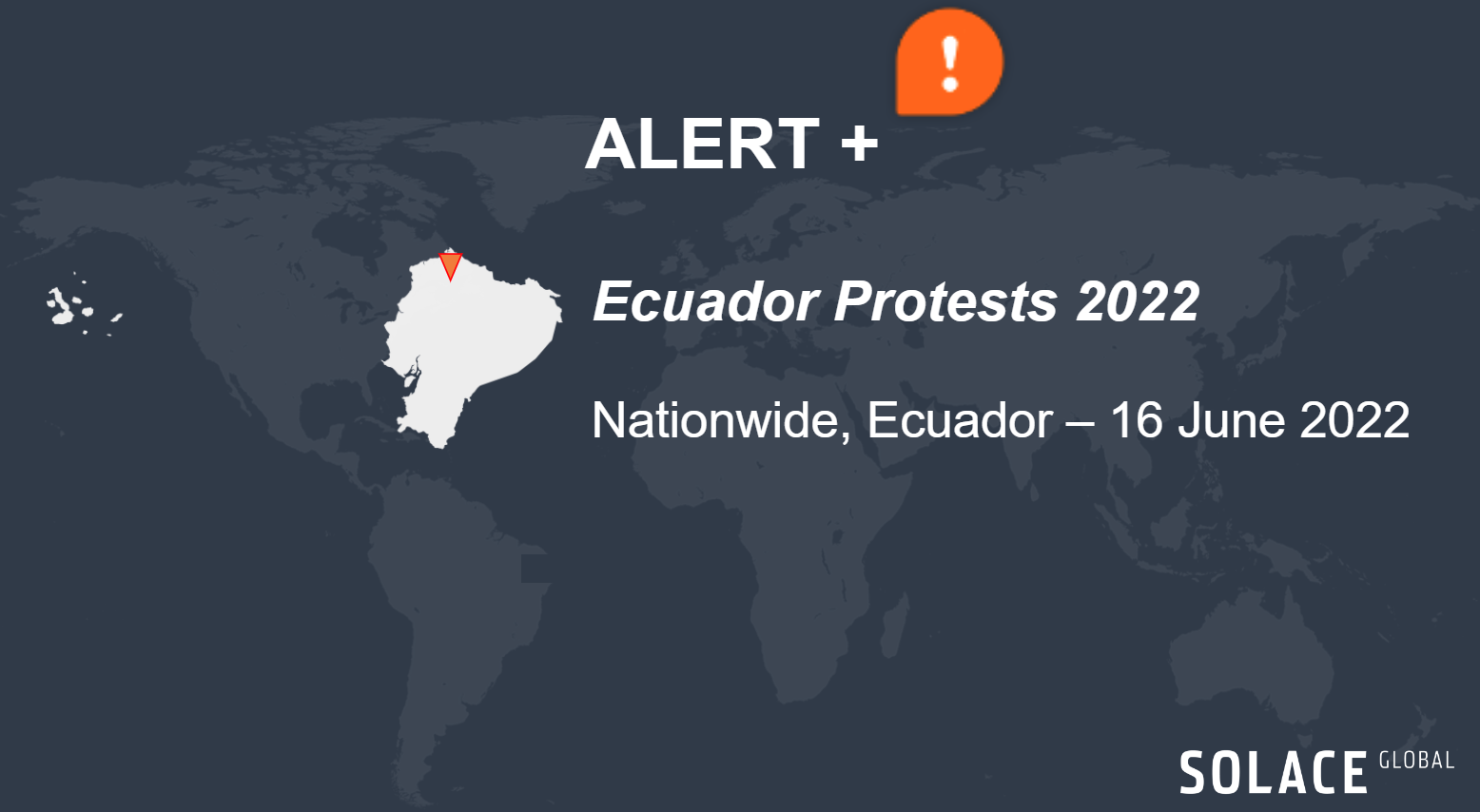 SITUATION SUMMARY On 12 June large scale protests were organised by the powerful Confederation of Indigenous Nationalities of Ecuador (CONAIE). These protests are about Ecuador’s rising cost of living and high inflation, in particular the rising cost of fuel. The country has seen demonstrators block roads with burning tires and barricades of sands, rocks and tree branches. Routes in and out of the capital city, Quito, have been blocked, whilst in the capital police vehicles have been set alight. The protests have been severe enough to disrupt some public services and the functioning of some economic sectors. For example, state oil company Petroecuador has had to halt operations at its facilities as a result of the unrest. On 14 June it was reported that the President of CONAIE, Leonidas Iza, had been arrested on charges of “inciting protests” and “sabotage”. His arrest only further inflamed the situation with a spokesperson for CONAIE stating that there would be a “deepening of the struggle” and a “radicalization of the great indigenous and popular uprising”. The arrest saw hundreds of indigenous activists gather outside a military base in Latacunga where he had been taken. After riot police clashed with protestors, overnight on, it was announced on 15 June that Mr Iza had been released. He will still be charged and will face up to three years in prison. Despite his release, CONAIE are continuing to call for widespread protests across the country to continue. At the time of writing the protests have affected at least 10 of Ecuador’s provinces plus the capital. SOLACE GLOBAL COMMENT As stated, the protests were called for by CONAIE, to protest the rising cost of living, and in particular the rising cost of fuel. Recent months have seen Ecuador face mounting economic issues, such as rising inflation, rising unemployment, and rising poverty. In tandem to this, protestors are also aggrieved that the government has yet to address issues with the country’s price controls on agricultural products and have not acted on electoral promises to rollback mining concessions granted in Indigenous territories, create more jobs, and renegotiate farmers’ debts with banks. Given that over one million people in the country are indigenous peoples, CONAIE can be a powerful political and social force. Indeed, protests organized by CONAIE have directly led to the downfall of three Ecuadorian presidents between 1997 and 2005. In recent years to try and stave of that fate, the current Conservative government led by President Lasso has held several rounds of talks with CONAIE on some the economic and social issues. These talks have ultimately produced little of substance for either Lasso or CONAIE, and this combined with the mounting economic problems have led to the calls by CONAIE for protests and demonstrations. In at least releasing Mr Iza less than 24 hours after his arrest, the government likely realized that was a course of action which only served to inflame the situation. It is unlikely that the government will be able to swiftly create better economic conditions, and as such discontent is likely to continue into the short to medium term, however the threat of further protest action could be dissipated through good faith offers of talks and negotiations between the government and CONAIE. SOLACE GLOBAL ADVICE Solace Global remains available to provide the full range of Travel Risk Management services to clients. Solace Global is also able to provide comprehensive crisis management, response, and evacuation services. For further details please contact +44 (0) 1202 308 810 or email us.