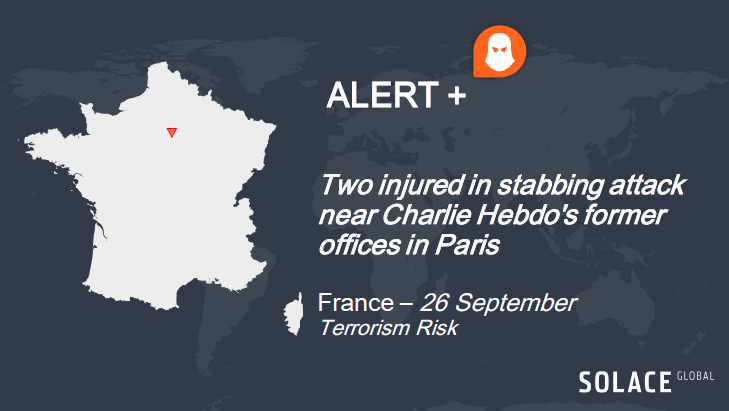 On 25 September, two people were reportedly injured, one seriously, in a knife attack in the French capital, Paris. The incident occurred near the former offices of the satirical newspaper Charlie Hebdo. The victims are reported to be journalists working for Premières Lignes. ​

It is understood that the two victims were taking a cigarette break when the attacker assaulted them at random with a long-bladed weapon, believed to be a machete or meat cleaver. According to police sources, the weapon was discarded at the scene. The assailant was then arrested nearby outside the Bastille Opera, reportedly covered in blood.​

At the time of writing the motive for the attack is unconfirmed, however, French interior minister, Gérald Darmanin, has stated that there is ‘little doubt’ that the attack is terrorism. French terrorism police are investigating the incident. ​

Media sources have stated that the assailant is an 18 years old man allegedly from Pakistan. Sources also reported that he had been arrested a month ago for carrying a screwdriver but was not known to the police for Islamic radicalization. At the time of writing, a further seven individuals are in custody in connection with the attack. ​

Additionally, a security cordon was set up temporarily after a suspicious package was identified by police. This was cleared shortly after when it was confirmed that there were no explosives present. ​

The incident occurred at around midday along rue Nicolas Appert in the capital’s 11th arrondissement, the same scene as the mass shooting at the Charlie Hebdo offices in 2015, which left 17 people dead.​

It is highly likely that yesterday’s attack is linked to the Charlie Hebdo attacks of 2015, given the location, outside the magazine’s then offices. Additionally, the reactions of Islamic terrorist groups to the recent decisions made by the magazine to republish cartoons depicting the Prophet Muhammad led to groups such as Al-Qaeda to make explicit threats.​

In 2015 the French capital suffered a number of attacks, including the attack on the Charlie Hebdo offices and, on 13 November 2015, multiple attacks across Paris and Saint-Denis left 130 civilians dead and a further 400 injured.​

Attacks have not been limited to the capital. Notably, on 14 July 2016, a truck was driven through the main seafront promenade in Nice during Bastille Day celebrations, killing 84 people.​

In the wake of the January 2015 attacks, the French government implemented a wealth of measures, including a continuously extended State of Emergency, that extended the state capabilities to respond to attacks but did receive criticism for inadvertent legislative repercussions and threats to personal freedoms and privacy. ​

At this time, it is unlikely that France will look to reimplement the State of Emergency; however, further attacks cannot be ruled out. Attacks on Charlie Hebdo remain highly likely given the current trial over the 2015 incident and the decision to republish offensive material.​

Regardless of the motive of the attack, individuals should follow similar advice regardless of an assailant’s motives.​

Terror attacks in France are likely to be perpetrated by self-radicalised individuals using low-tech means, such as knives and vehicles. Attacks could occur with little warning and may be indiscriminate.