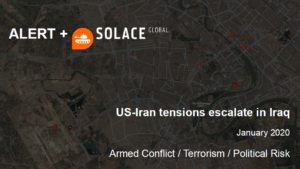 On 3 January, the Pentagon confirmed a targeted airstrike had been conducted at Baghdad International Airport. The target of the strike was one of Iran’s most powerful commanders, General Qasem Soleimani, who spearheaded Iran’s elite Quds force and their operations throughout the Middle East. The airstrikes resulted in seven killed, including the deputy commander of the Iraqi Popular Mobilization Forces (PMF), Abu Mahdi al-Muhandis.

The Pentagon has attributed numerous attacks on coalition bases in Iraq in recent months to the Iranian General, and conducted the airstrike as a “decisive defensive action to protect US personnel abroad” and to deter “future Iranian attack plans”. The Green Zone in Baghdad was locked down by Iraqi security forces after the attack to prevent further immediate escalations in tensions. There were reports of celebrations in Tahrir Square by anti-government groups in Iraq, who by and large oppose Iranian involvement in Iraqi affairs.

Iran has responded calling the airstrike an “act of international terrorism” and a “foolish escalation” amid current tensions between the two powers. The Iranian government has indicated that it considers the US strike to be a targeted assassination and that it will retaliate. Three days of national mourning have been announced in Iran.

The Iraqi Prime Minister has stated he considers the assassination of Muhandis an “attack on the Iraqi state, government and people”. The Pentagon has confirmed that US President Donald ordered the strike in response to intelligence suggesting that Soleimani was planning attacks against US forces; the deployment of approximately 750 US soldiers to the Middle East had already been announced but may be increased.

The assassination airstrike occurs in a context of escalating reprisal actions in Iraq between the US and Iran. On 29 December 2019, a coordinated series of US airstrikes in Iraq and Syria targeted Iran-backed Iraqi militia group Kataib Hezbollah (KH), part of the Iraq’s Popular Mobilisation Forces (PMF), killing at least 25 militants. These strikes followed the death of an American contractor when dozens of rockets, fired by KH, hit an Iraqi military base. In response, the KH leadership vowed a robust response targeted at US forces in Iraq. The Iraqi government strongly condemned the airstrikes, characterising them as a violation of sovereignty.

Protests were sparked on 31 December outside the US Embassy compound in Baghdad’s ‘Green Zone’ following the funerals of KH fighters who had been killed. Supporters of KH and other Shi’ite PMF units rallied outside the embassy. Protesters attacked the compound, breaking down the gates and setting fires at the facility, forcing the withdrawal of all but security staff who fired tear gas. The demonstrators remained in place until 1 January when, following the deployment of hundreds of additional US troops to the embassy compound, they withdrew.

The assassination airstrike represents a significant escalation and is likely to provoke a strong reaction both from Iran and its proxy forces in the Middle East. There is heightened potential for a resumption of anti-Western protests in Baghdad, along with an upsurge in Iranian-backed militant activity regionally. The US Defense Secretary has stated further militia attacks are expected and the US reserves the right to take preemptive action to prevent them. In the midst of Iranian and US actions, Iraq remains fragile with a fractured political and sectarian society, and a growing concern of a resurgence of extremist groups, such as the Islamic State. There is a strong likelihood Iraq will become more unstable in the coming days and weeks.