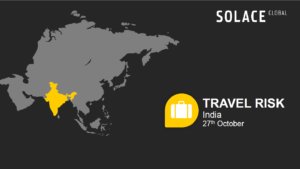 Diwali, also know as Deepavali, is the annual Hindu festival of light that celebrates the spiritual victory of good over evil, and light over dark. In the days leading up to and during the festivity, people decorate their homes with colourful decorations and oil lamps, called diyas.

Festivities last for five days and the date is calculated according to the Hindu lunar calendar. This religious festival also marks the beginning of the Hindu New Year and it usually falls between October and November; this year’s date is Sunday 27 October.

Diwali is celebrated largely in India (mainly in northern regions) where it is the most important holiday on the calendar, originating as a harvest festival. Each region has its own traditions and practices as well as deities, though, some elements are common everywhere.

In India, the most popular places to experience Diwali are Delhi, Jaipur, Amritsar, Varanasi, and Kolkata. The festival of light is also observed in Bali, Fiji, Guyana, Pakistan, Malaysia, Mauritius, Myanmar, Nepal, Singapore, Sri Lanka, Suriname and Trinidad & Tobago. Public events also take place in countries that have a large Indian population such as the United Kingdom and on many Caribbean islands.

Although Diwali is considered peaceful and is popular among various cultures there do remain several potential risks.

The most prominent threat to travellers is petty criminality. During festivities, the large crowds allow pickpockets to  operate freely.

Environmentalist demonstrations against the tradition have occurred in the past over the amount of smog that the number of firecrackers produces. Despite this, protests are normally small in size and often cause minimal disruption, especially when compared to the actual event. Minor injuries from stray crackers have been reported over the years.

Due to the event’s high-profile nature, there is a risk that terrorist groups may target festival celebrations. While terrorist groups mainly focus attacks on the Indian government and Indian military personnel, attacks on areas frequented by westerners and religious festivals cannot be ruled out. Diwali festivities last fell victim to such attacks in 2005, attacks were also attempted and foiled in 2011.

On 23 September 2019, local media reports stated that insurgent groups from Jammu and Kashmir and Pakistan were planning to target this years Diwali, these reports have not been verified by official sources at this time.