The 2019 Rugby World Cup is set to kick off on 20 September in Japan. This is the first time the tournament will be held in Asia, and outside of the traditional heartland of the Rugby Union. For many people, this will be their first experience of Japan and while one of the safest countries in the world, its culture is vastly different. Travellers are likely to find the cultural differences and the language barrier the greatest challenge whilst visiting the country. Despite this, there are some very real risks in Japan, these almost exclusively come in the form of environmental threats. The island nation faces numerous earthquakes and typhoons; however, the country’s infrastructure is well developed and prepared for such events – making only catastrophic, and rare, events a risk to those in the country. 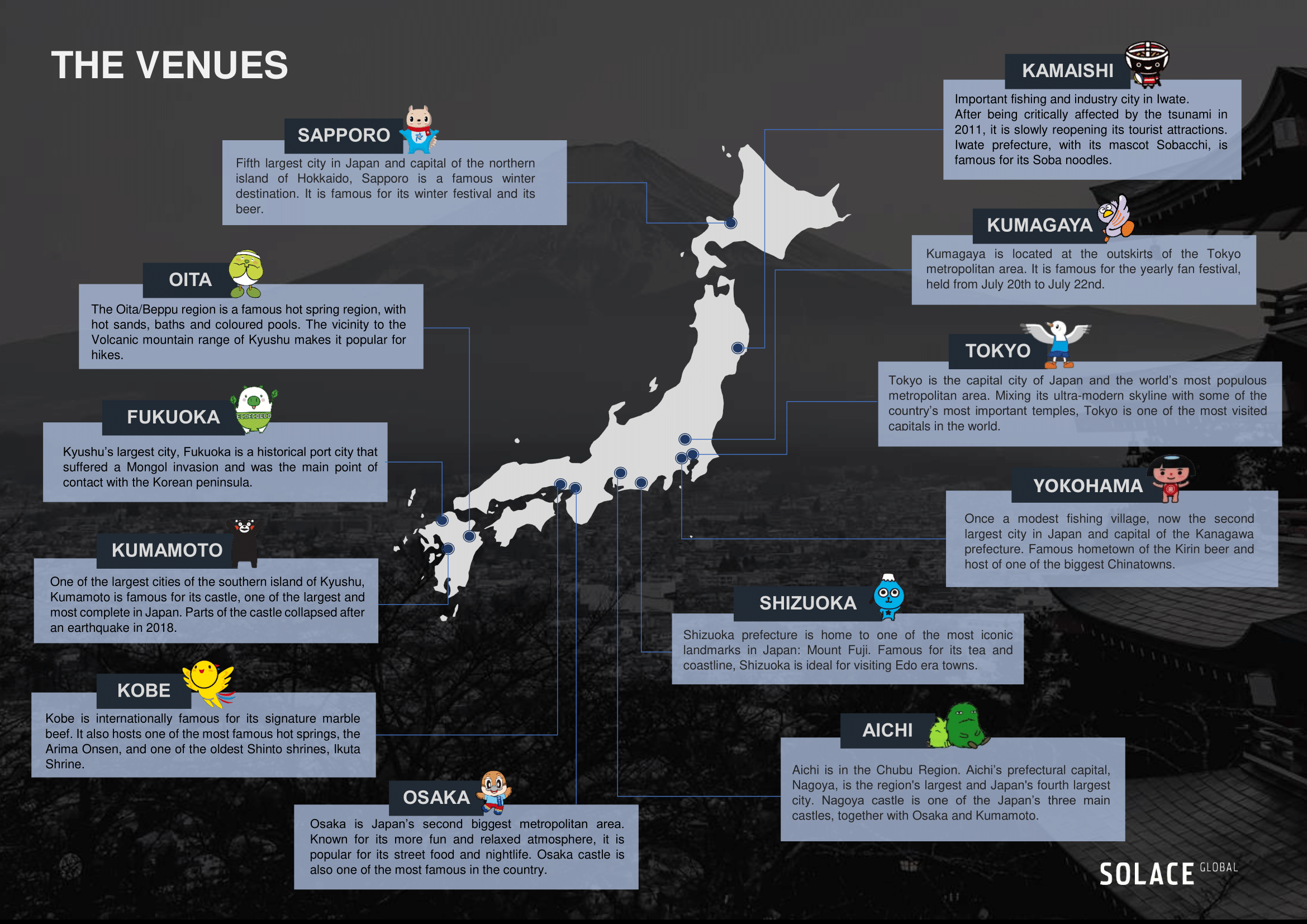 (Click the map to learn more about the tournament venues)

Japan is a safe country, the main risk to travellers visiting stems from environmental factors. The World Cup is set to begin at the tail end of the typhoon high season. The country is also one of the most seismically active in the world. Japan also possesses a number of active volcanoes; however, the risk of these impacting travellers remains low.

On average, Japan sees eleven sizable typhoons per year, with the islands of Okinawa and Kyushu normally being the most affected. Typhoons are tropical cyclones typical of the Pacific Oceans and they are characterised by strong winds, large waves and heavy rains. The landfall of a typhoon can cause infrastructural damage, disrupt travel – particularly flights and ferries – and sometimes evacuation orders by the local emergency preparedness authorities. While there are no matches, scheduled to take place in Okinawa, three of the twelve designated world cup stadiums are in Kyushu. Keeping an eye on weather forecasts is always advisable during the typhoon season to avoid being caught unprepared.

Earthquakes are a common occurrence across the country. Minor quakes strike the country almost daily and result in no damage and are often barely noticeable. Major quakes also occur with a frequency unfamiliar to most of the western world and can result in damage. However, Japan is at the forefront in the field of disaster preparedness and management, due to the country being so prone to natural disasters. Most buildings and infrastructure are built in accordance to stringent regulations and utilise the latest technologies in order to prevent damage and collapse during earthquakes. Most buildings are also equipped with emergency kits that include dry food, water and medical supplies.

Japan’s advanced knowledge of earthquakes and innovative solutions in the field of emergency response were developed in the aftermath of two great disasters, the Great Hanshin Earthquake of 1995, the Great East Japan Earthquake of 2011, coupled with smaller and recurring episodes. Moreover, all Japanese citizens are trained in evacuation procedures and most of them have first aid knowledge, which facilitates the preventative and reactive operations. The Japanese government has a system of early warning alerting, which would push out a notification on all devices and televisions in case of an earthquake, tsunami or ballistic missile test.

The largest recent quake was the March 2011 Tohoku earthquake. This megathrust earthquake’s epicentre was located off the coast of the Oshika Peninsula. The quake was the strongest to ever strike Japan, with a recorded magnitude of 9.1 and 7 on the Japanese Shindo (seismic intensity) scale. It was followed by a tsunami with waves of 10 meters (33 ft) in height – though waves of 40 meters were recorded in some areas. Up to 18,430 people are reported to have been killed or are still missing.

Japanese coastal areas are built to defend against tsunamis, all of which have been bolstered since 2011. As such, the majority of small tsunamis do not pose a threat to the major urban centres. However, as was the case in 2011, waves of 10 meters+ have the potential of overtopping the defences.

The island also has a number of volcanoes; however, these pose only a minor threat with the majority being dormant for the past decades.

Japan is considered a very safe country, with crime rates among the lowest in the world. In addition to this, the Japanese law enforcement agencies have a high success rate in solving crimes that are carried out. Violent crime is also rare, although there is a significant presence of organised crime, often operating in and around entertainment establishments. However, members of criminal networks are unlikely to target foreign nationals unless provoked. Travellers should expect increased security measures and personnel during the duration of the world cup, further decreasing the risk of being a victim of violent crimes. Pickpocketing and petty theft remain the highest risk to anyone visiting Japan, particularly in large crowds and in the vicinity of tourist landmarks.

The risk of terrorism is low in Japan and, while there have been several highly publicised mass stabbings, these remain very rare.

The police in Japan have wide-ranging powers and they are lawfully allowed to hold potential criminals for up to 23 days, even for minor offences. Indeed, should you be charged with a crime, you are likely to be held, without bail, until your court date. 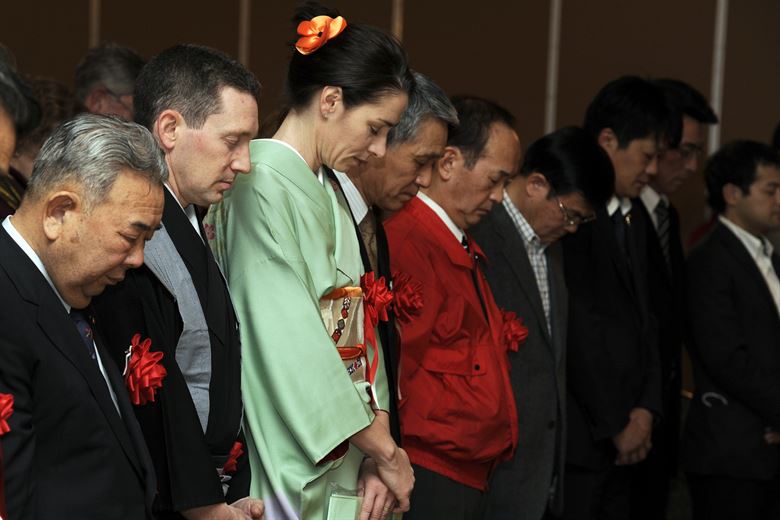 While visiting any country, it is important to be aware of cultural and religious norms and habits. The majority of people in Japan are friendly and hospitable, but they will tend to remain reserved. As such, loud and boisterous behaviour, especially in public, is uncommon. This is important to remember when the emotions of the world cup are running high in the 78th minute of a match.

Manners are also very important among the Japanese population, making it important to be aware of the basic rules.

Japanese people often greet each other by bowing, which is also a way to show respect. It is also customary to exchange business cards, which should be received with both hands and not immediately stored away, as that is perceived as disrespectful. During formal business dinners, keeping the cards on the table is also common.

Public displays of affection are not common in the country and it is better that visitors avoid them. Keeping phones on silent whilst on public transport is also the norm. Avoid taking calls or having loud conversations on any form of public transport.

Smoking in public and littering are frowned upon. Indeed, littering is seen as a sign of disrespect and could get you in trouble. It can also be frustrating when out and about as dustbins are few and far between; the majority of Japanese people take their garbage home with them rather than dispose of it when out. Smoking is mostly reserved for bars and pubs rather than the streets, where it is only allowed to smoke in designated areas.

LGBT rights in Japan are relatively progressive by Asian standards. This is partly due to Japan’s culture and major religions not having a history of hostility towards homosexuality. The majority of Japanese people support the legalisation of same-sex marriage and the younger generation are widely supportive of LGBT rights. However, Japanese society remains inherently conservative, where public displays of affections or sexual preference are considered mostly inappropriate. 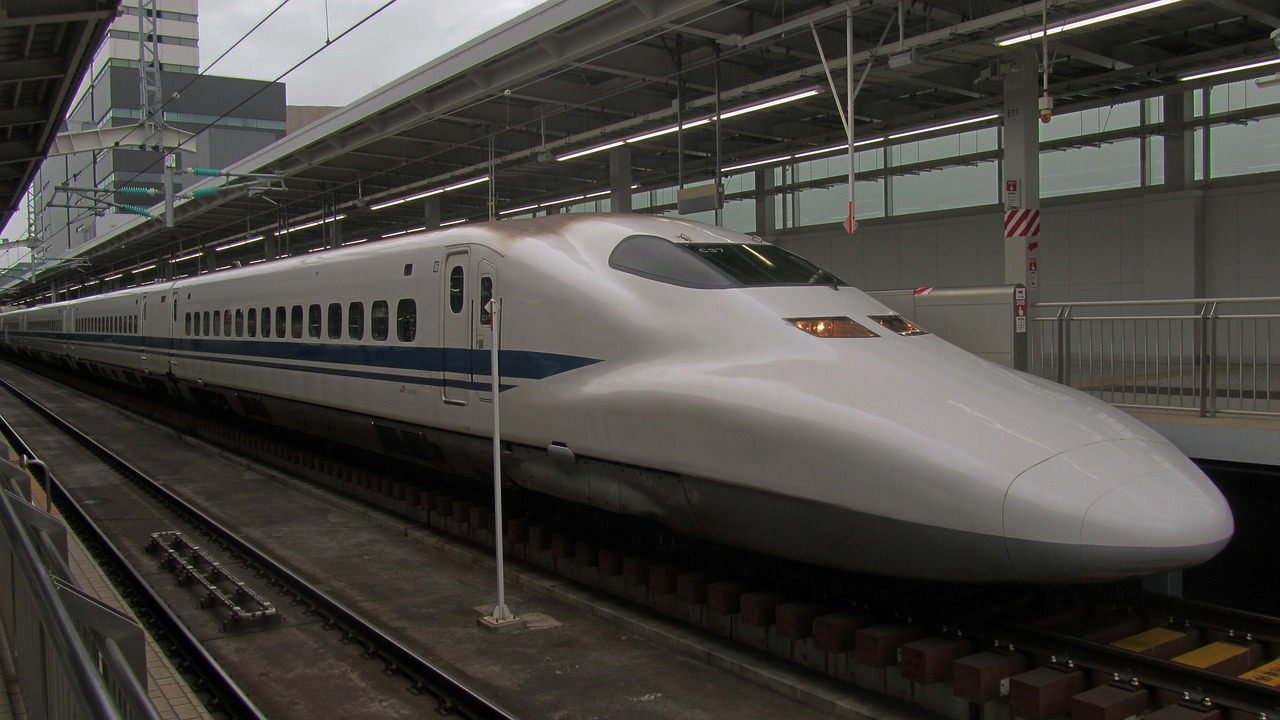 Travelling around Japan is simple once you have got used to the country’s public transportation network. For foreign nationals visiting the country, you can pre-buy Japan Rail Passes, which gives unlimited travel on all of Japan’s long-distance rail services. Be aware that due to the world cup, many trains, are likely to be fully booked, with seats pre-booked. Buying a rail pass before you arrive is highly recommended if you are planning to use the train a lot.

The country has one of the best transport infrastructures in the world with high-speed trains, extensive motorways and numerous large airports. However, it is important for those visiting for the first time, or even seasoned travellers, to be aware that the public transport system can be confusing. It is recommended that travellers schedule additional time for travel, as buying tickets and finding the right platform is likely to be challenging, particularly in large transportation hubs such as Tokyo and Osaka station. If in trouble, it is always a good idea to ask the staff, which will be able to guide you to the right destination. Trains are used by a large number of people for daily commutes, thus consider avoiding morning and evening rush hours if unsure about how to navigate the stations. Be aware that the fast trains – the shinkansen or also known as the bullet train – need a separate ticket and depart from specific platforms.

In major urban areas, navigating can take some getting used to but while signposts are in Japanese, the vast majority are also written in English. As such, those travelling for the World Cup, both for leisure and for business, should have no trouble getting from their accommodation to the venues. If uncomfortable using local trains or buses, taxis remain a safe and affordable option – just remember not to touch the car doors, as they are fully automated. Travel between cities, be it via plane, train or automobile is unlikely to present any significant risk. It is just vital you allow yourself plenty of time to navigate stations, double-check platform numbers and, where possible, simply ask for directions.

Foreigners can drive in Japan with an International Driving Permit; though, given the high quality of public transport, it is advised that you use other forms of transport.

Japan’s healthcare system is among the best in the world. Even hospitals in rural areas and smaller clinics are well equipped and staffed by highly trained medical professionals. However, travel insurance is a must, the cost of treatment in Japan is high and payment will be expected in full and upfront. As such, there can be delays in treatment while insurance is verified. Additionally, many doctors do not speak English, making communicating difficult.

Despite being held in autumn, the host cities will still be warm, with the exception of the northern cities of Sapporo and Kamaishi, which will be much cooler thanks to their more northern locations. Keeping hydrated and protecting yourself from the sun is important whilst travelling.

The laws surrounding prescription medication in Japan is much stricter and different to those in Europe or Australasia. This includes the use of items such as Vicks Inhalers, allergy medications and medication containing Pseudoephedrine. Indeed, some over-the-counter painkillers like those containing Codeine are also illegal and foreign nationals have been detained and deported for offences.

As such, if you are travelling to Japan with prescription medication, be aware of the possible restrictions on any said medication and even if what you are taking is legal, ensure that you have your prescription from your doctor with you at all times.

There is also a zero-tolerance policy towards all drugs in Japan. The penalties for possession, the use or the trafficking of illegal narcotics can result in long jail sentences and very heavy fines. 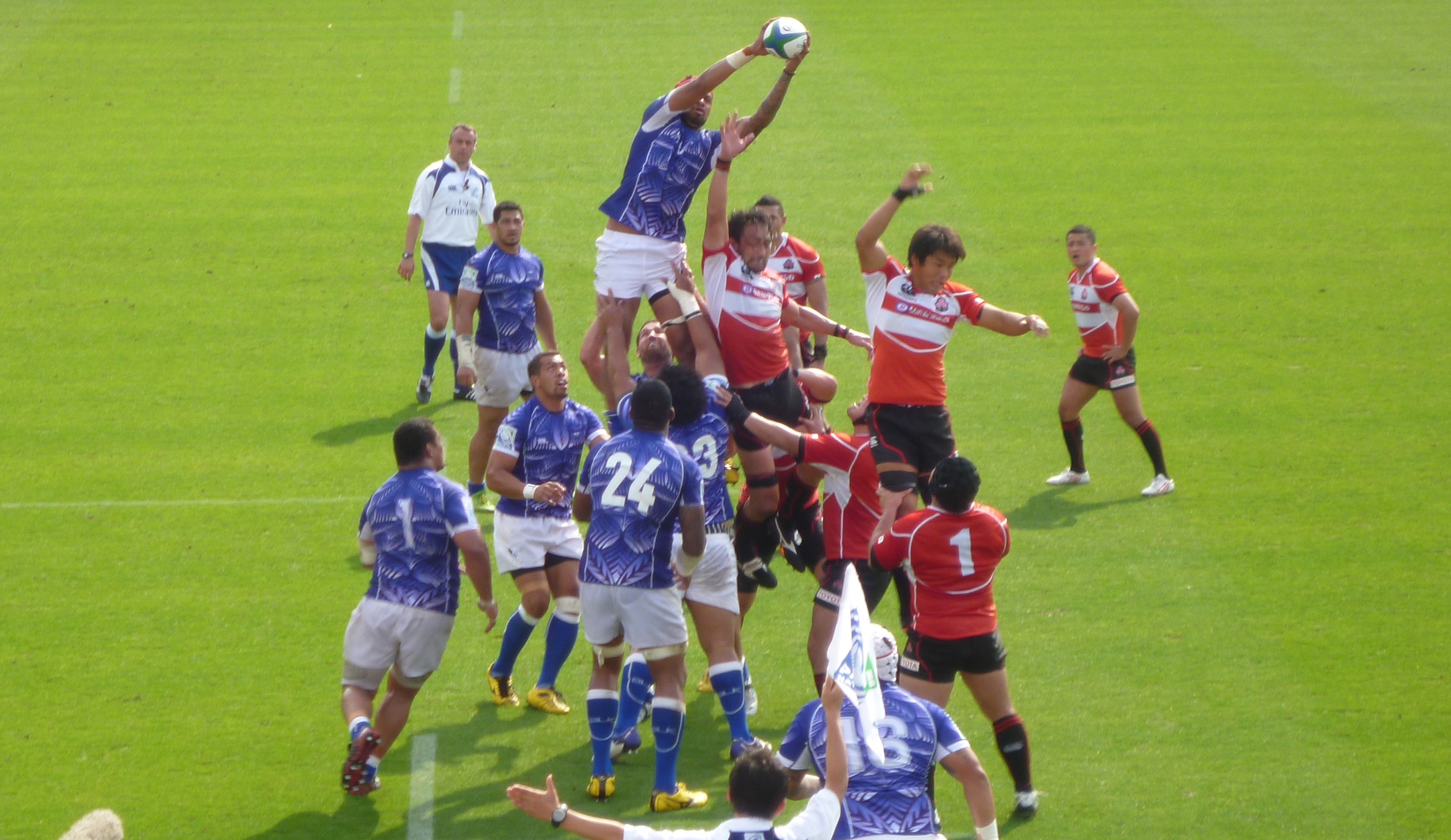