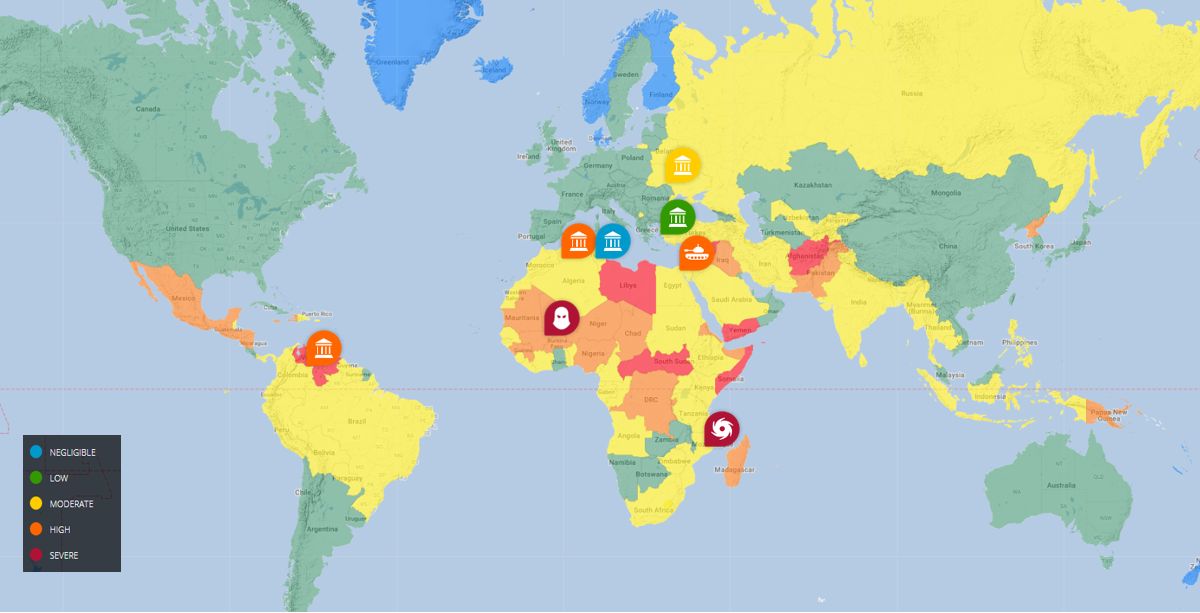 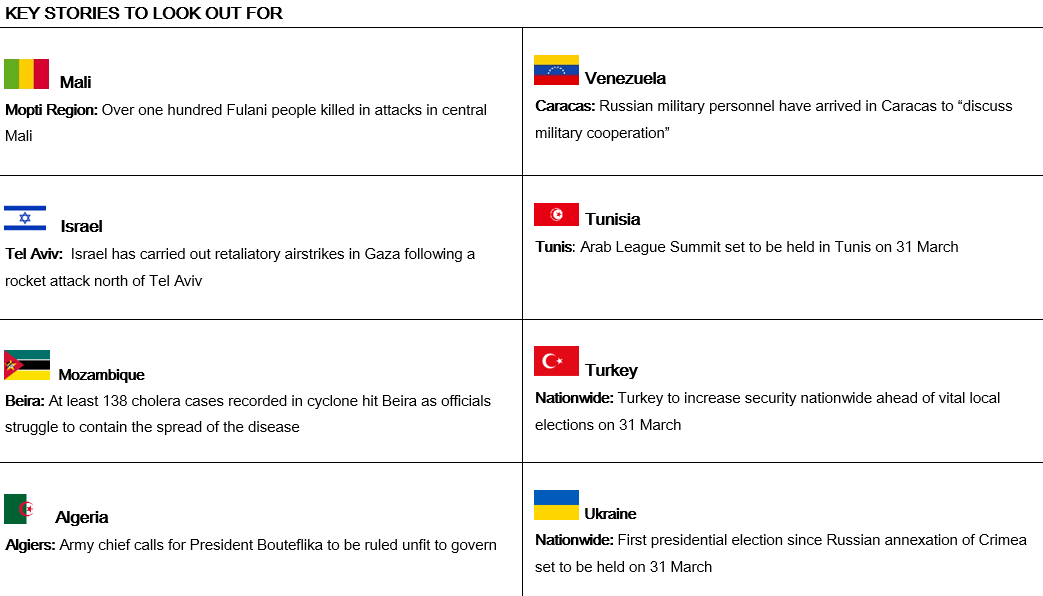 Over one hundred Fulani people killed in attacks in central Mali

Local reports now suggest that at least 134 Fulani herders have been killed in attacks carried out at the villages of Ogossagou and Welingara in the Mopti region, during 23 March. Gunmen, reportedly dressed as local Dogon hunters, encircled the villages and opened fire at the herders and their families, killing indiscriminately. Women, children and elderly people are said to be among the dead. Islamic Jihadist groups with links to Al Qaeda and the Islamic state are active in the region and it is suspected this attack has been perpetrated by such a group.

ADVICE: Travellers are advised against all but essential travel to Mali due to the presence of active Islamist terrorist groups. Travellers to Mali are advised to adopt enhanced security measures and have contingency plans in place for all possible emergencies.

Early on Monday, 25 March, a rocket struck the living quarters of a residential house in Mishmeret; hitting a residential house and injuring seven people. The rocket, understood to be a J-80 rocket, is believed to have been fired at its maximum possible range from an area near Rafah in the Gaza strip; evading Israel’s Iron Dome air-defence system.

Israel has responded to the strike as in retaliation to an attack; it conducted airstrikes on believed Hamas-controlled territories in Gaza and mobilized ground forces along the border. Reportedly several buildings associated with Hamas were destroyed in the process.

A ceasefire was reached thanks to Egypt mediation; however, this appears to have been disregarded by both sides with limited military actions continuing, despite not targeting residential areas.

During the crisis, and following a bilateral summit in Washington DC, President Donald Trump officially announced that the United States officially recognise Israeli sovereignty on the Golan Heights, contested territory and occupied by controversial settlements. The announcement has sparked international outrage and has been seen as a political stunt to support incumbent President Netanyahu ahead of the elections later in April.

At least 138 cholera cases have been recorded in Beira, Mozambique, following Cyclone Idai that struck the area on 14 March. The storm resulted in catastrophic flooding and killed more than 700 people across three countries in southeast Africa. Although there have yet to be any confirmed cholera deaths in a medical centre in Mozambique yet, at least two people have died outside of hospitals with symptoms including dehydration and diarrhoea. Additionally, a deceased child was reportedly brought into an emergency clinic earlier in the week also with symptoms consistent with cholera.

Communities in the region have been left isolated and stranded by the storm and are relying on heavily polluted water in order to survive. As such, it is highly likely that further cases will be reported in the coming days and weeks. Additionally, a rise in the death toll is likely in the weeks ahead, as aid organisations are struggling to provide assistance in the region.

ADVICE: Avoid all non-essential travel. To have a more in-depth look at the long-term impact of the cyclone, have a look at our Travel Advisory on Cyclone Idai:  https://www.solaceglobal.com/report/cyclone-idai-kills-hundred-causes-long-term-humanitarian-crisis-south-eastern-africa/

Following weeks of unrest in the country following President Abdelaziz Bouteflika’s announcement that he’ll seek a fifth term as president in the now delayed April elections, the country’s army chief, General Ahmed Gaid Salah, has stated that the president should be declared unfit to rule. The announcement by the head of the country’s highly influential military is an important step in the crisis. In fact, despite the ongoing unrest, announcements that Bouteflika would not seek a fifth term and delays to the election, an actual resolution appeared out of reach.  Overall, tensions appeared to be increasing and are sparking fears, both inside the country and in the international community, of a political crisis escalating into full-scale violence.

However, while some hope for a new Arab Spring 2.0 in Algeria, it appears that the current situation has greater similarities to Egypt in 2013 when the military removed the Muslim Brotherhood President Mohamed Morsi from the government. The military has put forward a suggested road map for the country to manage the transition following almost 20 years of Bouteflika rule. Simply replacing Bouteflika is unlikely to fully resolve the crisis, as the demonstrations have also been directed at the entire ruling elite – veterans of a long-since won independence war against France – plus, their allies in the army, businesses, legislature and unions. All these groups could lose significant influence through any succession; managed or not.

However, it is understood that the country’s opposition has rejected the army chief’s proposed road map. Several opposition parties and protesters denounced the general’s remarks as an attempt to stifle their movement; even as a breakaway faction within Algeria’s ruling party, National Liberation Front (FLN) has backed the call.

ADVICE: Travellers and businesses are advised to continue monitoring media sources and official announcements. The situation may escalate with little or no warning. Maintain flexible itineraries and be prepared to alter or cancel trips at short notice should tensions escalate. Additionally, be prepared for potential mobile network and internet outages.

The members of the Russian military who have arrived in Caracas will not take part in any operations according to the Venezuelan military attaché in Moscow. Instead, it is being reported that the military personnel have been deployed to the country to discuss cooperation. President Donald Trump has stated that “Russia has to get out” whilst also hosting self-proclaimed President Juan Guaidó’s wife Fabiana Rosales.

According to media reports, two Russian air force planes landed outside of the capital on Sunday, 24 March, carrying nearly 100 troops. It is believed that the troops were special forces and include cyber experts. Russia has not directly commented on the troops but did state that unlike officials in Washington “Russia is not threatening anyone”.

Solace Global Comment: The deployment of Russian military officials is likely an attempt by Russia to protect its investments in the country. Moscow has invested/lent/given billions of dollars in the past as well as playing an active role in joint ventures with the country’s oil industry. The deployment of troops is not a sign of an escalation at this time but may heighten tensions.

ADVICE: Continue to avoid all travel to the country.

Tunisia is set to host the 2019 Arab League summit at the Council of Arab Interior Ministers’ headquarters in the capital Tunis, on Sunday 31 March. Tunisian diplomats are hoping to play a mediating role in the summit, with the objective of projecting a unified opposition to President Trump’s recent acknowledgement of Israeli sovereignty over the Golan Heights.

However, bitter rivalries remain amongst member states which are likely to be exposed during the talks. The Gulf states of Saudi Arabi and UAE are unlikely to express strong statements of condemnation in an effort to maintain good relations with the US – who are currently putting pressure on their main rival Iran. Moreover, member states have differing views over the current conflicts raging in Yemen and Syria, the latter remaining suspended from the league since the beginning of the uprising against Bashir Al Assad in 2011.

Police and military personnel have been deployed across the city and security has been tightened at both land and sea borders in the run-up to the summit. Although no specific threats have been identified, the summit could be viewed as a high-profile target by terror organisations or as an opportunity to protest a multitude of issues affecting the region.

ADVICE: Travellers are advised to expect heightened security in the city and to anticipate delays to journeys.

Turkey is set to elect mayors and local officials on 31 March in a race that is seen as a test for President Recep Tayyip Erdogan’s ruling party following last year’s crisis and the ongoing economic instability. These are the first elections since the 2018 presidential election, which saw the implementation of the major constitutional changes introduced through popular vote in 2017. The referendum made the president both the head of state and the head of government in Turkey; take over the latter role from the now-abolished role of the prime minister. As such, these elections are seen as a major test for Erdogan and his Justice and Development Party (AKP).

The last regional elections in March 2014 resulted in the victory for the governing Justice and Development Party (AKP), who won both Istanbul and Ankara. The main opposition Republican People’s Party (CHP) came second, winning control of İzmir, Turkey’s third largest city. The elections, including the presidential elections in 2018, carried accusations of electoral fraud and malpractice which sparked numerous protests nationwide.

Turkey is preparing to increase security measure nationwide ahead of the election due to the risk of unrest but also due to the threat posed by the outlawed Kurdistan Workers’ Party (PKK). Violence cannot be ruled out.

ADVICE: Travellers should keep abreast of the latest information as there is the potential for protest action and counter-demonstrations during the campaign period of the local elections. These protests may also escalate into violent clashes in some areas; however, this risk remains low at this stage.

Ukraine is set to hold its first presidential election on 31 March; with the second round of voting being carried out on 21 April if no candidate receives an absolute majority. There are 34,544,993 people are eligible to vote in the elections; however, roughly 12 per cent of the eligible voters will not be able to participate due to the annexation of Crimea by Russia as well as the continued separatist occupation of eastern oblasts of Donetsk and Luhansk.

By barring a number of voters due to the occupation of Crimea and the ongoing conflict in the east of the country, Russian leaning candidates are highly unlikely to gain much ground in the election. Indeed, the main Russia-leaning candidate, Yuriy Boyko, is currently polling fourth behind former comedian Volodymyr Zelensky, current President Petro Poroshenko and Pro-EU politician Yulia Tymoshenko.

ADVICE: Travellers are advised that while normal travel to the majority of Ukraine can continue, a heightened security presence and police checkpoints should be expected. Monitor all official announcements and the latest media reports for further information regarding the elections and the security situation. If possible, as a precaution, consider deferring travel this weekend (30 March- 1 April) in order to minimise potential risk to travel. Russian travellers should ensure they have adequate documentation justifying their journeys and should also be prepared for entry being barred.

Travel to the eastern provinces of Donetsk and Luhansk and to the disputed Crimea should be avoided and is banned to all except those with a specific purpose (journalists, aid workers or other non-governmental organisational workers). Additionally, travel to Russian controlled Crimea may later impede travel to Ukraine and vice-versa.